We all know that sentiment on Gold is quite bearish. Rather than post numerous charts which you’ve likely already seen, I want to note some of the recent statistics. By recent, I refer to the past two weeks. Market Vane’s bullish consensus for Gold hit its lowest since 2001. SentimenTrader.com’s public opinion, which combines various surveys, touched its lowest level since 2004. GLD has seen outflows for 41 consecutive days. It’s monthly outflow was the largest since inception in 2007. According to BullionVault and COT data, speculative bets against Gold are the highest since 1999. The recent commercial short position was at its lowest since late 2008.

Anecdotally speaking, we see confirmation of sentiment at a major extreme. There has been an absolute explosion of negative press towards Gold. Before I wrote this piece I checked Bloomberg’s recent headlines for Gold. Here is a screenshot of the top results. Three of the four stories are questioning if the secular bull is over. 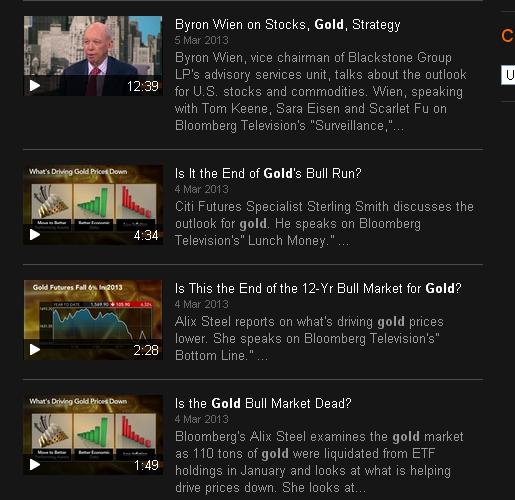 As I am writing, I notice that the top story on CNBC’s website is titled:
Gold’s Warnings Surge as Banks Jump off the Bandwagon.

Nomura is cutting its outlook citing a deteriorating investment environment. Analysts from Societe Generale say the market is in bubble territory. Goldman, BNP Paribas, Credit Suisse and Citi have all cut their outlooks in the past two months for Gold.

We have the majority of sentiment indicators showing more pessimism than in 2008, an explosion in negative news coverage and news that major banks have downgraded their outlooks. Without knowing anything else, you’d expect Gold to be down considerably, yet it’s only off about 5% year to date and 10% in the past three and a half months. Most important, Gold hasn’t even broken support! With this sentiment I’d have thought Gold would be trading at $1450 or $1500. Even Silver hasn’t broken its support. 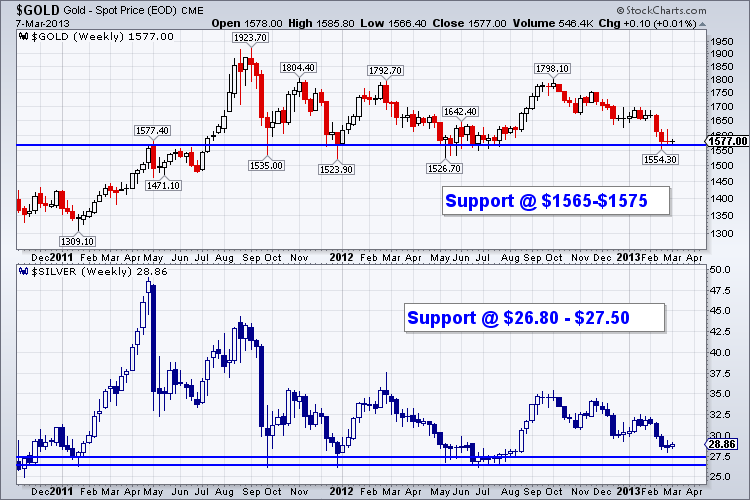 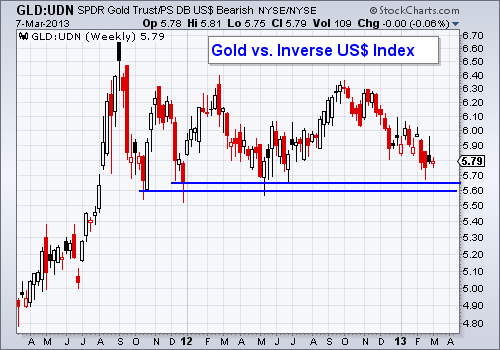 It’s clear that anyone who doesn’t believe in Gold for the long-term has sold and judging from the sentiment indicators, Gold is now in much stronger hands than when it was trading at these prices at the 2012 and 2011 lows. Thus, if Gold is able to hold this support and turn higher, it should approach $1750 to $1800 faster than one would think.

Could the mining stocks be leading Gold lower? It is possible but the HUI has bounced from major support at 337 which we identified several weeks ago. In fact, this was a very strong target because it was within half of a percent of the 50% retracement of the entire bull market and the 62% retracement of the 2008 to 2011 cyclical bull market.

Interestingly, as I watch one of the Bloomberg videos, I see that one of the recommended videos is titled: You Need to Buy Equities. Really? Equities are four years into a cyclical bull market and facing very strong resistance with hedge funds and professionals as bullish as they were in 2007. Back then, everyone cited the Fed’s money printing as the reason why equities would continue to make new highs.

Meanwhile, the precious metals complex is arguably at its most bearish sentiment since the start of the bull market 12 years ago. Either the bull market is over or this will prove to be a tremendous buying opportunity. At the same time, Gold hasn’t even broken support or made a new 52-week low. It shows you the amazing strength of this bull market. Despite all of the bearish sentiment, the panic and bad-mouthing, Gold (and Silver) has maintained its consolidation. This year will go down in history as one of the best buying opportunities for both the metals and the stocks. Regarding the stocks, you should begin your research with companies which are well funded that have not broken to new yearly lows. If you’d be interested in professional guidance in uncovering the producers and explorers poised for big gains in the next few years then we invite you to learn more about our service.