Kitco.com’s own new Gold price measure demonstrates that Gold has reached significant new all-time nominal highs. To quote from their website: “The Kitco Gold Index is the price of [G]old measured not in terms of US Dollars, but rather in terms of the same weighted basket of currencies that determine the US Dollar Index.” In other words, it is a non-U.S. Dollar based Gold price. And here’s the current 1 year chart of the Kitco Gold Index (KGX): 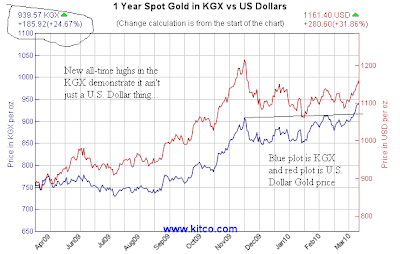 This is predominantly a reflection of recent Euro weakness, but new all-time Gold highs in Yen terms were also seen at the end of last week. All soft paper fiat currencies are sinking relative to the hardest of the hard currencies – Gold. This trend will continue for quite some time. The breakout in the kitco KGX index simply telegraphs a new pending nominal high for Gold in U.S. Dollar terms.

The 1 month and 2 month LBMA Gold forward lease rates have been abnormally “inverted” the last 9 days in row (you can check yourself here on the LBMA website), only the 4th such continuous “cluster” phenomenon in the last 6 years. Two of those times were during the August 2007 thru March 2008 Gold bull run and the other was during the Great Fall Panic of 2008. The physical markets are tight and a higher Gold price is needed to get participants to part with their Gold.

Though by no means impressive, Gold stock indices like the GDX ETF and $HUI Gold Bugs’ Index have been outperforming the price of Gold since the early February bottom. I took profits in Tanzanian Royalty Exploration Corp. (ticker: TRE) on Friday because it became overbought. I remain bullish on Gold and Gold miners, although I won’t put new money to work until a short-term pullback. I also took small GDXJ option call profits on Friday, though I retain large positions in GDXJ, GDX, GG, and AUY (and smaller positions in multiple other Gold miners). I took the GDXJ profits on my May option contract trade specifically due to time concerns (I get more and more uncomfortable as contract expiration draws near). Those who have followed my rants know that I am not the world’s greatest market timer.

I am seeking to re-deploy these just-taken profits back into the Gold patch. Because it is options expiration week, I am hopeful that we will get a decent one or two day pullback in the Gold miners. I am looking to buy August in-the-money calls on GDXJ once the opportunity presents itself.

The general stock markets keep holding on, much to the paperbugs‘ delight. Of course, there are a few investments that have outperformed the Dow lately. I can think of one off the top of my head… 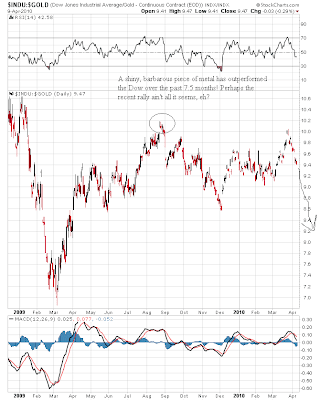 Platinum and palladium have been on fire and silver is outperforming Gold since the February bottom. For now, I’m just going to enjoy the ride.

How to be Disciplined Trading Gold with Cycles Analysis