At the start of the year we asserted that the mining equities could lead the metals higher. Since then, the shares have roared higher while the metals have remained subdued. Gold has gained a bit but Silver has really struggled. Why are the stocks performing so well if the metals are not confirming?

The main reason is the stocks led the metals down (specifically Gold) during the bear market. The chart below plots CDNX (Canadian juniors), GDXJ (US juniors), GDX (large caps) and Gold. Note that both junior markets peaked months before Gold. GDX technically peaked at the same time but began its topping process in December 2010, well before Gold peaked. 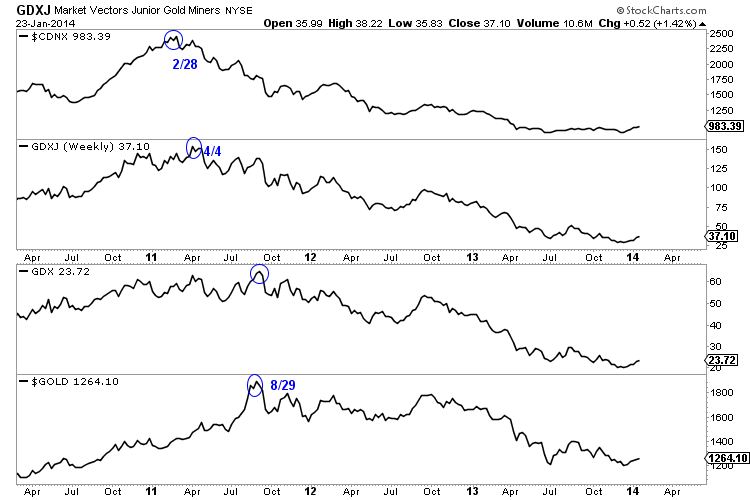 The stocks essentially began to underperform in December 2010 and then peaked a few months later. Most companies peaked even before Gold went parabolic! As a result, most mining stocks have been in a bear market longer than Gold and may have already discounted the worst. It makes sense that they would bottom first and there is a precedent for that scenario.

The chart below shows the action in the HUI and Gold during the 2000-2001 bottom. The HUI bottomed in November while Gold formed a double bottom in February and April. The HUI barely corrected when Gold declined to its first bottom. The HUI did decline nearly 20% before the April bottom in Gold but that was after it rebounded 70% in only four months. Moreover, the HUI exploded after Gold’s final bottom in April. 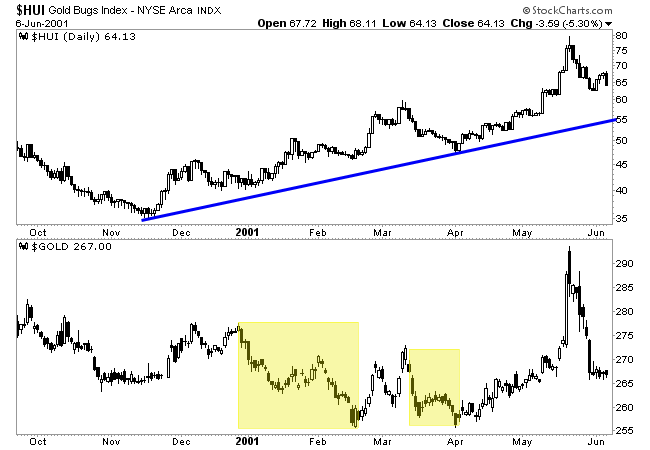 Moving along, another reason for stock outperformance is because the relationship to Gold recently reached a historic extreme. I am usually not a fan of comparing gold stocks to Gold. Over time the gold stock sector as a whole struggles to outperform Gold. It badly underperformed in the 1970s and has badly underperformed over the past five years. However, this relationship (gold stocks vs. Gold) recently hit a 70-year low! When something reaches that type of extreme, we have to take note. (Source: NowandFutures.com) 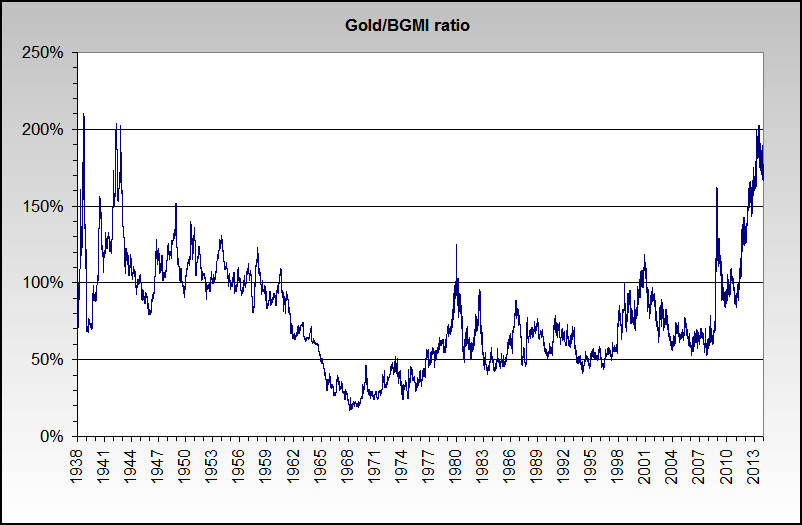 It turns out that there have been two great buying opportunities in the stocks (June 2013 and December 2013) with a possible third to come. During Gold’s final decline in 2001 the HUI shed about 20%. Yet Gold rebounded strongly and the HUI did too, exploding 65% in less than two months. If Gold hasn’t bottomed then its final bottom (presumably in the coming months) could offer another major opportunity for the mining stocks.

That being said, an investor should not wait for a correction or buying opportunity just weeks after an important bottom. What happened to those who waited for the S&P in 2009, the gold stocks in November 2008, the S&P in 2003 or the gold stocks in 2001? As we said last week, the risk has shifted from getting caught in a final plunge to missing out on the rebound. Make your list of favorites and selectively accumulate rather than chase strength. If you’d be interested in learning about the companies poised to rocket out of this bottom then we invite you to learn more about our service.