With all of the volatility of the past nine months, few market observers would think the gold equities have begun a series of higher lows or even a new bull market. However, this action is typical of this sector. GDX first formed a low in May followed by a double bottom low in July. From that point, GDX gained 35% in only two months! After three months and a pullback of 20%, the gold stocks are pushing higher once again and have a chance at a tremendous 2013.

There are two extremely important levels for 2013. The first is GDX 48 or HUI 460. The chart below shows $48 as the most important near-term pivot point. GDX has already made a series of higher lows but a weekly close above $48 would add stronger momentum and confirmation to the uptrend. Also note the positive divergences in the GDX vs. Gold ratio and the RSI indicator. 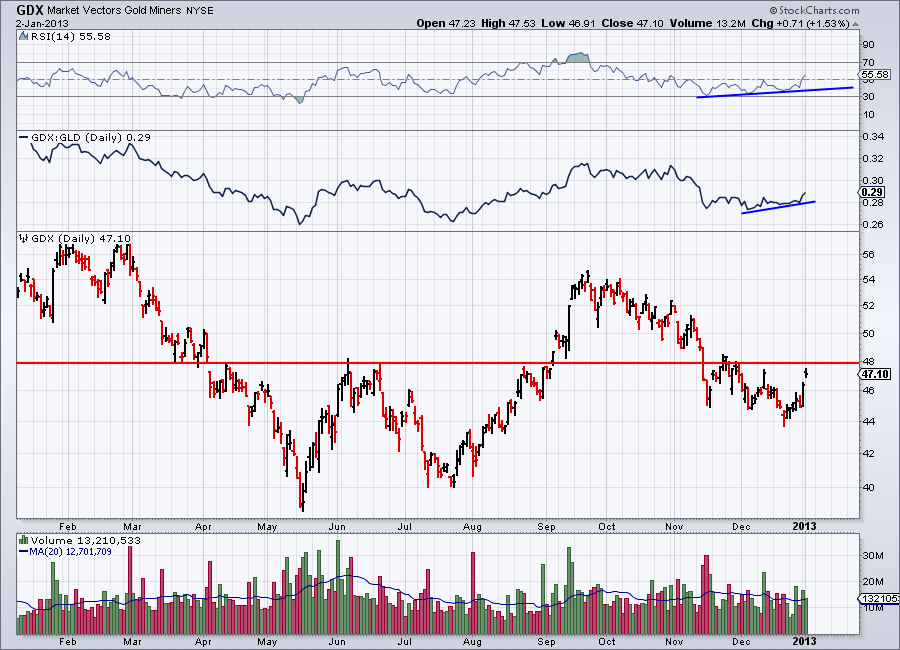 The weekly chart of GDX clearly illustrates our second important pivot point for 2013. Assuming, GDX closes above $48, the next important resistance is $55, the September high. Moreover, note that $55 was an extremely important level dating back to the end of 2007. It is obvious that $55 is far more important than the highs near the mid $60s. If GDX closes above $55, then every chartist will be ready to jump on the bullish bandwagon. (Note that they have not jumped on on yet. They have no clue now but will awaken after GDX is up another 20%). 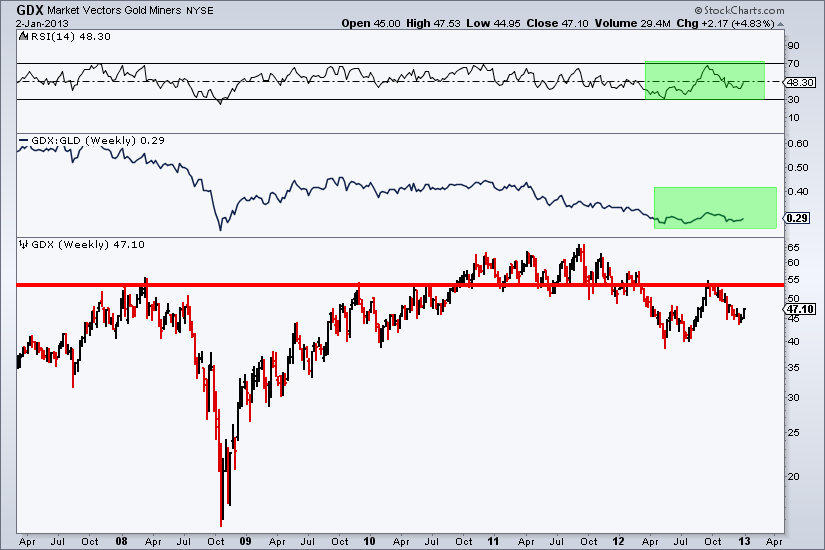 It’s also important to note the prognosis of the weekly RSI. After surging to 65, the RSI corrected to 40 but its curling up once again. A reading of 40 at a bottom (check) is typical of a bullish trend. Keep an eye on the weekly RSI as a move above 70 would be the first such move in six years! This market is slowly positioning for a big move in 2013 and 2014.

We have not been this bullish since May and August. The technicals look great and sentiment remains very favorable for longs. Meanwhile, valuations continue to be very favorable. As we’ve discussed in the past months, the miners are trading near historical lows in terms of earnings, cash flow and sales. A breakout in Gold past $1900 would certainly raise the low valuations and at a time when stronger metals prices would thereby raise earnings. It is a tremendous one-two punch that could launch this sector in 2013.

The key for traders and investors is several fold. First, you always need to plan with each trade and every investment. Decide how much you want to risk and how you will risk it. Second, in this sector you must employ effective market timing and proper stock selection. In the past year many stock pickers got killed because they couldn’t pick the right stocks and they didn’t cut their losses. If 2013 is a return to the bull for gold stocks, which I believe it is, then its time to do your research if you want to beat the sector. If you’d be interested in professional guidance in uncovering the producers and explorers poised for big gains then we invite you to learn more about our service.