If you are sick and tired of reading Precious Metals sentiment updates on this blog, I do not blame you. As an author of a contrarian blog, my job is to report as an objective view as possible of sentiment indicators developing within the various asset classes. Right now, it seems that Gold is one of the few assets experiencing negative extremes worthy of attention, from a contrarian point of view. However, some of the readers disagree. Due to overwhelming focus towards the PMs sector in recent weeks, various individuals seem to think that I have turned into a die-hard Gold Bug. Obviously this couldn’t be further from the truth. Let me explain.

Within similar context, between August 2011 and November 2011, readers of the blog also held a view that I was a perma-bull on equities. If one was to consider previous posts here, here, here, here, here and here, one should understand today (in hindsight) why I pushed major attention towards stocks over other asset classes. Stocks were extremely oversold and sentiment was extremely depressed between August and November 2011. Furthermore, on relative basis, global equities were very attractive against Precious Metals, Commodities and Bonds.
However, conditions have changed since those days. Stocks, particularly in the United States, have experienced a tremendous rally over the last two years. From the lows on 04th of October 2011 at 1075 on the S&P, the index is currently up over 45% and has become extremely overbought. At the same time, margins have started to contract and revenues/earnings are also following. As majority of the investors have missed the rally, they are not paying attention to fundamentals as greed blinds their judgement. They seem to be playing the usual chasing game over the last several weeks, with sentiment obviously turning extremely euphoric.
Furthermore, over that time frame, US equities have outperformed just about every other asset class out there, including Eurozone and Emerging Market equities, Precious Metals, Commodities and Bonds. Marc Faber recently described the current conditions stating that: “US equities have become the only game in town”. And we should all know how previous “only games in town” ended (in tears).

As I analyse the current market conditions, one of the only asset classes I tend to prefer today is Precious Metals sector. I recent weeks I have hinted at the extreme depressed sentiment including the following important indicators: The latest development worthy of “decade extreme” or “record extreme” within the Precious Metals sector, comes to us thanks to Mark Hulbert Financial Digest. According to Mark’s latest WSJ column, there has been a huge plunge in exposure of various Gold newsletter advisors. Currently, the Hulbert Gold Newsletter Sentiment index (HGNSI) is at -31% net short, a historical record low since the inception of the survey in 1997. Essentially, this means that the average Gold newsletter advisor is telling subscribers and various other clients to be short Gold with 31% of their portfolio.

As a side note, I would also like to remind blog readers that Hulbert Nasdaq Newsletter Sentiment index (HNNSI) is currently sitting at 94% net long exposure, equalling the euphoric sentiment of March 2000 just as the tech bubble topped. 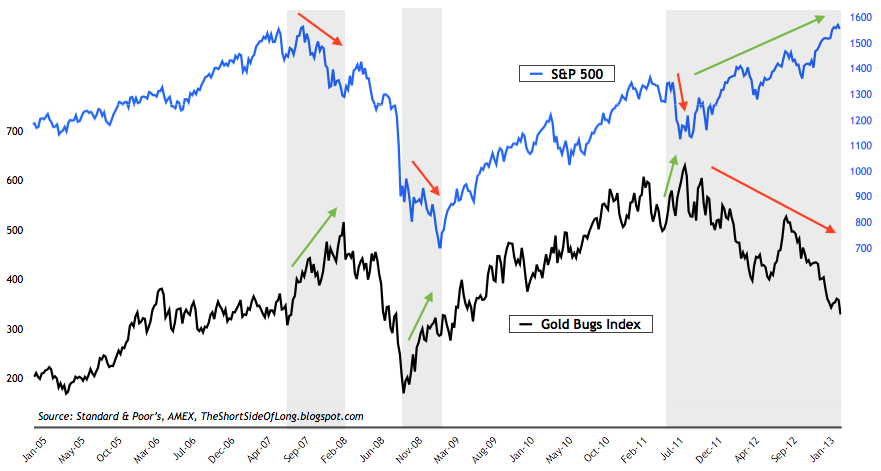 Source: Short Side of Long
All of these indicator readings mentioned above, added to the fact that just about every investment bank in the world has Gold on a sell signal, most likely suggest that we are approaching a meaningful low for the Gold and the rest of the sector.

In Similar fashion to equities during August to November 2011, Precious metals have vastly under-performed just about all asset classes, including Stocks and Bonds. While sentiment has never been the holly grail (no indicator or tool is), current universally pessimistic outlook on the PMs sector is bound to end up as an egg on the face of various Wall Street strategists, advisors, financial gurus, newsletter writers, hedge fund managers, retail investors and other speculators.