Longtime readers know that we are a huge fan of intermarket analysis which is a rather new field within technical analysis. I believe John Murphy developed this field, thanks to his book. Intermarket analysis is the analysis of the relationships between the major asset classes: stocks, bonds and commodities. Furthermore, evaluating and comparing the different sectors within those asset classes also counts as intermarket analysis. Essentially, it is comparing one market to another. Intermarket analysis is essential when analyzing the precious metals complex because it is always affected by or has some relationship to other markets. For example, strength in government bonds or strength in the US dollar is usually a headwind for gold. Likewise, strength in equities can be negative for gold as it shifts money from gold back into conventional investments. Today we are looking at US bonds and their effect on gold. Keep in mind the treasury market is the largest in the world. Upon that realization, one can easily understand why peaks and valleys in bonds have a substantial impact on precious metals.

In the chart below we plot TLT (Bonds), the HUI Gold Bugs Index (large miners) and gold. While bonds and gold have been the big winners since 2000, they remain uncorrelated on shorter time frames. In the chart we highlight four cases in which gold and gold stocks bottomed and bonds peaked shortly thereafter. Interestingly, bonds and gold were correllated in late 2007 to early 2008, in early 2010 and in the lead up to the Euro crisis in late 2011. 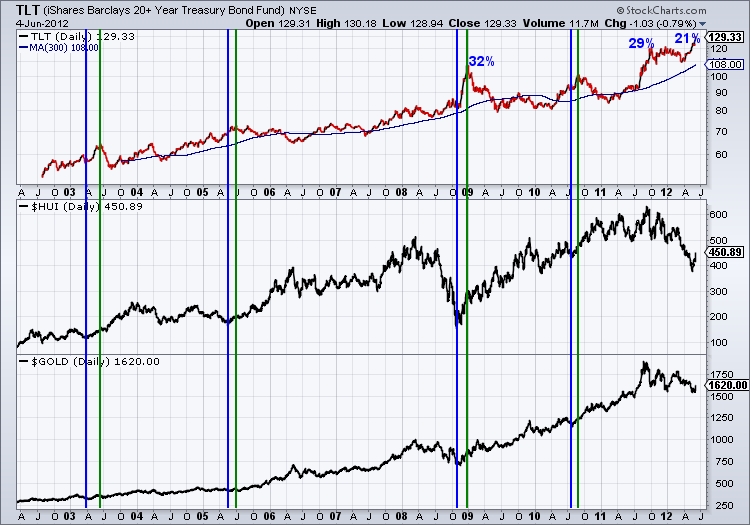 That being said, the largest advances in gold and gold shares have occurred when bonds were forming an important peak. There was a positive correlation in the summer and fall of 2011 but that reverted to negative three months ago. It is important to note that gold and gold stocks typically bottom ahead of a peak in bonds (and trough in interest rates). Thus, we will be looking for evidence of a peak in bonds to confirm the major low in precious metals.

Below we show the Market Vane bond survey (source: sentimentrader.com) which shows 77% bulls. Note that the major peaks in the bond market in 1998, 2003, and 2008 coincided with readings of 90% bulls.

A peak in bonds would certainly give a lift to gold because bonds, aside from being the largest asset class by far appear to be the only asset class holding gold back. In the chart below we plot gold against foreign currencies, equities, oil and commodities. Gold looks healthy against foreign currencies while it has bottomed against equities. Relative to commodities, Gold has made a new high. 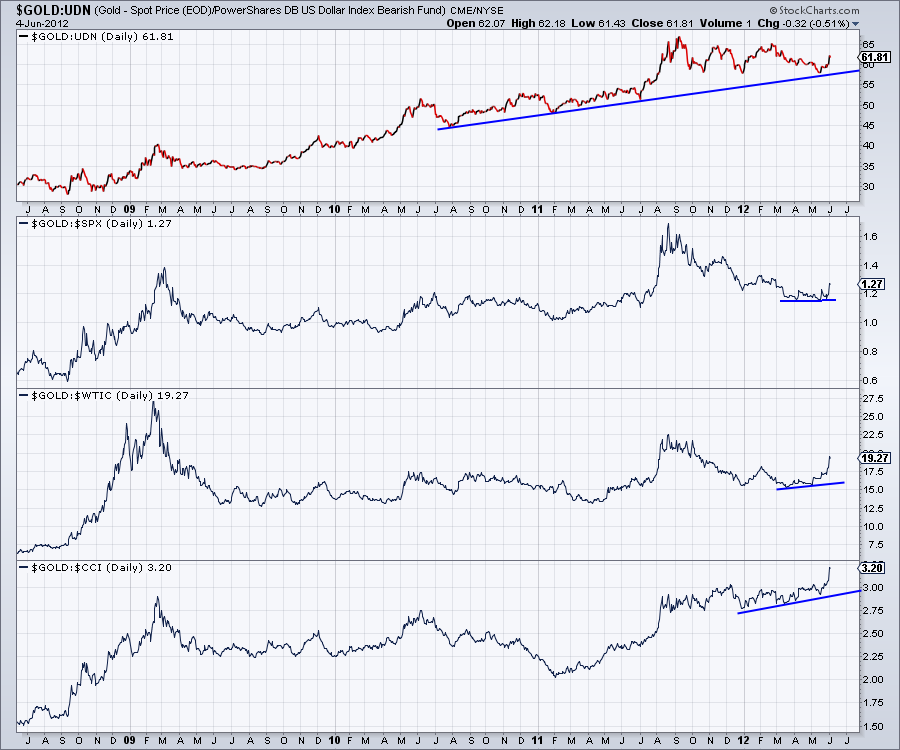 In summation, the precious metals complex has put in a bottom and an ensuing peak in bonds would not only confirm the bottom but would add fuel to the rebound. That being said, we feel bonds have more room to move. TLT closed at 129. We have a technical target of 145. That seems extreme but note that the percentage of bulls needs to rise another 13% before sentiment hits a true bullish extreme. As we noted, precious metals typically bottom one to two months before bonds peak. Thus, we could see some backing and filling in the complex until bonds peak. The start of a new cyclical bull market in gold and the gold stocks will not be confirmed until we see an important top in bonds. In the meantime, we continue to focus on the companies best positioned for and most likely to take advantage of the inevitable next leg up in this bull market in precious metals. If you’d be interested in professional guidance in this endeavor, then we invite you to learn more about our service. Strong Evidence of an Important Low in Gold Stocks