Two weeks ago we proclaimed a major bottom could be imminent in the precious metals sector. Our basis for making the prediction was that the metals and shares were extremely oversold, breadth indicators were at 2008 levels, sentiment was contrarian bullish and markets were nearing areas of strong support. In this missive we review the compelling evidence for this important bottom and discuss the potential fundamental driving forces for the start of the next cyclical bull market in this sector.

Two weeks ago GDX formed a bullish reversal at the 50% retracement (2008-2011) amid an all-time high in weekly volume. The market showed excellent follow through last week as it gained 7.9% on substantial volume. Also note that the 4-week moving average of the bullish percent index (a breadth indicator) reached the 2008 low. 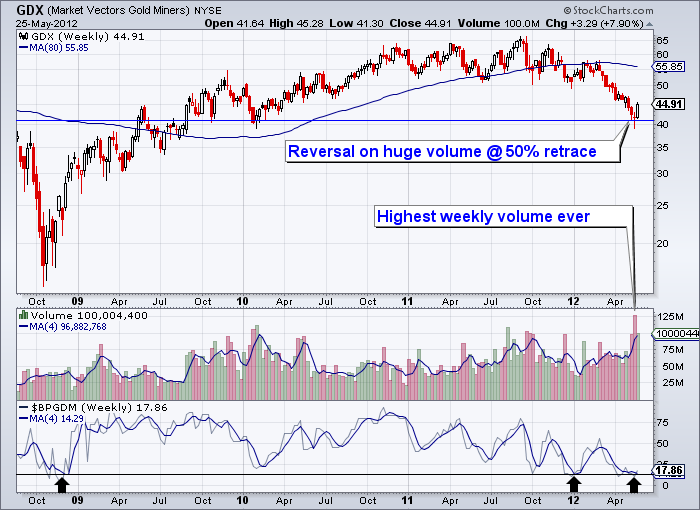 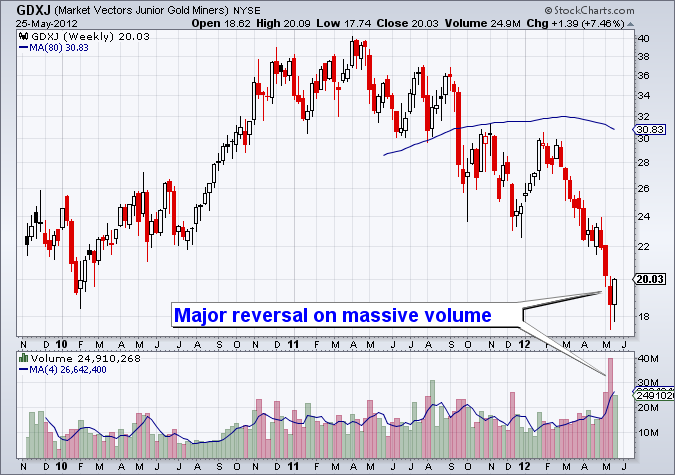 Also encouraging is the relative strength of the shares which usually lead the metals at key turning points. In the chart below we plot Gold, GDX, and GDXJ. Note the positive divergence in favor of the shares. 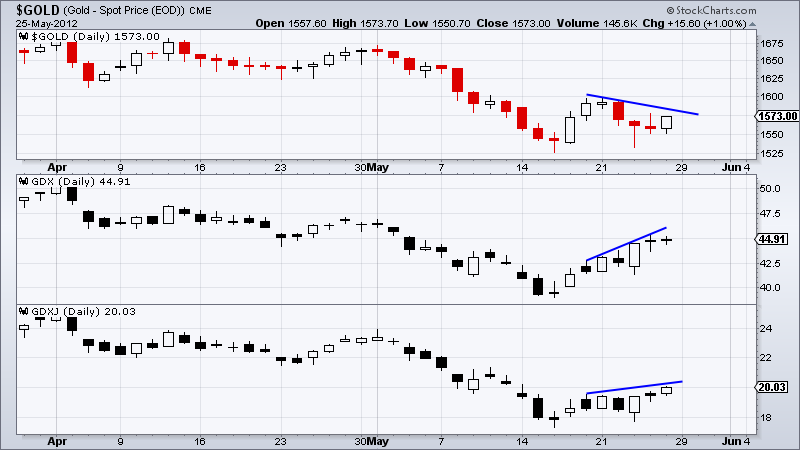 The length of the current cyclical bear market (because that is more apt than “correction”) implies that the sector should soon begin a new cyclical bull. The HUI (large caps) Gold Bugs Index has endured three primary corrections or cyclical bear market downturns. The 2004-2005 consolidation lasted 18 months and declined by 37% while the 2008 downturn lasted six months but declined by 71%. The recent cyclical bear has lasted 18 months and declined by 42%. Corrections or bear markets are a function of price and time. Typically, less severe downturns will be spread out over a period of many months while the most severe downturns tend to culminate quickly (2008). 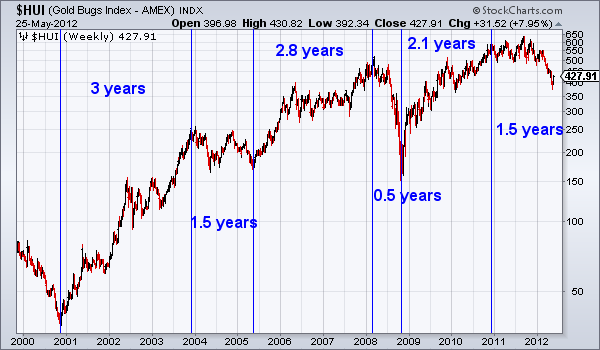 Though the HUI was only in a bear market for six months in 2008, most gold shares peaked sometime in 2007. Some peaked at the end of 2007 while some peaked in April 2007. Below we show an index which consists of 20 companies (most of which are producers too small for the HUI) and has a median market cap of $900 Million. It peaked in April 2007 and would bottom 16 months later. Each counter-trend move has lasted 16 to 18 months. This bear market has lasted nearly 18 months and at the recent low, was 50% off the high. 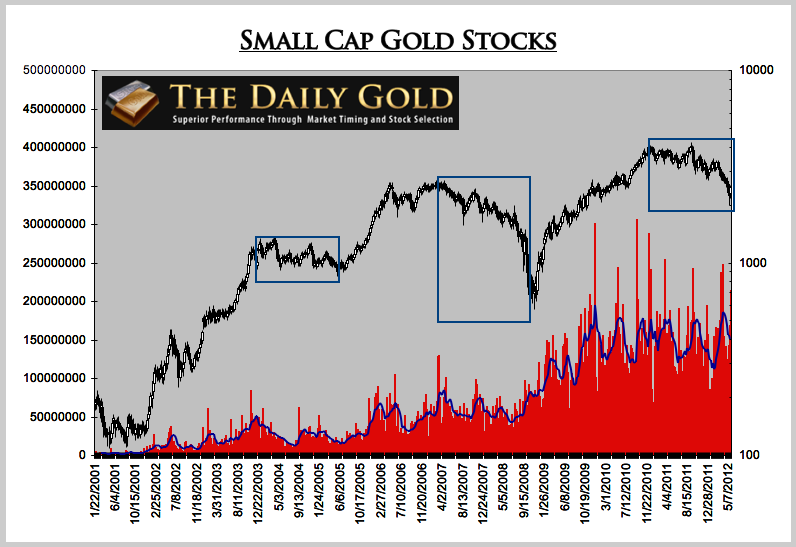 Clearly, we have presented some compelling evidence that the gold shares have completed an important bottom. A rebound is underway and should continue well into June. However, until we see a successful retest of this low we have no way to confirm if this is the start of the next cyclical bull market. We technicans sometime feel that we can call every tick and turn of the market. We must remember that fundamentals drive markets and trends. Technicals are a context, not a catalyst. That being said, technicals lead fundamentals and reflect fundamental themes as they develop under the surface.

Positive fundamental catalysts include the likelihood of a new rate cutting cycle in China, the inevitable monetization of European debts by the ECB and the potential for a shift in Fed intentions given global economic uncertainty amid falling inflation and weak commodity prices. Our job is to weigh the technical and sentiment data in tandem with the potential positive and negative catalysts. Should these aforementioned catalysts emerge in tandem with favorable technicals, then we’ll have stronger confirmation of a new cyclical bull market. In the meantime, we continue to focus on the companies best positioned for and most likely to take advantage of the inevitable next leg up in this bull market in precious metals. If you’d be interested in professional guidance in this endeavor, then we invite you to learn more about our service.