I can promise you that the hard Gold bull crowd had to sit thru YEARS of irrational market behavior in the general stock market leading up to the 2000 peak in general stocks. While Gold stock languished in the late 1990s, the NASDAQ bubble rose higher and higher. We are going to have the same thing during this secular Gold bull market. You should expect the price of Gold and Gold stocks to rise higher than justified by the fundamentals in the Gold market. We are a long way from this point but it will happen at some point. In fact, I think the party in the Gold patch is going to get started this year.

When thinking about what is to come in the Gold patch, it is important to understand the irrationality of herd behavior. We have seen it before (Japan in 1980s, NASDAQ in 1990s, oil and housing in 2000s, etc.) and we will see it again. The more things change, the more they stay the same. During a secular credit contraction in the private sector (i.e. a Kondratieff Winter or economic depression), Gold becomes the “go to” asset. Fear and greed are different sides of the same coin and the scramble to protect what one has earned and make up for what one has lost are powerful motivators.

If you think last fall was “frothy” in the Gold market, you ain’t seen nuthin’ yet. I think Gold stocks are going to outperform the Gold price over the next year because Gold stocks are historically undervalued relative to the Gold price, whether the nominal or “real” price of Gold is considered. Mr. Market will correct this imbalance. I believe this process is on the threshold of starting, which is why I have been so bullish throughout this early 2010 correction and during what I suspect is an early uptrend since early February in Gold and Gold stocks that will soon lead to new highs in both.

Since history rhymes (rather than repeats exactly), I continue to look to the secular bull market so far for clues to the future. We are set for the sweet spot of the current cyclical Gold stock bull market that exists within the context of an ongoing secular Gold bull market. The point of recognition is upon the unsuspecting public and most don’t even know it yet. The institutional investors are slowly starting to nibble and many are about to start taking large bullish bites in the Gold patch. This is a small market sector, folks. Big money moving in is hard to hide when it comes to the Gold mining sector.

My favorite secular road map when it comes to Gold stocks and their valuation relative to Gold is to simply divide the “price” of a Gold mining index by the price of Gold and plot it over the long term. This isn’t a perfect method to value Gold stocks as a sector, by any means, but it at least shows what’s been reasonable over the course of the past decade. I prefer to use the unhedged Gold Bugs’ Mining Index ($HUI), but let’s take a look at the stodgier blue chip Philadelphia Gold & Silver Mining Index ($XAU) divided by the price of Gold (i.e. $XAU:$GOLD ratio chart) using a weekly plot over the past 11 years: 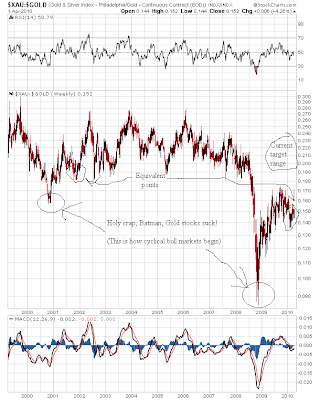 Now, this is obviously bullish for Gold stocks in the intermediate term, but one has to think bigger when thinking of a secular bull market. For perspective, here’s a 20 year chart of the $XAU:$GOLD ratio: 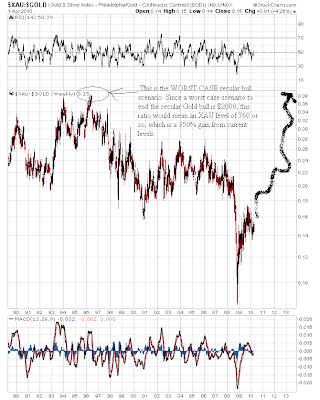 Now I personally have bigger goals and see things even more bullishly in the Gold patch, but my comments in the chart above are the worst case scenario for buy and hold blue chip Gold stock investors from current levels. This of course ignores dividends, which should start to grow significantly for blue chip miners over the next few years. Gold is safer, to be sure, but a basket of blue chip Gold miners at this stage of the economic cycle is pretty safe relative to the potential reward now that we have made it to the other side of the Great Fall Panic of 2008. By this comment, I don’t mean to say that the general stock market can’t or won’t make new lows. I mean to say that Gold and Gold stocks are set to disconnect from the general stock market when taking an intermediate-to-long term view. Don’t believe it can happen? Then you haven’t studied your market history.

Thursday’s move in the Gold mining sector was quite bullish and may be the beginning of the big move I have been (not so) patiently waiting for. If so, April should be a fun month for Gold investors. Everything is lined up perfectly, but only Mr. Market knows for sure if Gold stocks are going to deliver. I remain wildly bullish on all things precious and metal and I think Gold stocks are going to be star performers over the intermediate term.