Charts speak more eloquently than I can and they speak a brutal truth. Perhaps it is my scientific background or perhaps I appreciate the art that can be found in price charts. In either case, I prefer the message of charts to CNBC blowhards and other so-called experts.

Anyone who currently has excess savings they want to invest is in the minority of the world’s population. They are also likely “rich” and “evil” according to populist sentiment. In any case, these aren’t the best of times for advanced/Western economies.

We are currently in the midst of an unmistakable secular bear market for general equities in the United States. Such bear markets don’t end with the current obscene valuations and they don’t end because government saves the day. If it were only true, writing everyone a check for $700 billion dollars (i.e. treating everyone like a Wall Street bank) would bring endless prosperity and create an endless bull market.

The piper waits patiently, knowing that he will be paid. Currency debasement and allowing survival of the most unfit is not the way to restore a secular bull market. Ask Japan how QE1, QE2, and QE3 helped their stock market for the long haul.

Speaking of Japan, do you realize that we are on a similar course when stock markets are priced in Gold? I am not saying deflation of inflation, I am saying “priced in Gold.” Only Gold bulls are used to such pricing strategies, but it is time for reality to intrude on the paperbug world. 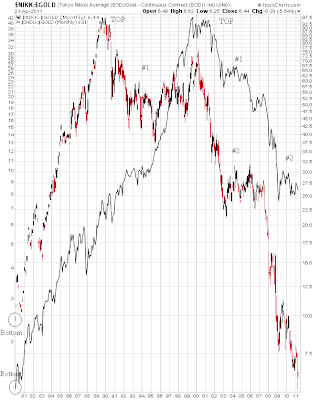 Same chart with a phase shift, no? The corrections in this ratio lasted longer for Japan because they entered their secular depression when everyone else’s economy was booming. We don’t have that luxury, so our corrections in the Dow to Gold ratio have been shorter. We are about to begin the biggest leg down in this ratio since the “secular bear market” in this ratio began in 1999. This is not a drill and this is not a call for the end of the world. Be careful out there if you’re not in the precious metals sector.