Another update of the chart below that last appeared in this section about four months ago (see Volume V, Issue 22) is in order after the recent rise in the price of gold to a new all-time high, the surge in gold and silver mining stocks in general, and the near vertical course that has recently been charted by junior mining stocks. 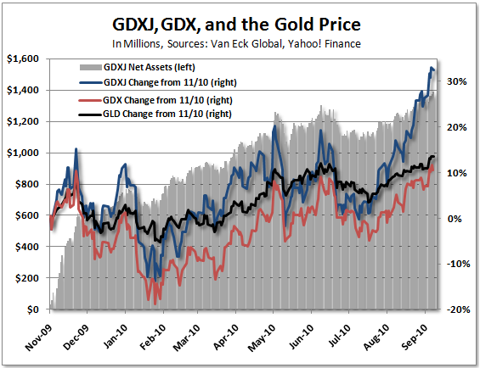 Any of you who own individual shares of these exploration companies are no doubt seeing some dramatic moves as well (though your results will vary based on your individual holdings) and the Market Vectors Junior Gold Miners ETF (GDXJ) provides an excellent gauge of how this sector is faring as a whole as shown above.

It has been an astounding move for GDXJ in just the last two months – up almost 40 percent since the July low – and, after retreating briefly over the summer, the net assets of this fund have now approached the $1.4 billion mark, an impressive feat indeed after having been launched less than a year ago.

The much larger Market Vectors Gold Miners ETF (GDX), with net assets that just reached the $7 billion mark, has also made some respectable gains over the last two months. Now up 16 percent from its summer lows, it trails the junior mining stocks by a wide margin in 2010 after outperforming the smaller stocks consistently in recent years when the appetite for risk was not nearly as a strong as it has been recently.

With gold again proving to be a far less volatile investment than mining stocks, as is clear to see above in the relative calm of the SPDR Gold Shares ETF (GLD) curve, it’s important to remember how investors’ views change toward these three very different assets when their appetite for risk changes.

Should the current buying enthusiasm continue, this chart will likely appear again sometime in the weeks or months ahead with GDXJ continuing its remarkable move higher and with even more astonishing returns. However, should investors grow more cautious amid a broad stock market decline, I wouldn’t be surprised to see the junior mining sector fall as fast as it has recently risen, recent examples provided above in January, May, and June of this year.

Investors Rush Into Gold and Silver as U.S. Treasuries Show Signs Of Weakness