Since the emergence of the European Debt crisis in April 2010, treasuries have been in a strong uptrend as investors have been seeking protection from risky assets.April to August 2010 was a deflationary period, similar to the fourth quarter of 2008 when treasuries soared higher before the massive government stimulus.  Stocks have been in a five month correction.  Now, in September 2010, long term treasuries are suffering a correction and break of long term trend support. 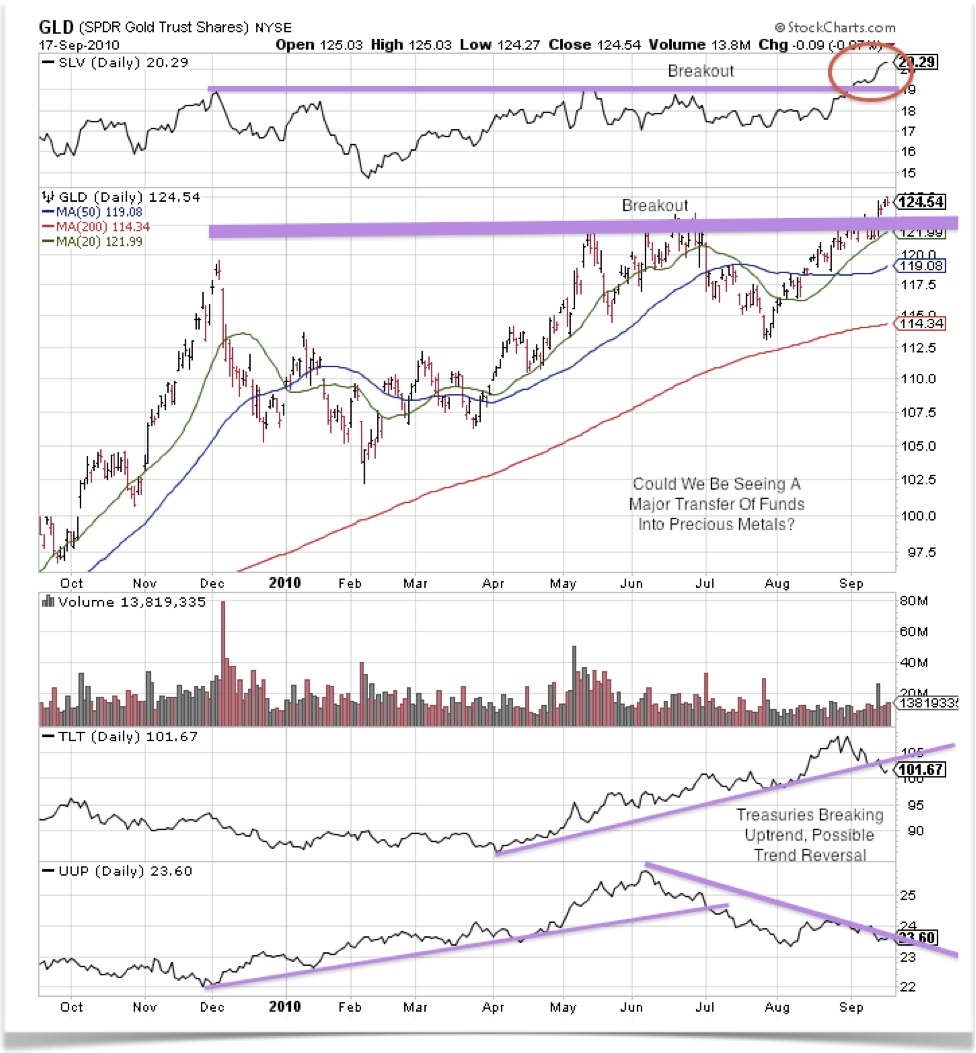 Long term treasuries are unable to find support at the 50 day moving average.  I highlighted a few weeks ago that treasuries appear to be making a top as the Chinese cut back on U.S. debt. The massive efforts from Washington to prevent a double dip appear to be putting a respite in the decline in equity markets.  It also appears that  The Fed will continue to easy monetarily during this crisis as they meet tomorrow and is expected to accommodate further.  The Fed has already stated that they will keep interest rates low well into 2011.  This is very bullish for silver and gold.

Efforts to deflate the currency have succeeded and now the dollar is challenging new lows and breaking through support.  Treasuries have corrected considerably along with the dollar.  Although the policy makers in Washington have revived the equity markets, the long term effect on the dollar and long term debt will be detrimental.  The markets are at resistance now and are very overbought.  I would consider being careful on this rally as a deteriorating currency and high unemployment will put pressure on the consumer.

The precious metals long term uptrend is in fact the best place to be during this ongoing debt crisis.  Now there is a massive flow to silver and gold.  I would not go chasing it now with the masses.  There will always be corrections and sales on gold and silver in a bull market as I highlighted to my readers four weeks ago right before the rally. Silver is especially overextended and could have a  healthy pullback.  There will be sales in the future as profit taking is imminent as it is overextended over its 50 and 200 day moving averages.  Subscribe to my free newsletter for trading signals and strategies at http://goldstocktrades.com.

It appears that the strategies from the central bank are now reflating the economy as gold, silver and base metals have reached new highs, while the dollar and U.S. treasuries are correcting considerably.   I believe the trend of sovereign debt defaults will continue and central banks raising their positions in precious metals.  This is the beginning of a major rush into gold and silver

We are currently seeing a huge transfer of capital into gold, silver and mining stocks.    I believe the best way to invest in emerging markets is to buy gold, silver and base metals that these countries are now importing rather than exporting.  I also see the possibility of the equity market, dollar and treasuries decoupling from silver and gold as they have made extremely upside breakouts since our bullish call on precious metals at the end of July. It has made an explosive move and is extended way above support and moving averages so a pullback is inevitable.  I am a long term silver bull but at this point would wait for a healthy pullback and secondary buypoints will be alerted to my readers first at http://goldstocktrades.com.