Many investors are struggling to understand the ramifications of the recently announced quantitative easing (QE) plan. The bottom line is that QE2 has major future implications for inflation and the price of gold and silver.
Just What is QE?
QE, or more simply known as money printing, is a dilution transaction similar to issuing more shares for a stock. The dilution has two primary affects: a decrease in the value of the initial shares and a redistribution of wealth from the original owners to the new owners.
The most significant difference between stock dilution and currency dilution i.e. QE is of course that publicly traded companies tend to use the funds raised through dilution to add value by investing those funds – whereas governments don’t add value by QE.
What is the Purpose of QE?
In the case of QE2, $900 billion will be diluted to purchase US treasuries so the primary benefactor of the QE will be the U.S. federal government and the financial institutions selling that debt. However, capital flows can rarely be controlled and the newly created money will find its way into other markets and asset classes.
Interestingly, the $100 billion per month figure that has been mentioned as the target rate for QE is almost exactly what is needed to roll over maturing treasuries coming due – so it could be argued that the plan is to effectively finance the U.S. federal debt which would eventually lead to a complete monetization of the treasury market. Supporting this argument is the recent projection made by ZeroHedge that the Federal Reserve will own more treasuries than China by the end of November.
How Does QE2 Size Compare to Other Markets
In an attempt to measure the above affects, we can compare the size of the QE plan to the size of several markets.

If the QE funds went into the currency market, its value would fall in half. However, $900 billion is roughly 6 percent of U.S. federal debt. Inflation is defined by the growth in the money supply. If using M2, the QE plan would dilute the money supply by 10 percent. $900 billion represents 36% of the world’s gold supply, so an equivalent move upward in price could be seen if the money finds its way into the gold market. QE is 37 times the size of the world’s estimated silver supply so a flow of capital into the silver market could be explosive (see more here). 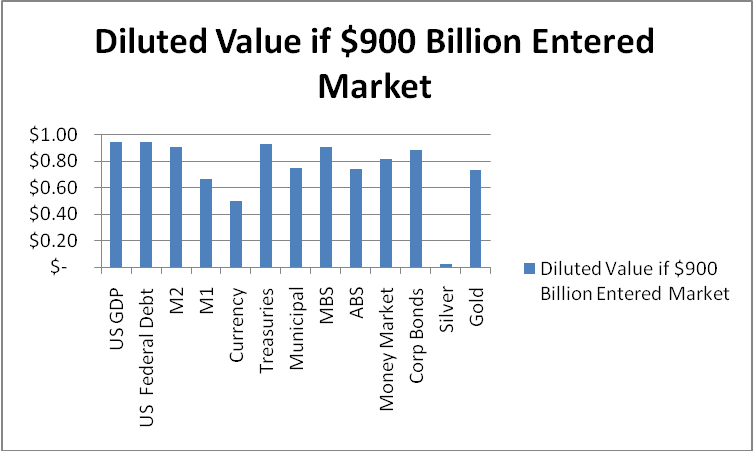 A dollar on November 1st is now worth 92 cents if measured in treasuries or 91 cents if measured with the money supply. It can be seen that inflation as measured by the growth in money supply is projected to increase by 10 to 20 percent on an annualized basis (see more here).
Conclusion
The result will be a double digit real negative interest rate and a carry trade opportunity to sell treasuries and other U.S. dollar secured paper at a cost of near 0 percent while accumulating real assets such as precious metals and other resources that cannot be diluted.
The QE2 bottom line: got gold? More importantly: got silver?

Chris Mack is President of Trade Placer (tradeplacer.com) which provides an easy way to buy or sell precious metals and facilitates real-time precious metals trading at the lowest possible price. Mack is a frequent contributor to both www.FinancialArticleSummariesToday.com “A site/sight for sore eyes and inquisitive minds” and www.munKNEE.com “It’s all about MONEY”. Mack can be contacted at info@tradeplacer.com
.
Previous