Let me start out by asking a few questions. How many of you were pro-bailout? How many pro-healthcare? How many think borrowing trillions of dollars to “stimulate” will really have any long term effect what-so-ever on the economy? How many realize that borrowing and spending really isn’t the cure for a problem caused by too much debt and too much consumption?

Let me start out by asking a few questions. How many of you were pro-bailout? How many pro-healthcare? How many think borrowing trillions of dollars to “stimulate” will really have any long term effect what-so-ever on the economy? How many realize that borrowing and spending really isn’t the cure for a problem caused by too much debt and too much consumption?

Now let me ask another question. Aren’t our politicians supposed to represent the will of the people?

I’m going to assume that the vast majority answered no to the above questions and yes to the last one. If that is the case then why in the hell did we hand over billions and billions of dollars to the banking industry? Was that in our best interests? How on earth did the health care bill get passed? And why, why, why are we throwing trillions of dollars down the drain in stimulus that has no earthly chance of having any long term positive effects?

Of course we all know the answer to the question. All these things came to pass because politicians don’t actually represent the will of the people. Politicians represent our desire to avoid short term pain and their own personal desire to get re-elected.

So how did we get in the mess we are in?

Let’s start off with a little history. Let me say that nothing is happening today that hasn’t happened many times in the past. I’m fairly certain human nature hasn’t changed in the last 5000 years or so, and I really doubt it’s going to materially change in the next 5000 either, so I can virtually guarantee we will go through this again…and again, and again.

Historically about every 70-80 years humanity suffers through an economic depression. It takes about that long for society to forget the ravages of the last depression and. And what causes it is a credit bubble.

I know we would like to blame our troubles on the greedy bankers and leave it at that. But that is way too simple. Bankers are just human, no different than anyone else. Trust me, no one is immune to the pull of greed. Sure the financial system should have foreseen that no good could possibly come from loaning half a million dollars to someone with a $30,000 a year job. And what about the speculator that bought that half million dollar house. He knew darn well when he took out the loan he couldn’t afford to make any payments once the teaser rates expired. Isn’t it also his fault when he lied about his income? Or how about the loan originator? Was it really in everyone’s best interest to underwrite a loan for several hundred thousand dollars to a guy sitting on the other side of the table wearing a McDonald’s work uniform? Or was it just the quickest way to make a commission? And what the heck, everyone else was doing it. If they didn’t make the loans they were just going to put themselves out of business while all their competitors were getting rich.

The same could be said for the appraisers. They certainly knew the prices they were quoting had no basis in reality, but then if they tried to act responsibly they would quickly find themselves out of a job.

How about the home owner who annually or biannually refinanced their house so they could take equity out and buy a new Hummer, home theater system, or a swell vacation, etc. Aren’t they also just as much to blame as the bankers?

We’ve coined the term Banksters as a sign of the contempt we feel towards the perceived instigators and originators of our current malaise, but perhaps we need another term, one that is a bit harder to stomach but just as appropriate. Sure, the Banksters were a big part of what went wrong but no more so than the average Americanster. All those folks living on home equity, all those buying houses, sometimes several at a time to flip, all those people lying about their income, were they not also driven by greed? Weren’t they just as much at fault for the mess we are in as any banker?

Next I want to point out that none of this would have been possible without the co-operation of our elected officials and especially the Federal Reserve. After all it was Alan Greenspan and now Ben Bernanke who cut rates to near zero and supplied the free money that was required to get the ball rolling down the hill. No bubble was possible without the consent of the Fed, the very people who are supposed to be looking out for this very thing.

Of course Greenspan has insisted it isn’t possible to spot a bubble before it pops. What a load of baloney. Anyone with half a brain could spot not only the tech bubble but also the housing bubble a mile away.

Do we really want to trust these folks with regulating the system? Let’s face it, their track record leaves a lot to be desired. Why should we think they will get it right this time when so far they are batting zero?

There are right and wrong ways to deal with this kind of problem though. History has shown over and over that the quickest and cleanest solution is to let the market work. Let the system collapse and cleanse. Sure it means hard times. There really is no avoiding that. The countries that have allowed the market to function have suffered 2 or 3 years of extreme pain. Regretable, but unavoidable.

However, every country that buckled down and accepted the cleansing process emerged from the other side much stronger. Brazil in the early 80’s, Vietnam in the mid 80’s and Russia in the late 90’s are just a few examples. And without exception these countries all saw explosive growth after allowing the cleansing process to run its course.

On the other hand the countries that fought the market without exception entered long periods of hard times. In the 1930’s Roosevelt took this path and turned what should have been just a bad recession into the Great Depression. Ultimately all the efforts to halt the depression only made it worse, culminating in World War II.

Japan chose this path and was rewarded with 20 years of on again, off again recessions, culminating in finally bankrupting their country.

Now we are faced with the same problems as Japan in the 1990’s and Roosevelt in the 1930’s and what path have we chosen? The path of least resistance, of course. We’ve decided to kick the can down the road.

We are certainly in good company as almost every major empire in the history of the world has chosen this path to oblivion. And it always starts with currency debasement.

Take a good look at the following chart. 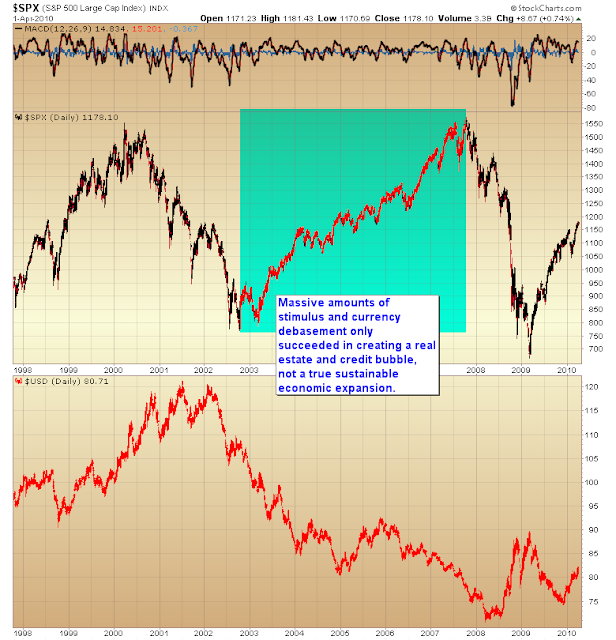 You can clearly see when it began. As the US started to decline the powers that be took the easy way out and started printing. We managed to borrow and print our way to one hell of a party in the middle of the last decade.

Unfortunately, that party was built on a fantasy of credit expansion and real estate speculation. We certainly created a lot of jobs during this period. Jobs in finance, construction and anything related to the housing industry. As a matter of fact, almost all aspects of the economy exploded as it appeared we had true demand for everything from $5.00 for a cup of coffee at Starbuck’s to strip malls on every available corner.

Unfortunately, and like all great parties, there is a price to pay…the hangover!

Our fantasy economy built on a foundation of debt and currency debasement couldn’t continue indefinitely and it didn’t. What followed was the second worst bear market in history and the single worst economic collapse since the Great depression.

Yet amazingly enough, our leaders have learned nothing from this experience.

They are now back at it again printing oceans of money and racking up trillions and trillions of dollars of new debt. This is the exact same recipe that led to the last catastrophe. This is the same government whose leader stood in front of the American population and told us with a straight face that we needed to spend our way out of the recession. Seriously?

Too much consumption and too much debt is what got us into our current mess in the first place. How does it help us to get more bankrupt because let’s face it, the USA is bankrupt.

It’s simply not possible to borrow trillions and trillions of dollars and spend our way out of bankruptcy. The old adage that you never get something for nothing has been conveniently overlooked. I don’t think the laws of economics are going to be magically revoked for a country anymore than they will for an individual. Just ask Greece!

So where is all this leading us?

We are just going to go deeper and deeper into debt. Taxes will continue to rise (by the way does anyone realize how many hidden taxes are buried in the new health care bill)? And inflation (a hidden tax that none of us have any say in) will continue to worsen.

Ultimately none of these ill fated policies will achieve any of their goals. And when these policies fail politicians will do what they always do. They will look for some way to divert public attention away from their inability to solve any of society’s problems.

That invariably means they will look for someone to blame. That almost always leads to wars.

If left to their own decisions our leaders are never going to choose the hard path. It’s human nature to avoid short term pain, to push the problem down the road for someone else to deal with even though that choice only leads to a much bigger problem in the long run.

Folks we have mid-term elections coming this year and we have an opportunity to get our message across. If you want a brighter future for your children, if you want politicians to represent their constituents instead of special interests, if you want to put an end to the pork in every bill that’s used to “buy” votes, if you want to stop the bailouts, if you want to send a message that you aren’t happy with the government wasting our tax dollars on stimulus that only benefits a few while it costs the rest of us in higher taxes and higher inflation, if you want to let the congress know you’re mad as hell about the 50% increase in health care that their ridiculous new bill immediately cost each and every one of us (and that’s not even including all the hidden taxes) there is a way.

Simply vote out every single incumbent. If left up to politicians they will never put a limit on terms. They will never end the pork. Big money will continue to “buy” elections. Limiting terms certainly won’t cure all of the problems but if politicians knew going in that they would only be allowed one term they might be more likely to do the right thing.

For one thing, there would be no need to waste money trying to get re-elected. It would never happen. It’s time to take back control of our political system. It’s time we let the politicians know we’ve had enough of the waste and corruption. It’s time we were actually represented by our representatives.

It’s time to just say no!