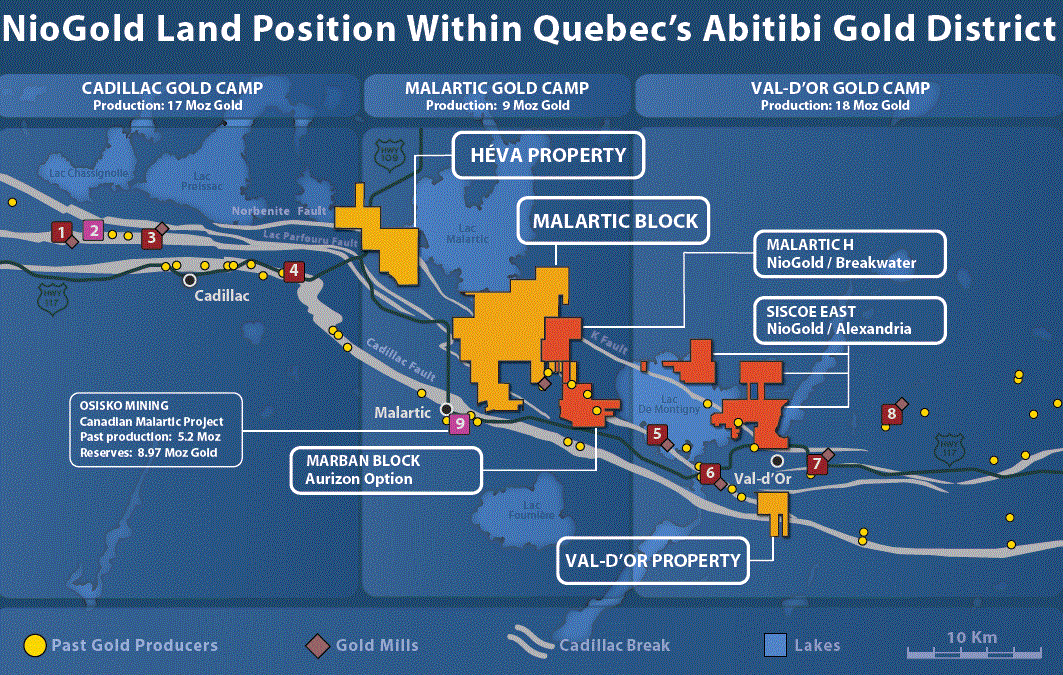 The adjoining Cadillac-Malartic-Val-d’Or gold camps have produced 45M oz gold with more than 50 previous producing mines and 7 currently operating mines.
NioGold is an extremely compelling gold play, management has a well thought out plan for success and they are operating in the heart of one of the most prolific gold producing areas in the world – 170 million ounces of gold have been pulled out of the Abitibi gold belt.
NioGold has consolidated a large 120 km2 land package in the heart of the Cadillac, Malartic and Val-d’Or gold mining camps. The Cadillac, Marlartic and Val-D’or gold camp projects have area mine production of 45 million ounces of gold.

The projects are located close to the full-service mining towns of Val-d’Or and Malartic. There is easy access to gold milling facilities, a provincial highway, railroad, power lines, telecommunication systems and an experienced labor force. Having all the necessary infrastructure and a trained skilled workforce nearby facilitates cost effective exploration and development.

Aurizon can then earn an additional 10% interest by completing a feasibility study and a further 5% – for a total of 65% – by arranging financing to bring the project into production.

NioGold will be the operator during the initial earn-in period but Aurizon will become the operator after it earns its 50 percent of the project. The work program at Marban will be prioritized towards increasing the resources that can potentially be mined by open pit.

Michael Gustin, of Mine Development Associates in Reno, Nev., in December 2009, prepared a resource estimate on the Marban Block for NioGold. The report outlined indicated resources of 598,000 oz. gold and inferred resources of 361,000 oz. gold.

Most major deposits on this belt have been mined to plus 1,000 meters. Niogold’s were mined at much shallower depths (maximum 500 meters) so the company believes there is a lot of blue sky potential on their properties for resource estimates to increase as drilling penetrates below the 500 meter level.

Rock Lefrançois is a professional geologist that brings strong technical and management skills to the Company. Mr. Lefrançois has over 20 years of experience in the search and valuation of various types of precious and base metal deposits across the North and Central American Cordilleras and the Abitibi Greenstone Belt. During his career he has served as senior geologist for mid-tier mining companies, notably Cambior and Aur Resources. His local knowledge of the Val d’Or and Malartic mining camps was an asset in acquiring key ground to build NioGold’s land package in the area.

Mr. Marrandino brings 20 years experience in fund raising and management consulting to NioGold’s Board of Directors. His diverse knowledge, experience and contacts in the oil & gas, mining and hi-tech private and public sectors of these industries have assisted many companies in reaching their potential and desired mandates.

Toby Lim is called to the British Columbia Bar and has been an associate lawyer practicing securities and corporate law at Anfield Sujir Kennedy and Durno, a Vancouver based law firm, since 1998. He has worked with numerous public and private companies in relation to initial listings, financings, acquisitions, mergers, re-organizations and spin-off transactions, and has served as a director or officer of a number of public companies. He received his Bachelor of Laws degree from Osgoode Hall Law School in Ontario in 1996, and a Bachelor of Commerce with honours from the University of British Columbia in 1992.
Simon Ridgeway, Director

Mr. Ridgway is an accomplished mine developer with over 30 years experience in the mining industry.  During the 1990s, Mr. Ridgway led the discovery and development of two gold deposits in Honduras and Guatemala, both of which were subsequently sold and put into production by Glamis Gold, now Goldcorp.

He is a co-founder of the Gold Group, a stable of mining and exploration companies having a head office in Vancouver, Canada.  The companies under his management include a full spectrum from grassroots exploration (Radius Gold Inc.), through advanced-stage definition drilling (Focus Ventures Ltd.) to production and cash flow (Fortuna Silver Mines Inc.). Since 2003, his group has raised over $300-million in the European and North American capital markets.  Most recently, Fortuna Silver Mines closed a $35-million bought-deal to finance the development of a new silver mine in Oaxaca, Mexico.

Conclusion
NioGold has consolidated a large land package in the heart of an established gold mining district (their landholdings are located along Highway 117, a stretch of road called the Golden Highway because it links a large number of current and historic gold mines, gold development projects and gold milling facilities) and has attracted the attention of a deep pocketed partner committed to building shareholder value, for both companies, through the drill bit.
Currently there are two drill turning on the Marban Block Joint Venture (JV) property, a third is scheduled to start very early in the new year. The two drills have been working since September 1st and are each drilling roughly 90 meters a day. The average hole depth is 300 meters and the first core went to the lab to assayed at the end of September.
NioGold has several very distinct advantages:

There is a very large drill program, 50,000 – 60,000 meters, presently underway. I expect results to start flowing very soon and then continue for the foreseeable future.
NioGold and its Marban Block JV should be on every investors radar screen.
Is it on yours?
Richard (Rick) Mills
rick@aheadoftheherd.com
www.aheadoftheherd.com
If you’re interested in learning more about the junior resource market please come and visit us at www.aheadoftheherd.com.

Membership is free, no credit card or personal information is asked for.

This document is not and should not be construed as an offer to sell or the solicitation of an offer to purchase or subscribe for any investment. Richard Mills has based this document on information obtained from sources he believes to be reliable but which has not been independently verified; Richard Mills makes no guarantee, representation or warranty and accepts no responsibility or liability as to its accuracy or completeness. Expressions of opinion are those of Richard Mills only and are subject to change without notice. Richard Mills assumes no warranty, liability or guarantee for the current relevance, correctness or completeness of any information provided within this Report and will not be held liable for the consequence of reliance upon any opinion or statement contained herein or any omission. Furthermore, I, Richard Mills, assume no liability for any direct or indirect loss or damage or, in particular, for lost profit, which you may incur as a result of the use and existence of the information provided within this Report.

Richard Mills does not own shares of NioGold Mining Corp.

NioGold Mining Corp. TSX.V – NOX is an advertiser on his website aheadoftheherd.com.

So Much For Gold! Chinese Stock Market to Outperform!