Posted From: Short Side of Long Blog
Market Notes 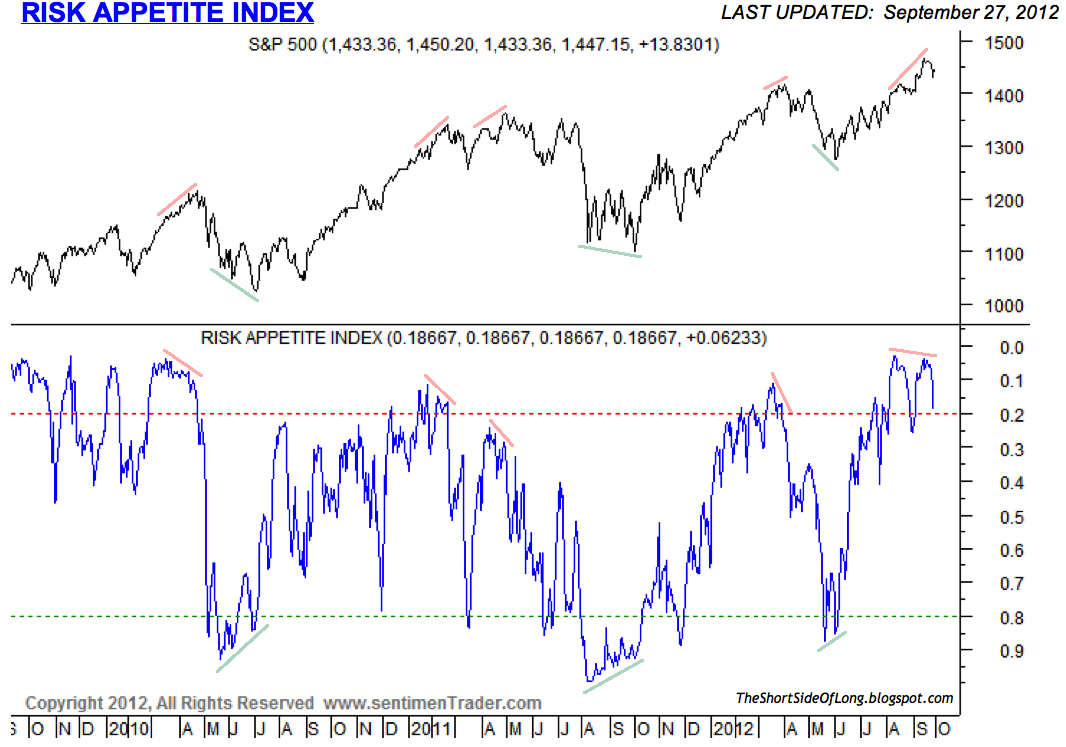 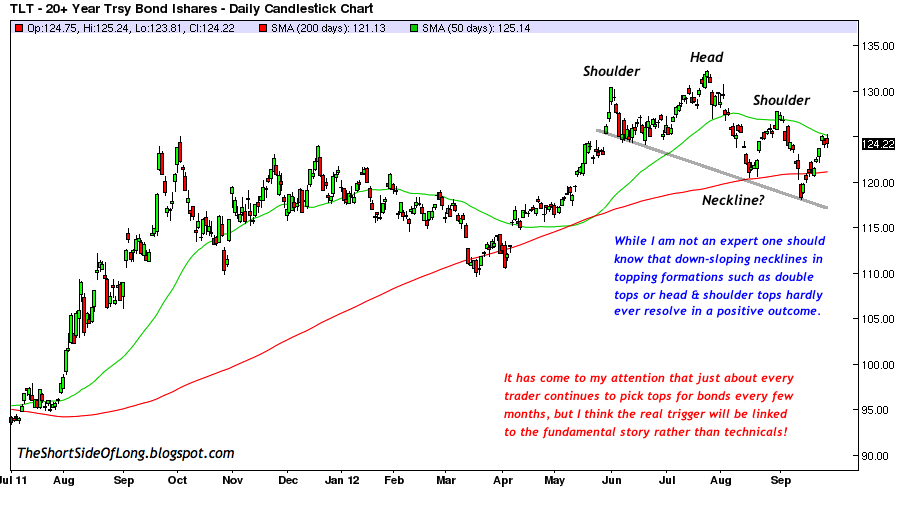 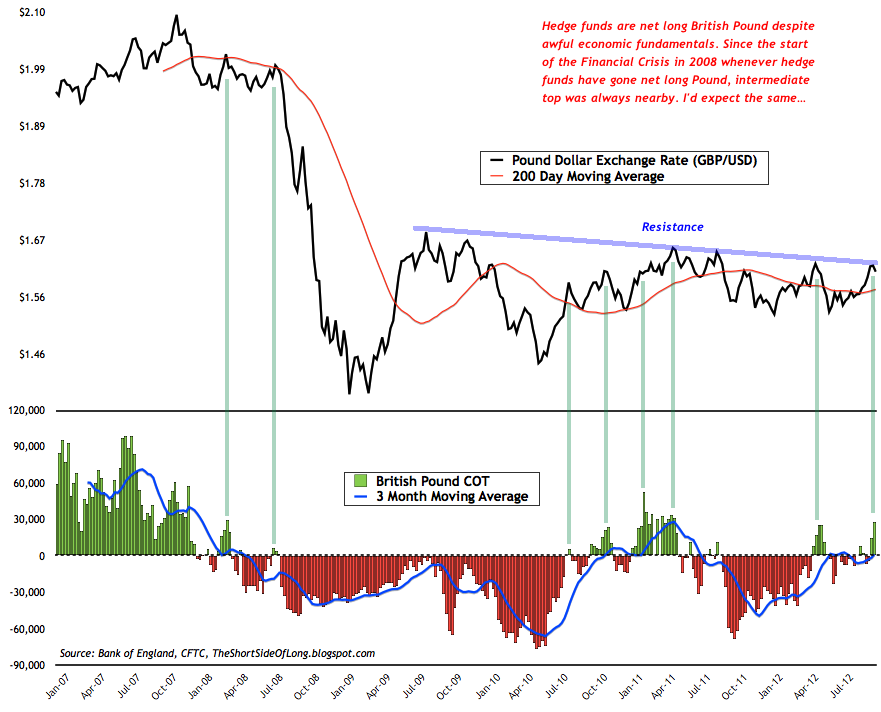 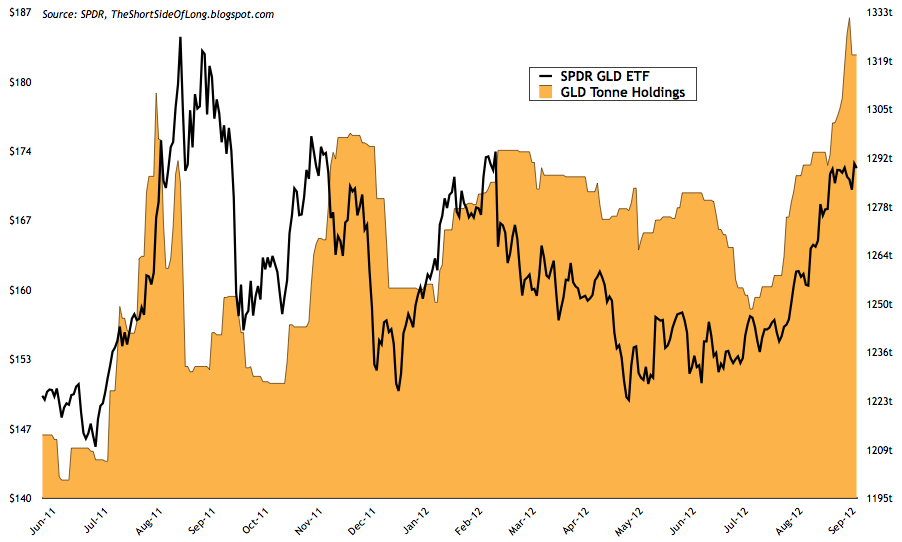 In recent weeks Short Side Of Long blog has argued that we are slowly but surely entering a global slowdown and moving towards a synchronised recession. You can read previous articles on these themes by clicking on the following clicks:
While I am not the only voice on this matter, when one watches financial media TV stations or reads the majority of independent blogs, the common impression one gets is that all is fine, because centrals banks and governments will support the recovery. Sometimes I feel like I am watching and reading opinions closer to Alice in Wonderland. There is a difference between hope and actual facts. As we always do, let us start of with the “economic facts” from the United States and move around the globe from Europe to Asia. 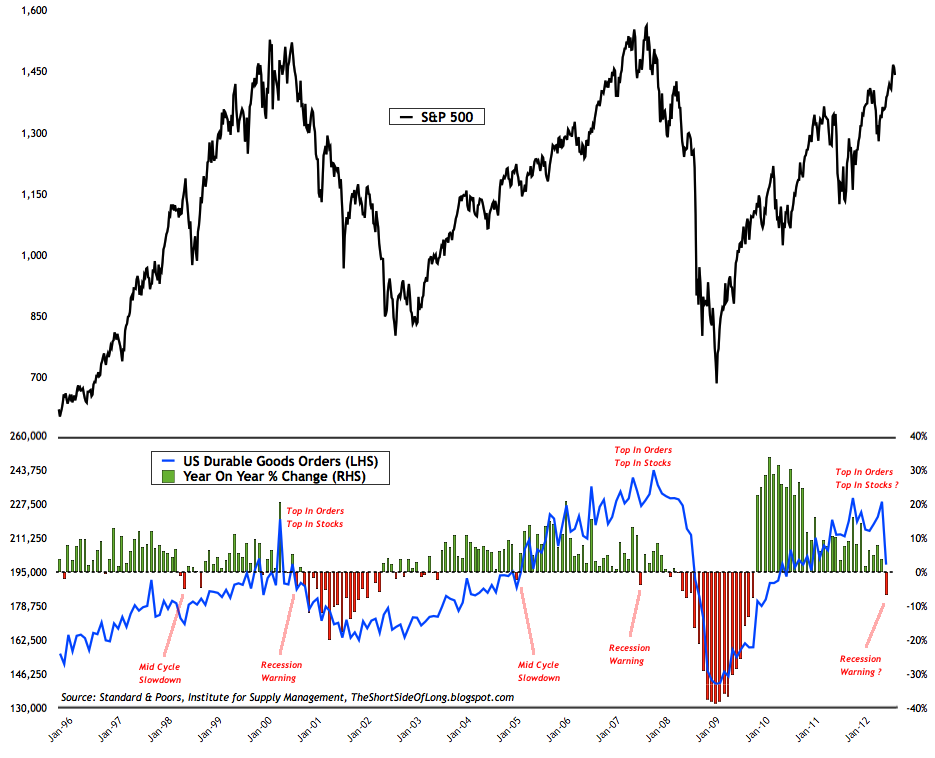 Let us consider the fact that this week’s Manufacturing Durable Goods Orders collapsed, as we recorded a first year on year negative reading since the 2008/09 recession. You might remember it was only a few weeks ago that I was warning of further manufacturing weakness ahead and my view now is that we are seeing recession signals. Economist website, Markit summarises the report:

Orders for long-lasting goods fell sharply in August in the US, according to official data. Orders fell 13.2% on the previous month, a near record fall and the largest seen since the record 14.3% decline in January 2009. Orders, excluding volatile transportation goods, were down 3.3% in the three months to August compared to the prior three months, and with its forward-looking properties, suggest an ongoing deterioration in the manufacturing output trend.

These orders data suggest that manufacturing looks set for the worst quarter for three years in the third quarter, possibly stagnating, which is similar to the downbeat message from business surveys such as the PMI. 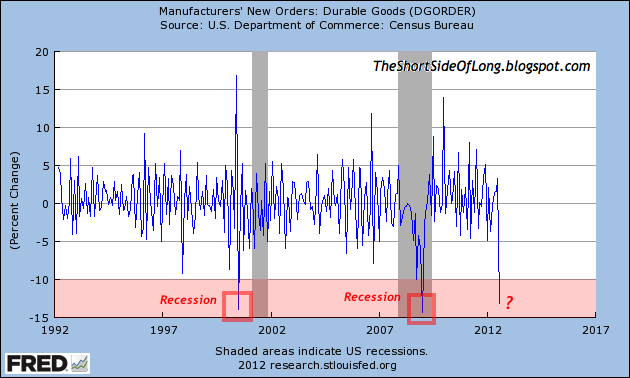 One interesting point from the Markit summary was the fact that we saw “a near record fall and the largest seen since the record 14.3% decline in January 2009.” The chart above shows that during the current secular bear market and global de-leverging period, whenever Manufacturing Durable Goods Orders fell by more than 10%, the economy has either been in, or was about to enter a recession. 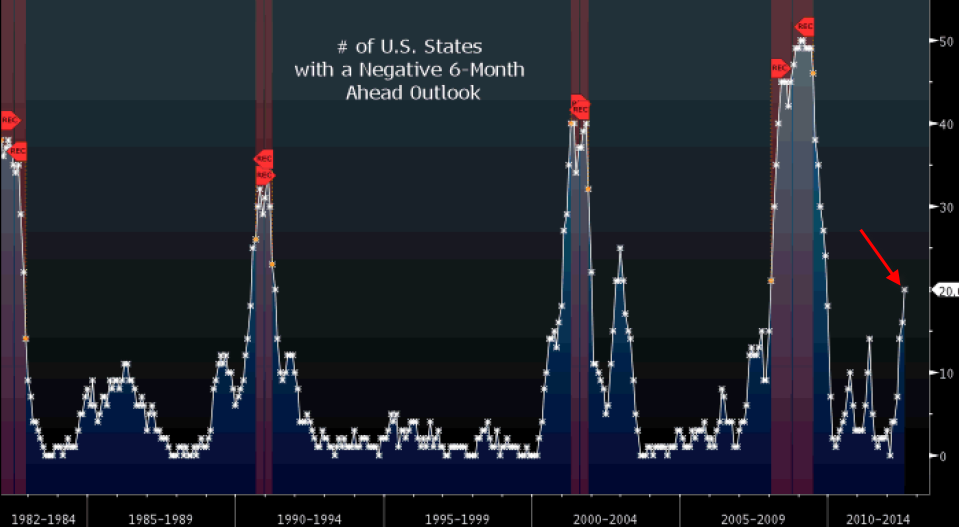 According to the Philly Fed Coincident State indicator, there are more and more US States slipping into a contraction and experiencing a slowdown. Looking at the chart above, the “breadth” of the US economy is narrowing, just like the breadth of the stock market is narrowing too. I hardly doubt that we can turn back into positive growth, when we have close to half of the US experiencing a slowdown already. In my opinion, it is only a matter of time until this reading increases and US officially enters a recession.

There has been an abundance of bulls pointing to strong Weekly Jobless Claims, decent Non Farm Payrolls data and a recovery in Housing. However, these bulls obviously do not understand how a business cycle works and it is a slump in Goods Orders that builds Inventory and eventually forces companies to pull back on Investment and increase Lay Offs. In other words, manufacturing leads employment and employment eventually creates confidence in Housing, not the other way around. At the same time, other bulls point to positive GDP as a sign that the economy is still growing. While not surprising to me, the US GDP figures were revised down to a complete stall speed of 1.25% this week. Let us remember that GDP is a lagging indicator, so we might already be close to a first quarterly contraction in Q3. 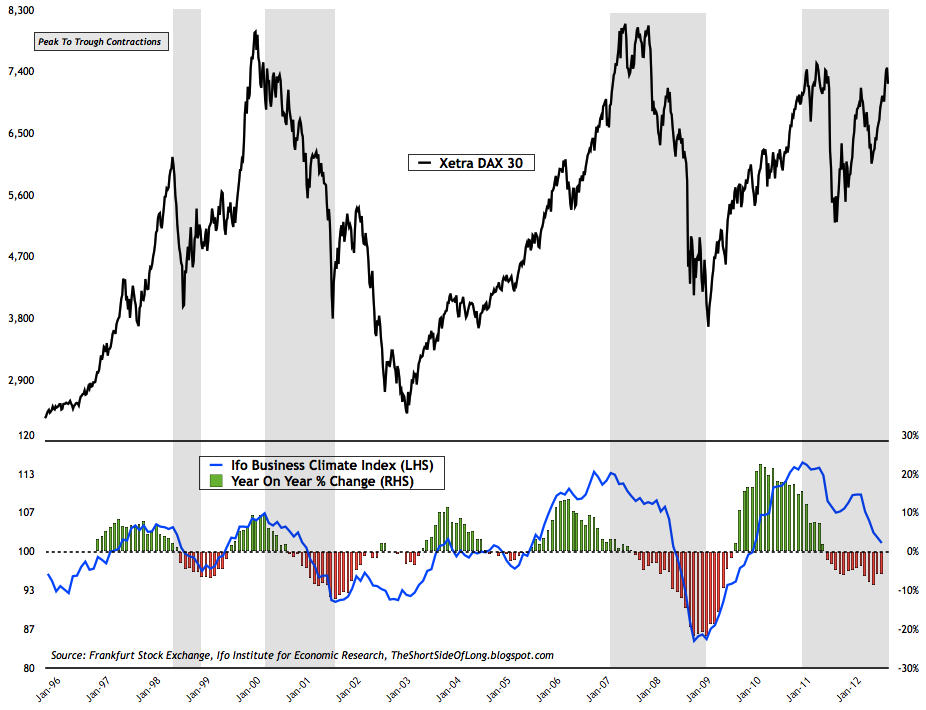 Moving across the Atlantic Ocean and towards the European manufacturing powerhouse of Germany, we found out this week that ifo Business Climate Index (a survey of more than 7,000 German CEOs) slumped yet again. German CEOs think we are now firmly in the down swing of the business cycle, as the recession risks remain decent. However, these CEOs might be a little too optimistic because there are signs that Germany might already be in a  recession. Expectation component of the ifo Index, a forward looking measure, shows that three months from now German GDP could be contracting. 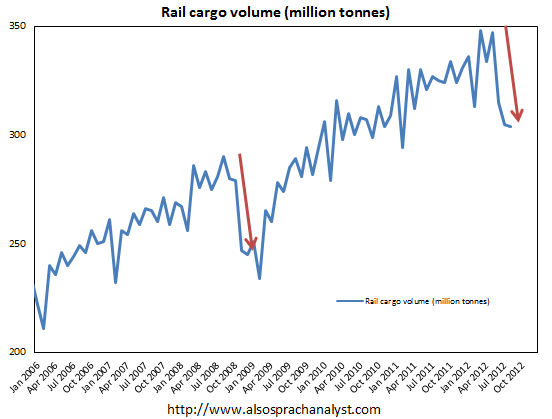 In China, not much to report this week, as I have already discussed the fact that manufacturing remains weak and that the economy continues to slow, without any signs of stabilising for the time being. The chart above tracking Chinese Rail Cargo Volume, which tends to be one of the better leading indicators, also continues to signal that the current slowdown is as bad as 2008/09. However, there are some analysts who think that the Chinese slowdown this time around will be even worse, for the sheer fact that all the hot money is now leaving China for the first time since late 90s.

Sticking with Asia and moving across the East China Sea, I’ve also warned that Japan was on the verge of another slowdown the last time the OECD indicators were updated. According to recent economic data, Japan is now at the risk of a recession as Industrial Production sunk yet again in August, down over 4% year on year. This is now the fourth monthly decrease in the past five months, as the chart above shows and does not bode well for Japanese manufacturers. 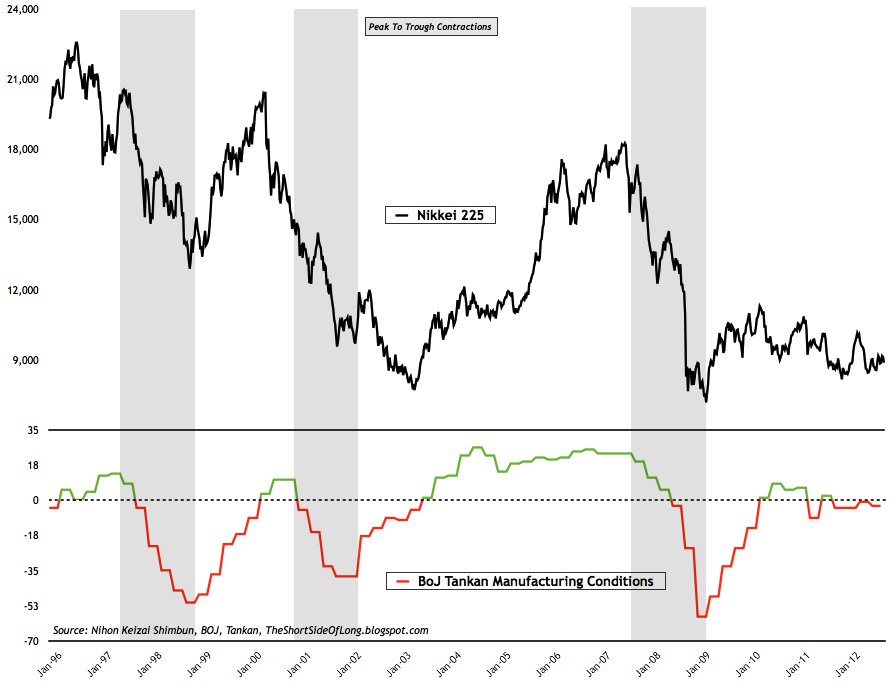 This mornings data out of Japan confirmed that, as Tankan Manufacturing Conditions fell slightly in the third quarter of 2012. Bloomberg writes:

“Big Japanese manufacturers became more pessimistic as slowdowns in China and Europe sapped export demand and pushed the nation closer to an economic contraction. The quarterly Tankan index for large manufacturers fell in September to minus 3 from minus 1, the fourth negative reading, the Bank of Japan said today in Tokyo. 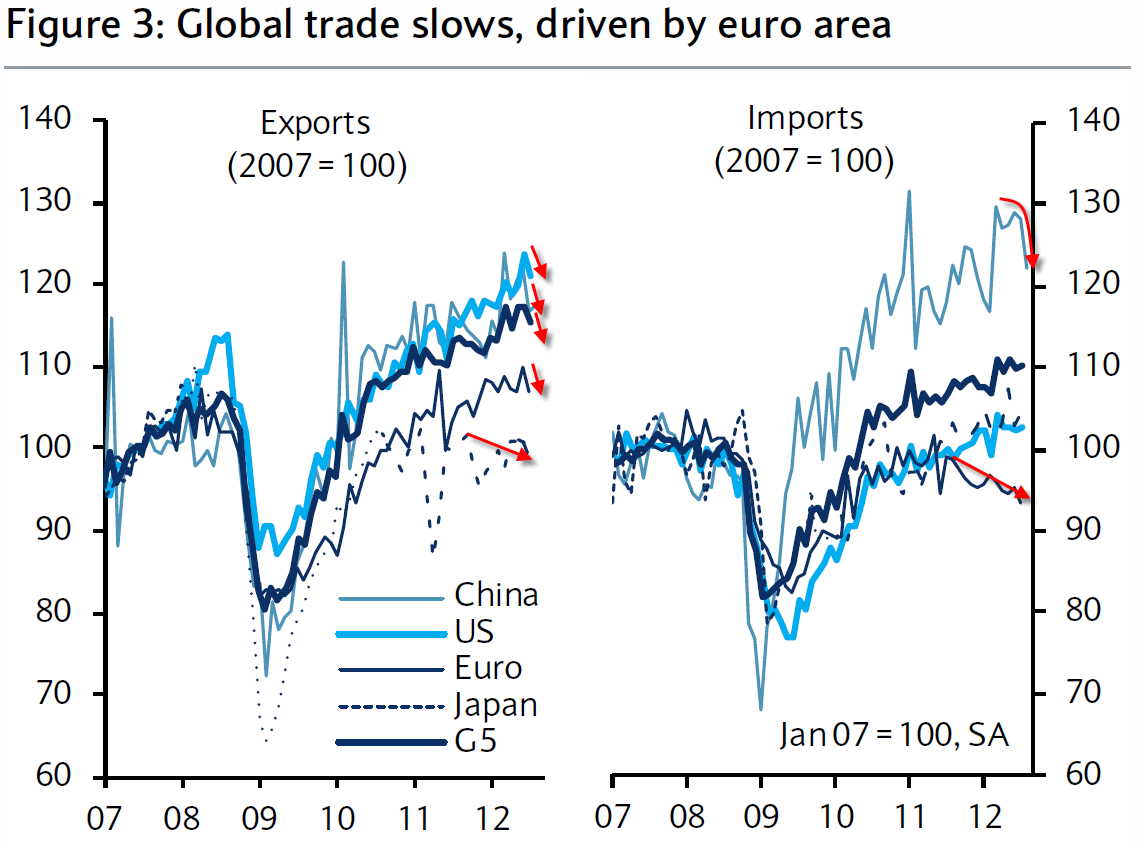 And with exports affecting the Japanese economy, I would like to turn to global trade, which Morgan Stanley recently pointed out was in contraction mode from a year before. Breaking down the data, we can see that global exports are falling in all major regions including US, Europe, China and Japan. At the same time, import demand coming out of Eurozone and China has been weakening significantly. Obviously, this goes hand in hand with global exports as the overall cycle becomes self-enforcing. Furthermore, trade volumes link closely to global industrial production and the current data continues to signal weak demand and rising inventories (a recessionary condition). 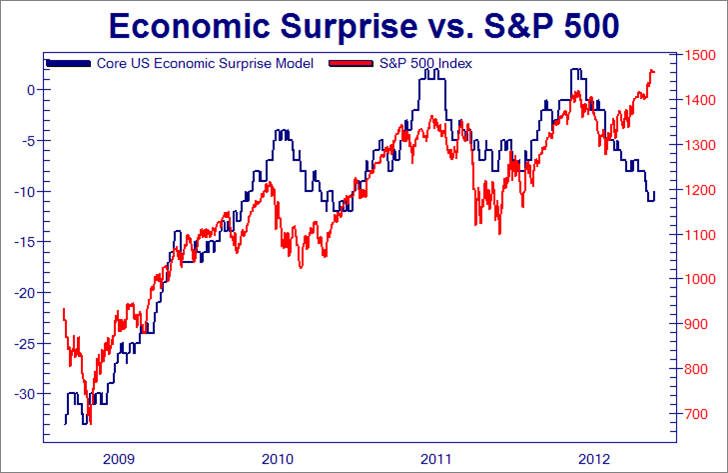 The longer term investors amongst us would have noticed in recent times that the equity market has completely disconnected to the fundamentals discussed above, perfectly shown in the last chart. Global central bank stimulus measures have pushed risk asset prices higher for the time being, but the question is how long can this stimulus driven rally last?
While nobody can really give a precise answer, these disconnects usually recouple eventually and majority of the time it is the equity market playing catch up (rather quickly) to underlying economic conditions. Furthermore, the fact that the herd is very comfortable and complacent right now, while fundamentals continue to deteriorate at the end of the business cycle, is probably a major indicator that growth and corporate profits will disappoint significantly during the period ahead.
Trading Diary (Last update 05th of September 12) Systemic Stress is Building, and it’s Bullish (for now)