I’ve written about we saw yesterday already, but it’s importance demands a repeat.

Headline hype, largely fear-inducing, will attempt to convince as many people as possible that this technical setup does not exist.

Even slow-and-steady gold has penetrated the upper channel of its linear trend established in 2001. As Jim suggests, the subtle technical signals illustrate the onset of a phase 3 trend acceleration. 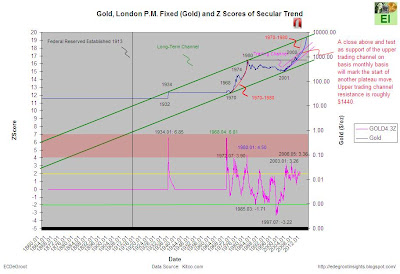 Look for the downward push in gold and silver to be supported as much as possible by fear analysis while money flow repositions for the inevitable QE(n) program to be implied or announced soon. 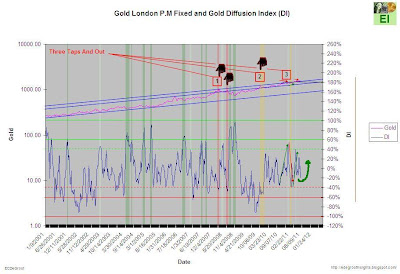 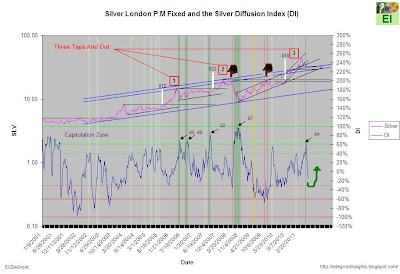 The equity bears growling loudly after yesterday’s sharp decline. Though, let’s not forget that the equity markets were hammered hard by doubt and fear in the summer of 2010 until the announcement of QE2 in August at Jackson Hole. Anything is possible in the equity markets, but be certain as an increasing number traders, investors, and most important of all citizens crying out “save me”, liquidity remains one of the few policy options left that will buoy asset prices and consumption it supports. Maintaining spending in a consumption driven economy is an economic and political priority.

“This is like deja vu all over again.”, Yogi Berra 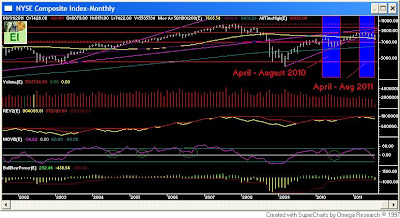 Stocks plunged sharply Thursday, with the Dow down more than 500 points, in its worst one-day drop since December 2008.

All three major averages tumbled into negative territory for the year as investors were rattled over an intensifying global economic slowdown and ahead of the widely-followed monthly unemployment report.

Headline: QE3 Might Help the Markets, but It Won’t Save the Economy: Lance Roberts

Stocks endured a free-fall Thursday, and the major indexes in the U.S. plummeted. The Dow Jones Industrial Average fell nearly 513 points, or 4.3%, and the Nasdaq lost almost 137 points, or 5.1%.

Market psychology has deteriorated thanks to the debt ceiling debate. Plus, fundamentals are also looking ugly. Last week’s shocking GDP data and this week’s soft manufacturing data and worse-than-expected consumer spending numbers being the most glaring examples.

All the negativity has led to renewed talk of another round of quantitative easing — the Federal Reserve’s stimulus program to spur growth by buying up government bonds.

Lance Roberts, CEO and chief strategist of Streettalk Advisors, says there is nothing more certain than QE3 and the potential for another recession. “The trend of the data is all negative, so barring any quantitative easing program from the Fed, we will probably be in a recession by the end of the year.”

Roberts is of the mind that the Fed will step in to help stave off another recession, but the potential for it to work after QE1 and QE2 is not great due to the law of diminishing returns.

Nearly 15% of the U.S. population relied on food stamps in May, according to the United States Department of Agriculture.

The number of Americans using the government’s Supplemental Nutrition Assistance Program (SNAP) — more commonly referred to as food stamps — shot to an all-time high of 45.8 million in May, the USDA reported. That’s up 12% from a year ago, and 34% higher than two years ago.

The program provides monthly benefits to low-income individuals and families, which they can use at stores that accept SNAP benefits.

Correlation between India and Gold