Most Gold bulls are silver bulls. The 1970s is the reason why and because inflation that occurs when a secular commodity bull cycle is in effect tends to flow into both precious metals. I have been less than wildly bullish on silver lately.

I own some physical silver but hold much more Gold. My concern is simple. In past deflationary cycles, Gold has done well but silver not as well. Since I favor deflation over inflation for this cycle, I heavily weighted myself towards Gold and only hold a little silver. I even made the stupid mistake of shorting silver a few months ago and had my a$$ handed to me.

Silver made a big move today and a short-term break out. Silver can make explosive moves up and down and with a push slightly higher, silver will have a confirmed breakout that targets new highs for the decade. Unlike Gold, silver is still a ways from its all-time nominal high around $50 during the last silver bull market in the 1970s. If silver makes new highs in the next few months, the deflation scenario won’t be looking so good.

Though I have believed deflationary forces were too powerful to be overcome by government intervention, global capital flows and/or an insane level of intentional wasting of money may prove to be too much. If silver breaks out to new highs for the decade, the deflation argument is going to look mighty thin. I remain hedged with Gold, as an inflationary holocaust means that Gold will peak in the $5,000-$20,000/oz range instead of the $2,000-$3,000 range. Either way, Gold holders will win over general stock holders. However, in a heavy inflationary environment, I believe silver has greater upside potential than Gold. Needless to say, I am going to hang on to my remaining physical silver until I see how this one plays out.

Here’s a daily chart of the silver ETF (ticker: SLV). This ETF doesn’t hold the silver it claims to and is believed fraudulent, but is being used for charting purposes because it can show volume. Silver bulls are advised to hold physical bullion as their core holding. I am not saying this ETF can’t be used for short-term trading, but paper is paper and metal in your possession is metal in your possession. Anyhoo, here’s a one year daily candlestick chart of SLV: 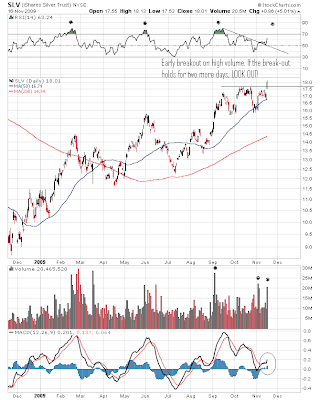 Here is a long-term weekly chart of silver ($SILVER): 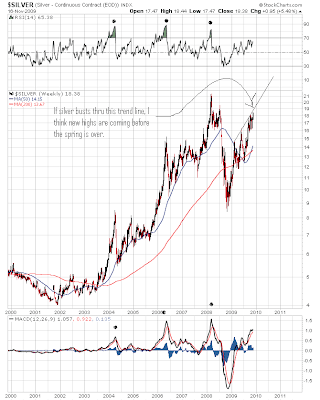 Mr./Ms. Market is always right and those of us trying to keep up with him/her have to be flexible. I am learning not to fight the tape and instead embrace it. If my deflationary stance proves wrong and the government bond market is no longer relevant, so be it. As a Gold holder, it doesn’t matter to me – heads I win, tails I win more. Silver is on the verge of sending out a powerful warning to the deflationists to reconsider. If it occurs, I’ll be among the first skeptics to give it props and respect the move. If it doesn’t, I promise not to act like I saw it coming all along, as today’s move in silver was not what I expected.

You’re not going to hear inflexible Prechter-like deflationary dogma from me if silver breaks out to new highs for the decade. The Dow to Gold ratio is my secular compass, not the inflation-deflation debate. We should know within a few days whether or not this move in silver is the real deal. Perhaps I’ll have to start digging into, researching and expanding my junior silver miner stock list sooner than I thought…

Good Time to Invest in Silver

My Interview with Kevin Depew