The bullish set up in silver (and gold) has turned insanely bullish. An astonishing amount of silver has been removed from the Comex warehouses over the past two weeks. Most of it from Scotia – who has unrefutedly been accused by many, including me, of operating a “fractional” bullion custodian operation – and from HSBC – who has by far the 2nd largest paper short position in silver, on the Comex and via OTC derivatives as per the latest Comptroller of the Currency’s Q1/2010 Report on Bank Trading and Derivatives Activities.

Every day last week silver (and gold) traded up in the physical buying markets of Asia and India, only to undergo massive paper selling in London and on the Comex. What was incredibly bullish was the way silver recovered from repeated paper price attacks during the paper-only Comex trading sessions every day last week. I can’t recall seeing price “snap-back” action like this in nearly nine years of trading silver. Silver closed the week slightly lower than a week ago, but closed nearly a dollar above it’s intra-day trading low last week. This is an even more remarkable feat considering that the Dow and the SPX were demolished for the week.

The trading action I observed and participated in, combined with the amount of silver leaving the Comex, tells me that the paper shorts are having a hard time triggering any meaningful stop-loss selling, which is how the big Comex shorts (JPM, HSBC) have historically covered their short positions.  Here is Ted Butler’s comments from his weekly King News World radio interview:

There’s not a lot of people out there looking to dump physical metal right now…and I can see situation developing where a lot people wake up and say they want to acquire big physical positions and that mismatch of no big physical supply and potential physical demand is what the doctor ordered for a big price explosion.

Here’s the link to the entire interview – it’s about 10 minutes and worth hearing:  Ted Butler on silver

I can’t really add much to my commentary above, but they say (whoever the hell “they” is – who is John Galt?) a picture says a 1000 words: 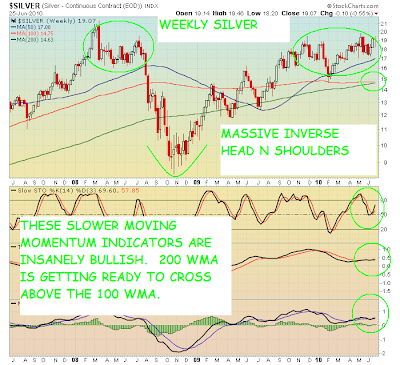 About all that’s left to be said about the situation in silver is this:
Source: http://truthingold.blogspot.com/
Previous