I wrote an article on July 5th, 2010 as Taseko was collapsing after a Federal Review Panel concluded that Prosperity would have significant adverse affects on the environment. As the stock was plummeting from the news I wrote to readers that Taseko was reaching a major buy point and an area of support.  Since that article Taseko has rallied more than 75%.

An important point that sellers did not understand in July was that Federal Review Panel did not weigh the economic affects at all.  Their duty was only to make environmental recommendations in case the project was approved.  The British Columbia Approval was based on the fact that Prosperity is crucial to the future economic growth of the Province and that those positive outcomes far outweigh the environmental impacts.
In the article I noted that the mining industry brings in over 8 billion dollars to British Columbia a year and Prosperity is a crucial  decision which the entire mining is carefully observing.  Prosperity is an essential project for the Province as it will bring in more than 400 million dollars a year in revenue.  It will create a lot of jobs and boost not only jobs for miners but in all the mining related industries.  A new mine has a domino effect for the economy as it is the foundation for local industry in British Columbia.

Last Friday Premier Gordon Campbell made an important plea to the Prime Minister in highly publicized speach to approve the mine.  This gave a huge signal to the mining investment community that this decision from the Prime Minister will have powerful ramifications.

The ramifications of the Federal Government overturning a Provincial decision would spur a lot of tension in an area which has been hit hard from a weak economy due to the downturn in forestry.

Investors are now seeing the broad based support especially local political support that Taseko is receiving and the importance of this mine to be constructed from very powerful people in the Province.

This has sent Taseko’s shares soaring to new highs as investors price in a go ahead from the Prime Minister. 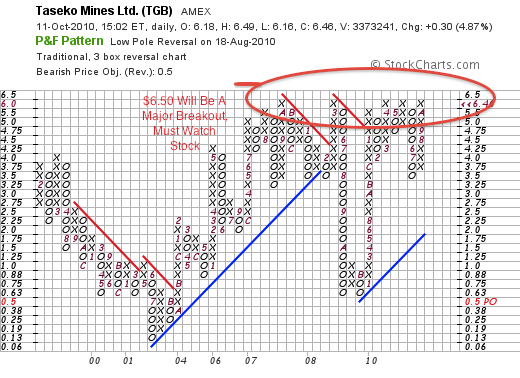 Since my original recommendation on Taseko from May of 2009 Taseko shares have soared more than 333%. If you are interested in new recommendations and how to trade mining stocks using technicals and fundamentals please sign up for my newsletter at http://goldstocktrades.com.