In our last editorial we pointed out how the gold stocks had veered off the recovery course. They fell well below the recovery template and fell below their 50-day moving averages. Furthermore, the positive “non-taper” news turned out to be the mother of all bull traps for traders. The market soared on presumably an epic amount of short covering. Yet that only served to be a selling opportunity for traders. That sequence of events only strengthened our view that the sector continues to be headed for a retest which could serve as the mother of all buying opportunities. 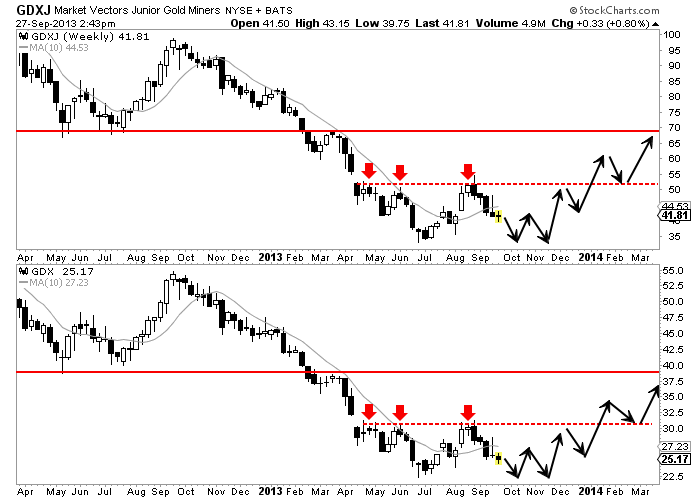 The weekly charts for Gold and Silver show a similar picture. Gold rallied nearly $220 on a daily closing basis. However, it failed at $1400 which is now clear resistance. Similarly, Silver rallied from $18 to nearly $25. There is quite a bit of resistance at $24. We think its unlikely Gold and Silver break past $1400 and $25 anytime soon. We’d first anticipate a retest of the summer lows or at best weeks and weeks of back and forth of action. 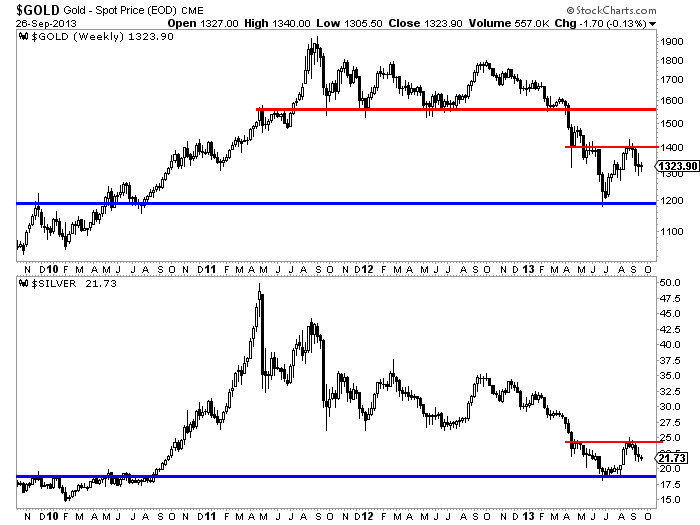 The good news for precious metals bulls is this market remains in a bottoming process which should produce a turning point that is on par with those seen in 2000 and 2008. The bad news is we are already five months into this bottoming process and it can continue for several more months. We don’t see widespread news in the sector but it is possible that GDX makes a new low but not GDXJ. It’s possible Gold makes a new low but not Silver. Major divergences are common at major bottoms.

The gold and silver stocks have been in a two and a half year bear market and have shed anywhere from 65% to 78%. Silver has been in a two and a half year bear market and at one point shed nearly 65%. Gold has been in a two-year bear market and has shed 36%. Huge cyclical rebounds aren’t an immediate reaction to the scope of these types of declines. These markets are telling us that the worst is just about over with yet more time is needed for a base that will launch the next phase of this secular bull market. If you don’t believe the next phase is worth waiting for then consider the following. Following these major bottoms the mining stocks have rallied on average 60%-70% within five months. In the two-month rally this summer, SIL rebounded 55% while GDXJ rebounded 63% (both on a daily closing basis). Once this bottoming process moves to its final stages, many stocks will be primed for spectacular rebounds that could occur in weeks and months. Readers are advised to watch closely and spot the companies which show the most strength during this retest. If you’d be interested in our analysis on the companies poised to lead this new bull market, we invite you to learn more about our service.

A Signal that Gold prices are too low?