The China Controversy, Gold and the Stock Market

Source: Clif Droke/The Gold Report  02/01/2010
The news spotlight recently was stolen by Google, the Internet search engine giant. A statement issued by Google a couple of weeks ago was greeted by dismay on Wall Street as shares retreated in response to the company’s announcement that it no longer supports China’s censoring of searches that take place on the Google platform. China has defended its extensive censorship after Google threatened to withdraw from the country.

Adding fuel to the controversy, the Obama Administration announced that it backs Google’s decision to protest China’s censorship efforts. In a Reuters report, Obama responded to a question as to whether the issue would cloud U.S.-China relations by saying that the human rights would not be “carved out” for certain countries. This marks at least the second time this year that the White House has taken a stand against China (the first conflict occurring over tire imports).

Without wishing to dramatize an already volatile situation even further, let’s take some time to examine a critically important issue for U.S. and global investment markets. We’ll take pains to avoid the potential political and military ramifications surrounding the U.S.-China issue, focusing instead on the financial implications.

Let me first say by way of disclaimer that any time the topic of discussion turns to China there will always be a certain level of nebulousness and confusion surrounding the issues being discussed. China is very much like Sigmund Freud’s “Dark Continent” in that the lack of transparency in that great country, coupled with Communist Party propaganda, makes it difficult to discern the true state of affairs.

I’ve followed the China musings of several analysts in recent years and have always been perplexed at how there can be so much disparity among what these analysts are proclaiming on any given issue concerning China. Sometimes their statements are diametrically opposed on the issues under discussion, leading one to ask, “How can so many China observers be so completely at odds with each other in their observations and conclusions?”

In light of the recent Google-China conflict, however, I’ve come to the realization that one of the sources I’ve been reading is probably more correct than some of the others. I’m referring to the FRC Money Forecast Letter and its sister publication, The U.S.A./China Letter. For some time now FRC has been forecasting a turnaround in U.S.-based manufacturers here at home based on the contention that U.S. firms in China have already begun a slow exodus from the country. Apparently these firms are discovering that the pot of gold promised to U.S. firms doing business in China hasn’t been forthcoming. It also turns out, according to FRC, that China’s government courted U.S. firms to set up shop in China, only for these U.S. firms to have their technology and intellectual property stolen from them. Now that China has complete access to Western technology and production methods, they no longer have need for these firms. And so the exodus continues with Google representing the latest in a growing number of U.S. corporations that have exited China in recent times.

But the Google issue isn’t the only one troubling the great Red country. It’s free ride at the expense of America’s long-term thirst for foreign imports has apparently ended. One factor that has helped create a reversal of China’s longstanding dominance in the U.S. as a net exporter is the continued weakness of the dollar. The weak dollar has helped to bolster America’s trade balance at the expense of China. In an article by the Grameen Foundation it was observed, “The sliding dollar has already begun swelling the total new manufacturing orders.” Grameen asks rhetorically, “Will manufacturing jobs shipped overseas due to cheap labor come back to the United States due to the current financial crisis?” Grameen goes on to point out that a large number of Chinese factories are closed there due to the scaled back spending by American consumers. Grameen asks further, “Now what effect does this have in bringing manufacturing back to the United States?” Grameen continues:

“The primary reason manufacturers move overseas is purely cost savings. Companies do not move to China for any reasons other than cheap labor. So cheap labor drove manufacturing companies overseas. But America’s cost structure was not rising—it was falling. Meanwhile, China’s costs were rising fast. All of this could bring a massive readjustment in currency values. What would that mean? First, a reduction in the value of the U.S. Dollar. What would a weak dollar really do? A low value dollar, along with a rising yuan (China’s currency) could make any manufacturing overseas commercial unfeasible. That is, the American companies would see no reason to set up factories in China to export to the U.S.”

This analysis confirms what has been seen in recent times, most notably underscored by the Google controversy.

All of this leads us to ask, if in fact U.S. firms begin a mass exodus out of China and back to the home land, and if current U.S. export and consumption trends continue, what impact will all of this have on U.S.-China relations? Or more to the point of this analysis, how will China’s economy withstand the shock this would almost certainly create? Already, according to FRC and other sources, there are telltale signs that China is heading down the same primrose path that was trod by America not many years ago—the path that leads to economic perdition. FRC explains:

“The latest data from Red China [shows] State-owned banks have been throwing cash at any communist party member who wants cash to buy. It is all part of a plan to replace consumer sales to Americans. The trouble is that this fast spread of easy money has already begun producing a giant expansion of bad debts in China.”

Is China’s economy setting up for its first major debacle since its aggressive growth spurt began? If so, it will almost certainly be preceded by a pronounced decline in China share prices. To that end, we’ll be focusing our attention closely on the Shanghai Composite stock index as well as our favorite proxy for U.S. listed China shares, the China 25 Index Fund (FXI).

Adrian Van Eck, in a recent edition of the Money Forecast Letter, observed:

“But there is one nation that is riding a bubble right now and that nation is the People’s Republic of China. Henry Kissinger once told President Nixon that the Chinese people are the smartest on Earth. Yet there is a defect in their official national character that has brought them from very high levels of achievement to very low levels of failure a dozen times over the past 4,000 years. They would build dynasties and conquer nations on all sides, forcing these captive people to pay tribute to the Chinese Imperial Court.

“But then pride turned to arrogance and arrogance caused them to make mistakes—big mistakes and a lot of them. . .Each time that one of their dozen rich dynasties fell, China endured long periods of awful poverty. I suspect that will happen again. . .The Chinese State Bank is spreading billions of dollars in loans around to encourage wild consumer spending by communist party members…all to replace lost sales resulting from the sharp drop off in American consumer products important from China. China’s money has been pushed up in value 20% since Bernanke took over the Fed. Greenspan allowed them to cut the value of their Yuan by a lot (the higher the number per dollar the cheaper the yuan) and then freeze it.

“Because of strong domestic inflation, China can no longer afford the kind of cheap prices they have offered [in the past]. The game is about over for them. And at the same time I expect manufacturing plants to begin coming back to America.”

Over the past few years the China 25 Index Fund ETF (FXI) has been an important indicator for the direction of the global emerging markets, as well as China’s economy. Of technical significance the 30-week (150-day) moving average has been an excellent tool for plotting the trend of the FXI. The 30-week MA has acted as a key support and resistance for FXI many times over the last few years, as the following charts shows.

Of interest, the FXI slipped under the 30-week MA on Friday, Jan. 15, as shown in the following chart.

The internal momentum structure of the U.S.-listed China shares was previously shown to have noticeably weakened heading into 2010 with most of the momentum indicators making a series of lower highs. Notice the position of the CHINAMO internal momentum series shown below. The legend for interpreting these indicators is as follows: 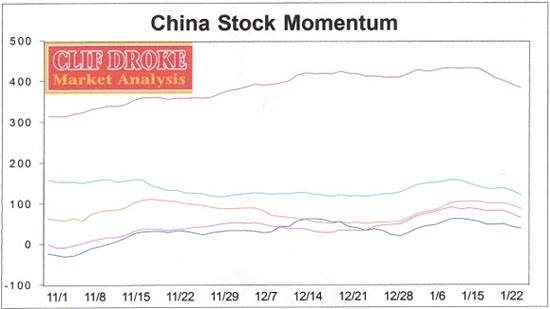 This served as a warning signal of potential weakness ahead for China shares as discussed several weeks ago and the indicators still justify a defensive stance on the China stock outlook, and by extension, the near term gold price outlook.

One of the aspects of stock market gurus that is most off-putting to independent traders is the relentless focus on buying stocks with virtually no discussion devoted to when to sell them. The words of the Chinese sage would apply in this case: “Easy to buy, not so easy to sell.” Stock market guru extraordinaire Jim Cramer is fond of saying, “There’s always a bull market somewhere.” But what of the opposite of this statement? The simple fact of the matter is that there is always a bear market underway at any given time somewhere in the stock market and it usually doesn’t require much work to find out where it is. Rather than focusing all one’s energies on buying stocks at all times, there are times when it’s best to recognize that selling stocks or even selling them short is the best policy. When the internal path of least resistance within a given market sector is down, it only follows that profits will be made by pursuing a trading strategy that’s in line with the downward trend.

During the bear market of 2000–2002 I wrote the book, How to Day Trade Stocks in a Bear Market with an emphasis on tactics and techniques that produce consistent profits in bear markets within stock sectors and individual stocks. The information this book contains is still relevant today but has been supplemented with up-to-date methods that are consistent with the extra volatility and speed of today’s marketplace. Click here to order.

All orders for the book will receive an additional copy of the recently published, “Short Selling with Moving Averages,” which contains reliable strategies for profitable short selling with an emphasis on safety and capital preservation.

Clif Droke is the editor of Gold Strategies Review, providing forecasts and analysis of the leading North American small cap, mid-tier and senior mining stocks from a short- and intermediate-term technical standpoint since 1998. He is also the author of numerous books, including most recently, The Stock Market Cycles. For more information visit www.clifdroke.com.

Sprott: How CB’s are Setting up Next Big Move in Gold

Are Precious Metals Melting or Firming Up?