Everyone knows the concept behind a “fractional” banking system, right? You have $1 in deposits and you lend out $10. The Romans invented the concept and it is widely understood to have been one of the ingredients that led to Rome’s demise.

As per the electrifying CFTC hearings on March 26, and a fact that GATA has long understood, the Big Banks which deal in gold and silver, also known as “Bullion Banks,” apply and utilize the fractional banking system to bullion dealings.

In 2007 Morgan Stanley settled a class-action lawsuit in which Morgan Stanley was selling silver to customers and charging them for storage. It turned out that Morgan Stanley was selling and storing silver that didn’t exist.  One of MS’s defense arguments was that it was common industry practice to sell and store metal that didn’t exist. And as long as the customer buys and sells thru MS without asking for the metal to be delivered, MS can get away with it because the round-trip transaction is cash in/cash out. The scheme crumbled when some investors asked for serial numbers and weights. Details are here, if you are interested: LINK

The key to this scheme is that for each delivery month, a small percentage of the long position, relative to open interest and relative to the short positions, actually stands for delivery. That being the case, the CFTC and the powers that be at the Comex look the other way with regard to the absurd amount of paper gold and silver sold short in relation to the amount of underlying physical gold and silver that can be delivered. It’s a complete “fractional” bullion banking system. But what will happen if some large investors – or sovereign funds or foreign Central Banks – decide to take long positions in gold in silver with the intent to take delivery? I expect that eventually this will happen and we’ll see the Comex-equivalent of a catastrophic bank run.

Another interesting event has been occuring with SLV. Since February 26 thru today, 16.7 million ounces of silver has been removed from the SLV trust. At first glance, this might not seem unusual. However, a quick perusal of the data over the last two years (data history is available on the SLV website), reveals that this is an unusually large amount of silver to be withdrawn over a 6 week period.  What makes it even more unusual is that since Feb 26, the price of silver has risen from $16.46 to $18.41 – nearly 12%.  Typically, drops in the gold and silver held in GLD and SLV correlate with price declines and market sell-offs.

We can only speculate about what is going on.  However, I would like to point out that JP Morgan is by far the predominant holder of the massive silver short position on the Comex. They are also the custodian (i.e. the keeper of the silver) for SLV. And to add one more layer of intrigue, over the past couple weeks, there has been an unusually large amount of silver which has moved in and out of the Comex warehouses. That data can be tracked here: LINK. You’ll note that today ScotiaMocatta experienced a very large withdrawal from its “eligible” category. This category is the silver that Scotia safekeeps for investors and which is not available for futures delivery. Scotia’s reliability as a bullion depository has recently come under intense scrutiny.

Coincidence?  Only time will tell. But it is now becoming much more widely recognized by big bullion investors that it is crucial to make sure that the bullion you are invested in is being held on an “on demand” verifiable basis and that it has not been misplaced by the fractional system that is an accepted industry practice among the bullion banks.

THIS IS REAL GOLD: 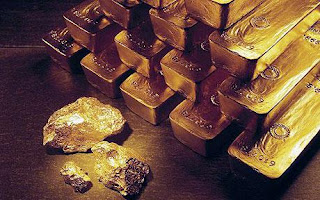 A Deflationary Impulse Would be a Catalyst for Gold Stocks