As someone still learning how to trade better (I hope I never stop learning), I wanted to lay out my thought process for re-entering the GDXJ ETF from the long side over the next week. The following is what I expect to happen, and I will re-adjust if the market doesn’t give me what I expect. I am interested in scaling back into in-the-money long call options on GDXJ with an August expiration.

I took profits on May expiration GDXJ 25 strike price calls on Friday, April 9th and am waiting for a slightly lower GDXJ price before I start buying back into GDXJ calls. Here’s a short-term chart of GDXJ over the past 4 months thru today’s close using a 60 minute intraday chart with my thoughts: 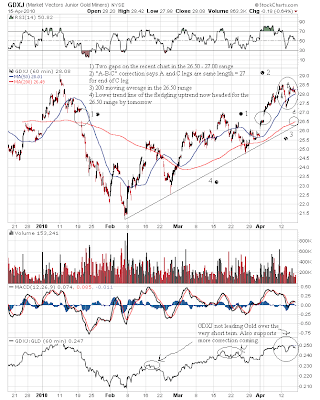 So, my plan is to start scaling back into GDXJ once we hit 27 and buy it down thru 26.50. Of course, with the volatility of Gold stocks we could spike down to 26 pretty easily, especially since there are a few smaller gaps in the 26 range and a drop to this level would scare many into thinking the trend may have changed. Unlike many, however, I believe we will then rocket launch higher into the late spring. I believe Gold is going to re-test its highs and will then surpass them (though it may need a rest at the highs before blasting thru them). I also believe silver will likely outperform Gold on the next short-term leg higher and is also set to re-test its highs for the current secular bull market.

The ongoing short-term correction that began at the highs on April 9th and 12th I expect to complete sometime between tomorrow and next Tuesday. This is just a short-term correction in my view before re-testing the December 2009 highs. I remain wildly bullish on the Gold patch and my outlook still hasn’t changed. Just my 2 cents. Traders, place yer bets…

The Comex and The Fractional Bullion System