As the clash of the titans between the U.S. Dollar and Gold continues, Gold looks much stronger this time around as the U.S. Dollar benefits from a flight to safety. Many are happy to park their money in the U.S. Dollar temporarily even though they don’t like it over the longer term. Risk is relative, after all. How much easier it is to sleep at night once one realizes that Gold is money and a better place to park one’s cash when safety is sought at this point in the economic cycle.

The deflationists who understand that Gold is the center of what money truly reflects are few and far between. The delusion of the international monetary system remains intact and keeps many paperbugs from seeing the truth. The promises inherent in the current irredeemable fiat money system will be broken when the time is right. This is as certain as night following day. The only question is the timing and the specifics of what the new system will look like. When you’re on the right side of the long term trade and understand the eventual outcome, it is hard to be upset at 15-20% annual returns while waiting for the denouement.

There is panic building underneath the surface, just as there was in the late summer and fall of 2008. When that panic manifests, stocks will fall hard, currencies will fluctuate wildly (including Gold), and commodities will not be a safe haven. However, when the dust settles, Gold will be one of the winners. Just as it was in early 2009 when the dust finally settled. All those who point at Gold’s “collapse” in the fall of 2008 are happy to forget that Gold was back at $1000/oz. in February of 2009. They may or may not forget again when the next round of panic ensues. Gold will benefit from the flight to safety. Any temporary blips induced by margin calls should be used as buying opportunities for those who truly understand why Gold is the only secular bull market left standing.

Actually, that last statement is incorrect. The other secular bull market left standing is government debt. All those calling for the imminent collapse of U.S. government bonds and bills have been horribly wrong for a decade now. I don’t see these markets collapsing any time soon. If they do, then we can start to talk about Gold beyond $5,000/oz. Until then, Gold will continue to compete against Uncle Buck for investment funds when there is a flight to safety.

In no particular order, here are some charts I found or continue to find interesting over the short-term. First up, Exxon Mobil (ticker: XOM, 42 month daily chart and see previous post related to this stock): 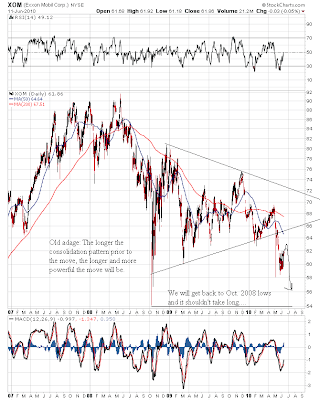 Next up, Freeport McMoran (ticker: FCX, 3 year daily chart and see my previous post on other base metal miner blue chippers RTP and BHP): 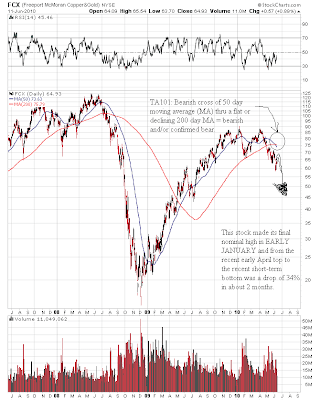 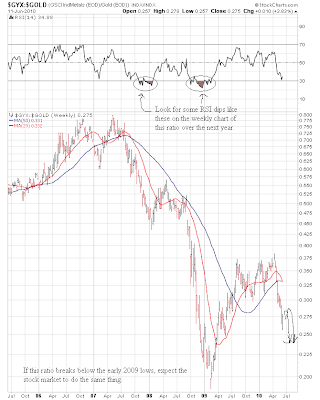 And for those who aren’t watching it, yes, the TED spread ($TED) continued to power higher on Friday: 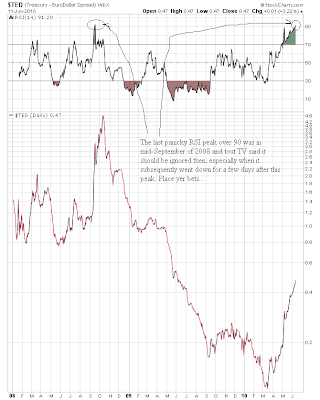 I don’t think there are any serious Gold bulls out there who haven’t noticed the U.S. Dollar skyrocketing just as it did before the last credit and stock market implosion. Here’s one of those pesky Dollar denominated debt instruments that seem to respond to a flight to safety, the 1 month U.S. Treasury Bill ($UST1M): 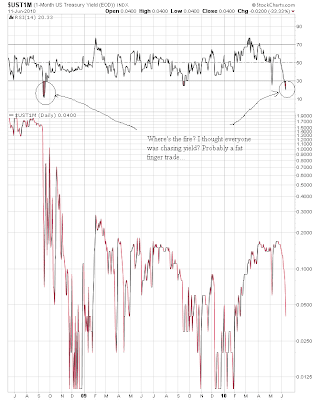 I am sure I am just being overly pessimistic and the Dollar rising is a sign of the strength of the global economy. Economic strength is what the European stock markets are telegraphing after all: 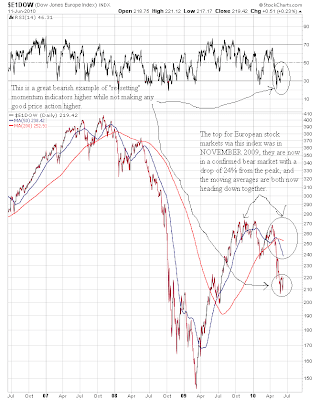 And since China has been in a confirmed bear market for a while, I am sure it is the USA set to lead the world into a recovery. So many Americans have now walked away from their mortgages (and other debt obligations) that, freed from the shackles of making mortgage payments, they are about to cause the economy to catch fire! Given all the high-paying jobs that are being created and protected in the government sector, I see nothing but blue skies ahead…

Gold will continue to benefit from the flight to safety and will continue to crush the performance of the U.S. Dollar, as it has done for the past 10 years running. Part of my bias towards expecting stock market chaos sooner rather than later (well, other than being a put holder on stocks), is that it fits in well with my expectation for an important Gold stock bottom this summer. Of course, Mr. Market has a way of delivering surprises to those who think they have him figured out. This is why I never trade my physical Gold, I only accumulate more of it on weakness. Still waiting patiently for any weakness in the Gold price to add to my savings account. In the mean time, I will be reacting to any further price strength this week in the stock market by buying more puts for my trading account.

Richard Karn: A Bridge Too Far. . .to the Left?

Breaking Down the Chart: Gold and Silver