Do you think the Fed’s decision to move ahead with QE2, despite the strengthening economy rhetoric, was coincidence with the rollover in the “the Formula” and “Leading Formula” in November? Don’t think so. When the formula rolls over, it begins to feed on itself as described by Jim.

Identification of the real secular trends shows the path to profit in this business.

“The Formula” US Fiscal Balance vs US Dollar: Federal Government Budget As A % of GDP, 12 Month Moving Average: 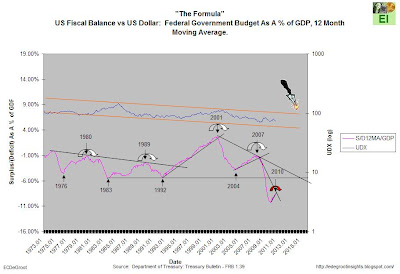 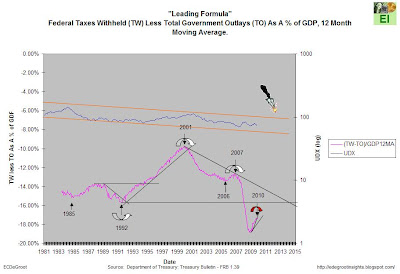 The federal budget deficit rose to $150.4 billion last month, the largest November gap on record. And the government’s deficits are set to climb higher if Congress passes a tax-cut plan that’s estimated to cost $855 billion over two years.

Source:The Timing of QE2 Was No Accident
Previous

Gold & the Overall Strength of the Market

Gold & You: Topping Out or Topping Up