I often harp on the Dow to Gold ratio, as I think it is the easiest way to see the “bigger picture” secular trend of poorly performing common stock markets (i.e. paper) relative to the free market’s real money (i.e. Gold). I have been not-so-patiently waiting for a turn in this ratio back to the advantage of the Gold bulls. Well, we have now gotten to the point where I feel comfortable arguing that this ratio now is likely to provide the best trade over the next 12 months. When I say best trade, I mean the best potential reward/return relative to the risk.

I now see the risk as negligible and the potential reward as substantial in this trade. Here’s a long-term monthly log scale chart of the “Gold to S&P 500” ($GOLD:$SPX) ratio as a proxy for the “Gold versus paper” trade to show you why I think the risk is low for this trade: 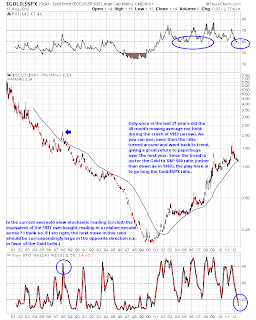 Once a trend was established, and the current trend in Gold outperforming common stocks is very well-entrenched, the 40 month moving average held every time except one in the past 31 or so years. And that includes during the Great Fall Panic of 2008. Pretty good track record, which is why I think the risk for this trade is very low right now and the ability to place a stop loss in case “this time is different” is clear. Scaling in to the weekly chart of this ratio, this time using the $SPX:$GOLD ratio instead of vice versa, shows that the time to start scaling into this trade is during the second half of August (i.e. now): 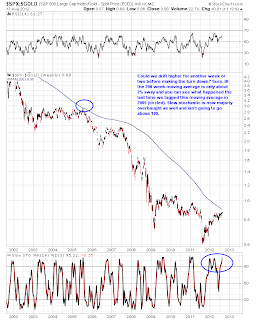 The easiest way to play this trade in a decrepit paper money system is to go long physical Gold. However, since this is a ratio trade, the “pure” way to play it is by going long Gold while shorting an identical dollar amount of the S&P 500 (or Dow Jones Industrial Average) at the same time. There is a double leveraged FSG ETF designed to profit from upward moves in the $GOLD:$SPX ratio, but it is highly illiquid and thus I cannot recommend this ETF since I am partly interested in mentioning this trade because of its low risk profile.

There is another way to play this ratio that is a derivative trade, and one most Gold bulls are tired of hearing about: going long Gold stocks. This is a higher risk trade, but with potential for higher reward. The under performance of Gold stocks relative to Gold has been rough over the past year. Make no mistake: Gold is safer than Gold stocks and will probably outperform Gold stocks as a sector over the full secular cycle of a declining Dow to Gold ratio. However, I am wildly bullish on Gold stocks right now and think they are set to outperform to start the next cyclical bull market in the precious metals sector. Why is that?

Well, below is a weekly subscriber letter from August 12th that summarizes the reasons why.
Gold Versus Paper August 11 2012 Letter

If this type of analysis interests you, consider a one month trial subscription – it’s only $15. Hold onto your Gold and keep it away from Jon Corzine and other depraved banksta-types. Until theDow to Gold ratio hits 2 (and we may well go below 1 this cycle), Warren Buffet and other traditional Wall Street gods will continue to under perform a shiny piece of metal.

Sunshine Profits: Can We Expect a Short-Term Rally in the Euro Index and Temporary Strength in Precious Metals?

Watch Out For A Silver Breakout Higher