The latest warning sign on US equities came from the recent issue of Barron’s. A recent survey of big money managers showed extreme bullish sentiment. 86% polled were bullish on stocks over the next six to 12 months while only 7% were pessimistic. Meanwhile only 11% were bullish on bonds. The cover of Barron’s emphasized the view of the participants with its title “Dow 16,000” and picture of a bull, leaping away from a bear. In regards to Gold and commodities, 50% were bullish on commodities with 35% bullish on Gold.

I’ve provided a chart from the recent Merrill Lynch Fund Manager survey which I find more instructive. It shows fund managers as the most underweight commodities since January 2009. Also note that commodity prices have yet to surpass their 2012 low though fund managers are more bearish than at that time. 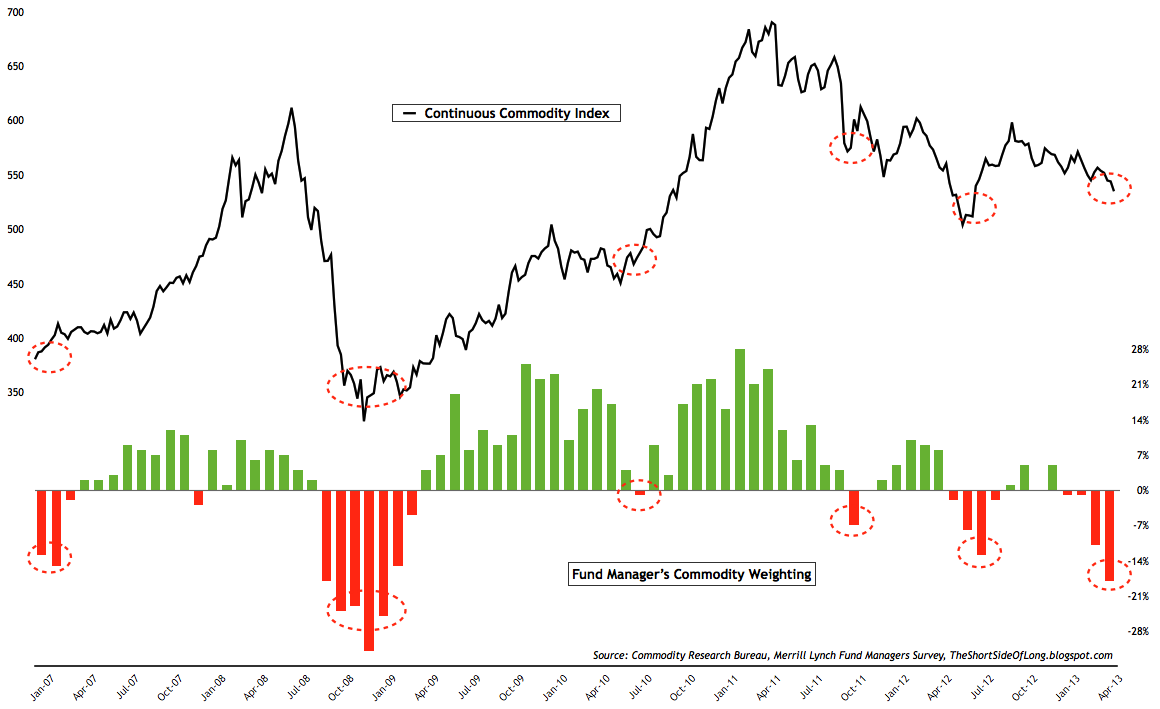 So we have extreme bullish sentiment on stocks and a different view on bonds and commodities. If equities are due for a fall, which asset class would benefit? My initial guess would be bonds. In recent months commodities have really struggled while bonds have started to turn higher amid negative sentiment. The bullish consensus is only 43% for bonds. Last summer when bonds peaked it was 80%. The fact that bonds are rallying amid terrible sentiment is a sign of strength and sustainability. More money could move into bonds and propel them to another all-time high while stocks go sideways and commodities try to find a bottom.

With respect to hard assets, let’s remember that fears of deflation often act as a catalyst for Gold and commodities. Need an example? How about the performance of gold stocks from 1931 to 1935. Commodities were in a bull market from 1933 to 1951. Remember the fears of deflation in 2001 and 2002? That was a marvelous time to buy commodities. Oh and let us not forget 2008. This is not to say you should run out and buy commodities at this moment. Fears of deflation usually instigate large declines in precious metals and hard assets before they eventually rebound and move much higher. That is what history tells us.

History also shows us that Gold can rally with bonds. The chart below shows bonds, Gold and a 50-week rolling correlation between the two. We’ve highlighted times when both assets have gained together. Also note how often the correlation is in positive territory. 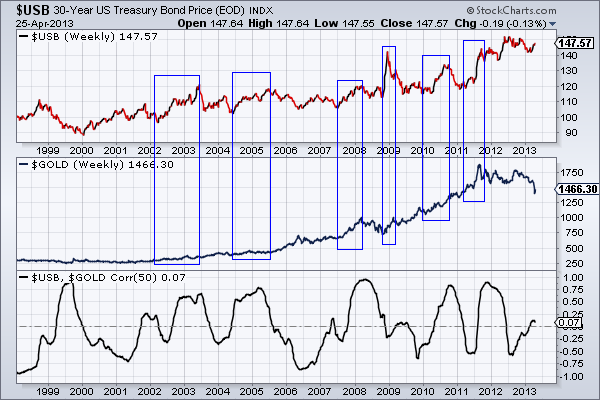 Europe is mired in recession and the only positive, Germany, looks headed for recession. This would obviously bode well for bonds and precious metals being so oversold, could rally on hopes of some action from the ECB.

In the coming weeks and months, look for bonds to assume market leadership, stocks to stagnate and precious metals to recover some losses from the devastating selloff. This view is not only supported by technicals and sentiment but by economic fundamentals. Weakness in Europe is spreading to Germany while the US economy is likely to slow further in the spring (if it’s even mathematically possible to slow from an already slow rate).

More importantly, the relationship between precious metals and stocks (over the past 20 months) is very instructive. Precious metals have performed poorly recently because of receding inflation and because stocks have performed well. (When stocks perform well, precious metals will struggle). As we noted above, stocks are performing well because dividend yields are higher than you can get in a savings account or on government bonds. It’s a safe-haven, anti-inflation play that is a step up (risk-wise) from bonds. Ultimately, when inflation picks up (late 2014) money will move out of stocks and bonds and into precious metals and secondarily, commodities. That is the big driver for the next cyclical bear market in stocks, the start of the next secular bear market in bonds and the final cyclical bull market in precious metals and commodities.

As for the short-term, I would watch precious metals miners for hints. The stocks lead the metals and they lead this big move down. Currently they are more oversold than 2008 (according to RSI, bullish percent index and volume) and have started to rally a bit. Look for the HUI to fill its gaps up to 320 in the short-term. If you’d be interested in professional guidance in uncovering the producers and explorers poised for big gains in the next few years then we invite you to learn more about our service. Tiho Brkan: We are much closer to a major low which will be formed in the coming weeks”