A series of long-term charts suggests to me that we are getting ready for a Gold stock explosion higher that should begin before the summer is over. I am biased due to being rabidly bullish on Gold stocks right now, both intellectually and financially. Please take the following technical analysis smorgasbord with a grain of salt given my greedy dreams of speculative riches, which clearly bias my perspective.

Technical analysis should be objective, but the reality is that one person’s bullish chart is another’s bearish warning chart. This is what makes markets and why it ain’t always easy to make money as a trader. In any case, I believe we are on the cusp of a major move higher in Gold stocks as a sector.

I think the bottom in Gold stocks will roughly correspond with a cyclical top in general stock market indices, a la 2001-2003, 2007-early 2008 and 1973-1974. Many Gold stock investors equate general equity bear markets with Gold stocks getting slammed due to the 2008 fall crash fiasco that dragged down everything except the U.S. Dollar. Funny how memories are not only selective but also favor recent history over older history.

However, I am suggesting that it is time to do precisely this. I would favor a deflationary-type bear market over an inflationary-type bear market, but I don’t claim to know for certain. There is no reason the U.S. Dollar can’t rally here against other worthless currencies, as all currencies are sinking relative to Gold (and silver). The paperbug game is to focus on the individual currencies and deliberate about whether a total overall government debt to GDP ratio of 200% versus an annual fiscal deficit of 10% of GDP is more important. I call a deadbeat a deadbeat and keep my savings in physical Gold, the only hard currency that can’t be effectively issued by decree. It is for this reason that the GLD ETF is not a “safe” savings vehicle, but rather a short-term speculative vehicle, as it is designed to divert money from the physical Gold market and allow the paper game to continue for longer than it should.

I have been a hard-core bear on general equities over the past 2 years. I have been very, very wrong. But, there is a limit to what a bear market rally within the context of a secular equity bear market can achieve. We are fast approaching that limit. Now, I no longer think I know exactly when that top will occur, but I don’t think we make it to the end of the year before the bear market begins. The topping process may take another few weeks or another few months. In the end, I don’t really care.

The reason I don’t care is because I think Gold stocks are going to rocket higher and more money can be made going long Gold stocks than going short the market, at least for the first 6 months or more of the looming cyclical stock bear market. And, as any seasoned Gold stock investor should know, Gold stocks can move awful fast – a gain of 100% or more in the Gold stock sector in 6 months is not a pie-in-the-sky proposition.

Anyhoo, onto my tea leaf tools. Here are some charts that I think are screaming for bulls to buy on the next dip. The last dip was a great buying opportunity and the next low may or may not be a lower low, but I think we’ll get another significant pull-back in general Gold stock indices.

Here’s a chart that compares the HUI Gold Bugs’ Index ($HUI) to the Dow Jones Industrial Average ($INDU) Index (i.e. an $HUI:$INDU ratio chart) over the past 12 years thru Friday’s close: 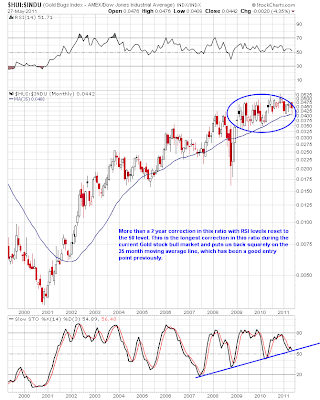 And I can’t seem to do an analysis of the Gold sector without some form of Dow to Gold ratio chart. Here’s a 12 year chart of the Gold to Dow Jones ratio chart thru Friday’s close (i.e. a $GOLD:$INDU ratio chart): 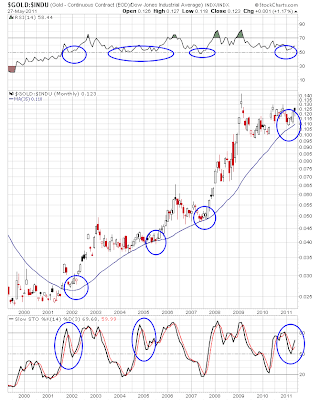 And why does the Gold to Dow Jones ratio matter when it comes to Gold stocks? Well, let’s look at the entire history of the current secular Gold bull market that began at the turn of the century. Here’s the same Gold to Dow ratio chart (i.e. $GOLD:$INDU ratio chart, the candlestick plot) plotted along with the $HUI Gold Bugs Index (black straight line) on the same chart over the past 12 years: 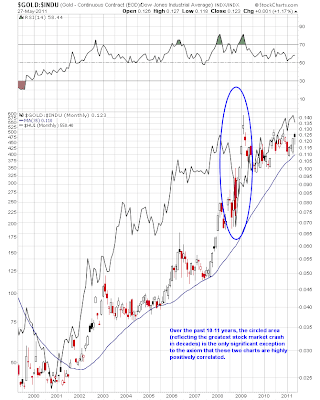 And finally, the concept of the “real” price of Gold. I learned this concept from Bob Hoye and I think it is key to understanding Gold miner profitability. Profits eventually should be reflected in stock prices, though many Gold mining companies seem to do whatever is in their power to make sure this isn’t the case… (e.g., share dilution, political struggles, Gold price hedging, etc.). When viewing Gold stocks as an overall sector, however, the real price of Gold is important and I use the Gold price divided by the $CCI or $CRB commodity indices. Because energy is an important cost to mining firms, the heavy oil weighting in the $CRB index may actually be a good thing. In any case, here is the $GOLD:$CRB ratio chart over the past 12 years: 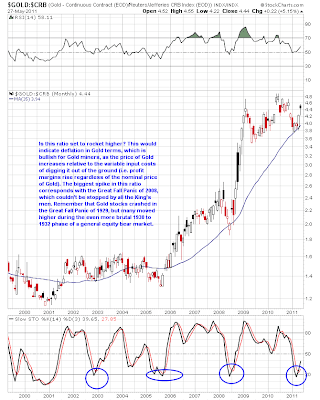 I think Gold and Gold stocks could top on a short-term basis in the next week or so, then decline to a potential final low in June. Summer is rarely an exciting time for the Gold sector, but buying when things are quiet is often a way to reap rewards once the fall hits. We could have a summer spike lower like we did in August of 2007 or things could simply drift quietly lower in the Gold sector. In any case, we are getting to the point where the Gold bull market is going to outshine every other market. If it’s a deflationary bear market with the US Dollar rallying, which I would favor, the Gold patch will be the only place to be. If it’s an inflationary bear market with the US Dollar crashing, then silver will likely outperform Gold again. I don’t claim to know for sure, as trying to pick the prettiest paper currency troll is not an interest of mine. Gold will win the Clash of the Titans battle in the currency arena, of this I am certain.

Stay long in physical Gold until the Dow to Gold ratio gets to 2, and we may get below 1 before this secular economic mess is over. Gold stocks are for the speculatively inclined, not the faint of heart. However, I believe this summer is a speculative buying opportunity in the Gold patch that will looked back upon as a “duh, of course I should have bought”-type opportunity. This mad Gold stock speculator couldn’t have a more rosy view of the future, but only when the future is priced in Gold.

Silver and Miners- Whats Next?