When ignoring the day-to-day noise and focusing on the intermediate to longer term, all the pieces in the puzzle are lining up for another significant cyclical bear market. Yes, policy makers will do everything in their power to prevent it, just like they did in 2007 and 2008. Bear Sterns, Lehman Brothers, Fannie and Freddie Mac – there were government interventions and guarantees all along the way. All to no avail, although the United States apparatchiks and bankstaz did manage to waste a lot of other people’s money. Now it is Europe’s turn to bail out that which shouldn’t be bailed out in order to save the elite from the losses incurred on their maniacal gambling. When you know you’re going to be bailed out at the first sign of trouble, why not be as reckless as possible in the quest for ever increasing profits?

This time will be no different than the last, however. There comes a time when the urge to hit the “sell” button among those risking capital becomes a herd-like instinct as fear begins to overwhelm greed. Will “QE to infinity” stop us from ever seeing a bear market again? The question would make me laugh if it weren’t actually being seriously considered by so many investors.

When looking at charts of stock markets around the globe, there are some serious warning signs that a global bear market is on the horizon for the remaining Western economies that aren’t in one already. Much like the summer of 2007, the writing is on the wall and yet many believe that central banks and fiscal stimulus can prevent the next bear market as long as desired. This is nonsense. Although potentially correct in theory (give everyone $1 billion in cash and all prices will rise, including common equities), this is not how things have worked in the real world even in recent history. The money goes to the banks, not the people, and when the banks hoard the money due to risk aversion, asset prices fall. Then the bankstaz swoop in and buy using other people’s money or money created out of thin air and the game starts all over again.

No sense crying over the way the world works. It isn’t fair, of course. But we punters can at least try to profit from these manic-depressive swings related to a secular private sector credit contraction being fought tooth and nail by clueless apparatchiks.

But enough blabbering, as the charts are what contain the truth of the markets. Though certain Western economy stock markets are holding up well (e.g., U.S., Germany, UK), they will apparently be the last to fall this cycle and other economies are giving the preview of what’s to come. I am not significantly short anything (yet), but you can bet I will be when I think the time is right. Recently I looked at financial firms and their warnings. This time I thought I would look at whole countries and the warning signals they are flashing for those willing to listen.

First up, one of the world’s largest economies, Japan. Here’s a 2.5 year weekly chart of the Nikkei Index ($NIKK): 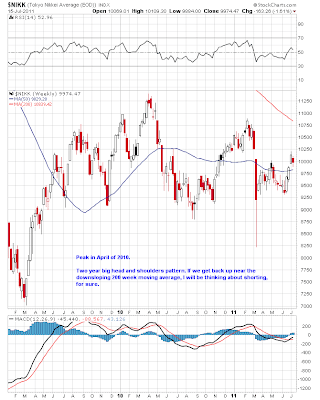 Next up, the powerhouse growth story that is supposed to rescue us all: China. Here’s the Shanghai Index ($SSEC) using the same 2.5 year weekly chart format: 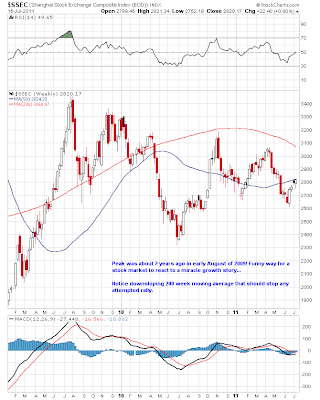 Apparently, the growth in China is not enough to have their stock markets rise significantly, despite money printing over there that is on the verge of making Helicopter Ben blush. Warning: does not compute. Super fast growth plus massive money printing = stock market bubble (doesn’t it?).

Next up, Brazil, the resource powerhouse that can’t stop the “hot” money flows from coming in: 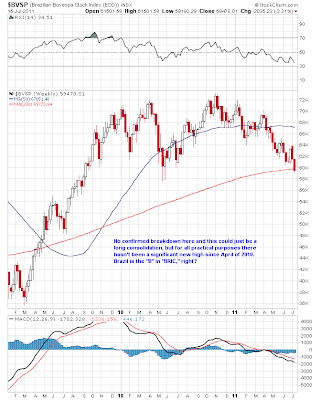 Moving on to a few peripheral European countries, let me preface these charts with a little comment. People like to say that Greece or Portugal or Ireland are small economies and don’t make that big of a difference. The people who say this are the same ones that said “subprime is contained,” “Bear Stearns is just one company,” and “soft patch, green shoots, Goldilocks, muddle through, everything is fine, everything is fine, EVERYTHING IS FINE!” In other words, people you probably don’t want to trust too much. It was an Austrian bank default that set off a panicky chain reaction in the 1930s, not a British one (Britain was the economic superpower of that time). 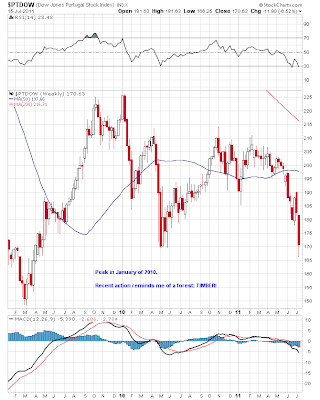 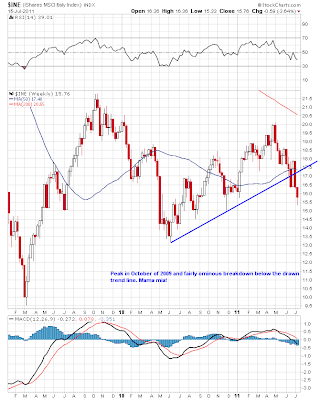 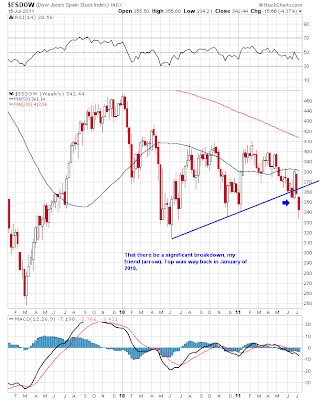 Ireland ($IEDOW) is on the verge: 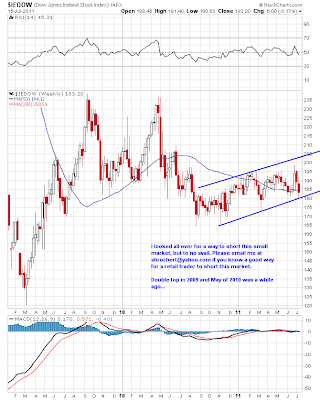 And the last of the so-called PIIGS, poor Greece ($GRDOW): 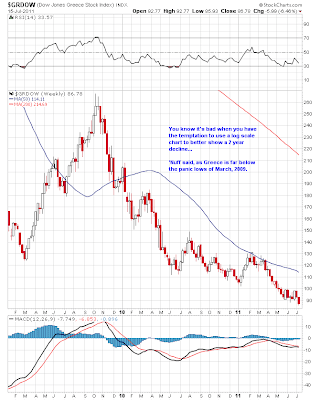 Getting to a slightly larger European fish, the French stock market ($CAC) ain’t exactly smelling like a rose at current levels: 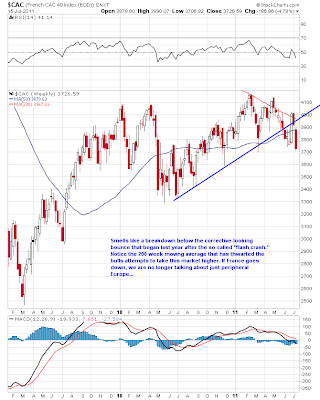 At least we can count on Australia ($AORD) to power higher on the back of insatiable Chinese demand for everything “raw,” right? 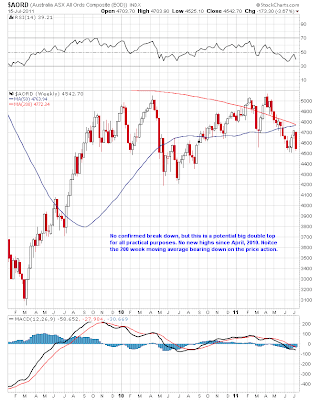 If all those currency reserves in China plus 20-30% (or more) per year monetary growth in China can’t buy enough raw materials to push up Australia’s stock market, what happens when the point of recognition related to Australia’s bursting housing bubble hits?

And what of the Baltic Dry Index ($BDI)?: 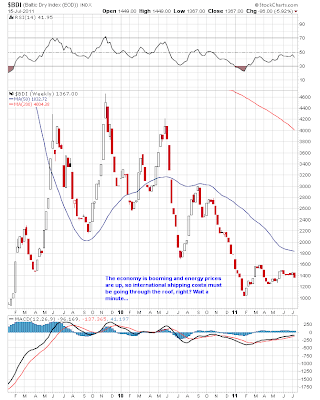 Well, at least the bond market is signalling hyperinflation, so we don’t have to worry about prices falling any time soon. Here, just look at the 1 year United States Treasury yield ($UST1Y) chart: 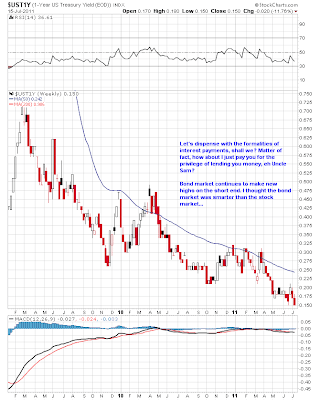 Just some food for thought among those trying to figure out where we go from here over the next year or so. I know which way I am leaning and it ain’t towards the paperbug crowd’s side. Matter of fact paperbugs, how about that Dow to Gold ratio? 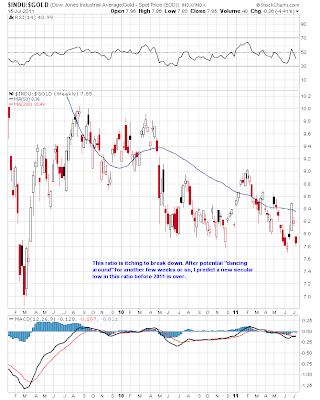 Bottom line: Don’t be a bag holder here. Use rallies to lighten up on long positions in common equities. If we have a nasty common equity bear market, Gold stocks may or may not be a safe haven, but physical Gold held outside the banking system will do just fine (and probably a whole lot better than fine). Navigating the current equity minefield is not for the faint of heart, to be sure.