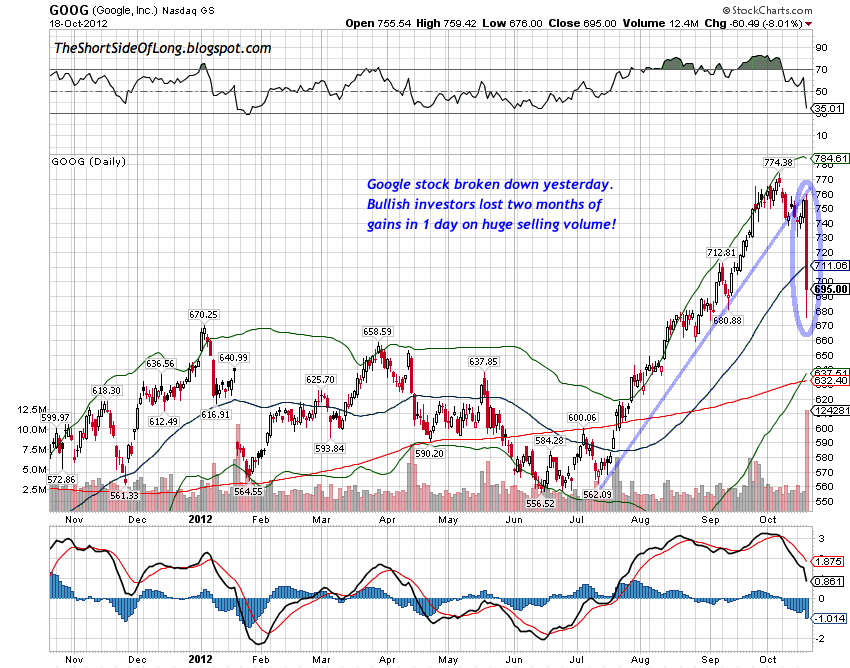 Source: StockCharts / Short Side Of Long 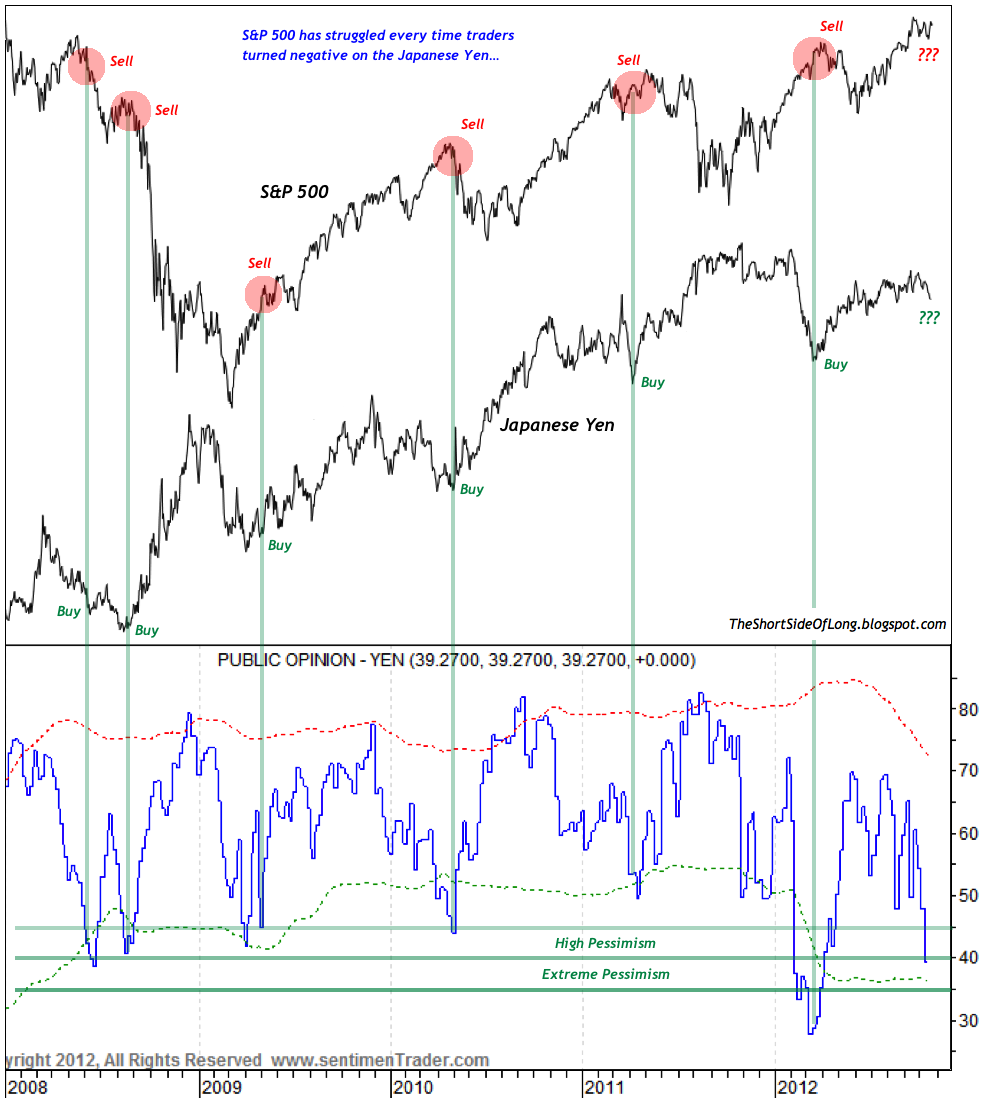 Source: SentimenTrader / Short Side Of Long 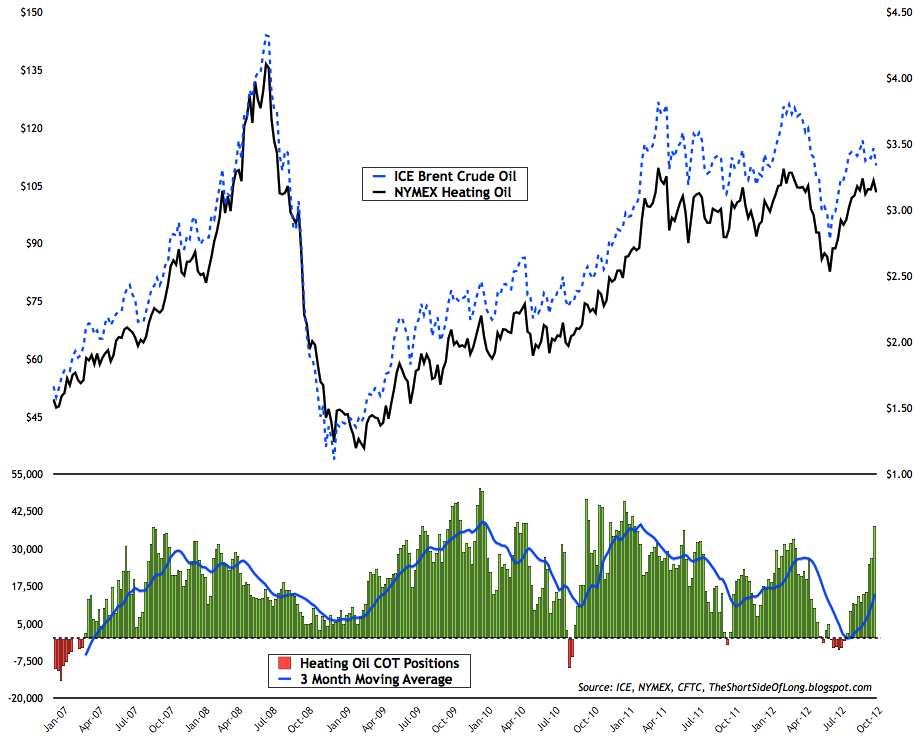 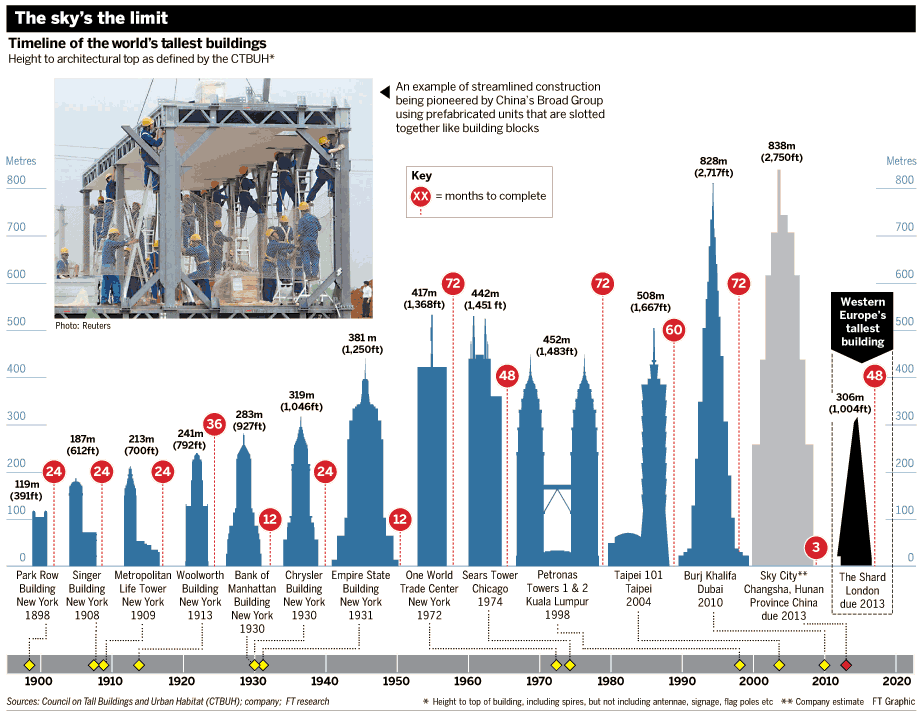 Source: Financial Times
Featured Article
There are two parts to this featured post. The first part is more linked to the mechanics of investing and how to try and reducing mistakes (a few emails I have received have been to do more with the way I invest instead of what I invest into), while the second part turns back to the topic of what we could expect in the Precious Metals market.
Part I: As I was reading all my favourite blogs and newsletters in late September and early October, it became obvious very quickly that every man and his dog turned into a Precious Metals bull. Charts were popping up left, right and centre of how Gold’s almost vertical short term rise would continue into the skies. Here are some examples of predictions by consensus calls done between late September and early October, showing how Gold was going to go to $1,900 or even $2,000 per ounce.

Before I continue, I’d like to say, I am not picking out certain investors for the sake of them being right or wrong. This is capitalism so it is not about who made what call, but instead it is about the money / profit / gain. Personal money is always in question and some of the time even other people’s money is also in question, therefore what I am always trying to teach my readers is basically to either be a contrarian or end up being a casualty.

Regardless of whether something is in a bullish or bearish trend, following consensus and not doing any of your own thinking is usually a good way to go broke, very quickly. Remember, when you see a lot of people drawing vertical upside arrows for any asset, like in those six examples or hundreds of others seen throughout the internet during late September and early October, it is usually a signal that something completely opposite will happen. 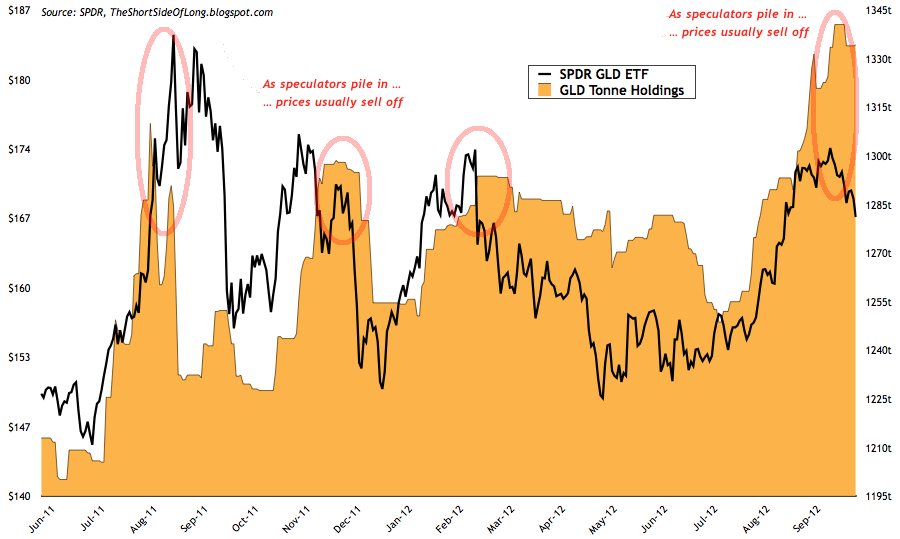 Source: Short Side Of Long
Be it Merrill Lynch, UBS or Deutsche Bank overly confident technical newsletter calls, or be it consensus blogger calls, or be it contrarian sentiment surveys, or be it retail hot money flowing into the sector again (chart above), or be it high bullish exposure by hedge funds via COT, or be it the rapid increase in Comex open interest, it became very clear to me that instead of Gold going up to $1,900 or $2,000 as “the mob speculators” predicted in late September, it would probably go to $1,700 or even lower first. 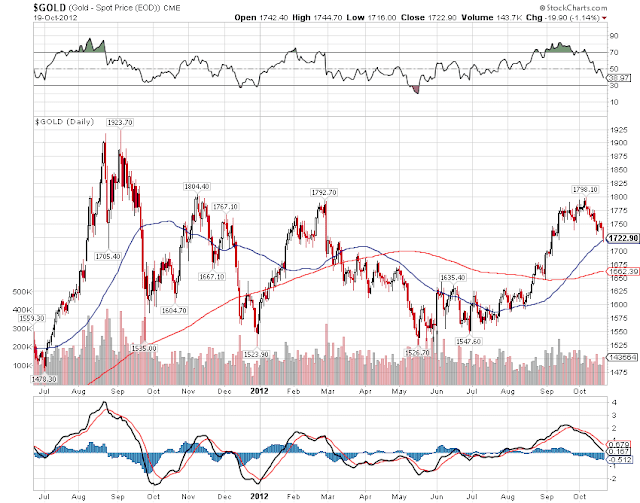 Source: StockCharts
Personally, two major purchases I made within the Precious Metals sector were in late December 2011 and also early July 2012. While others turned very optimistic as prices rose into late September, I noticed that the short term froth became apparent and therefore, I turned very cautious. Even though my fund cash inflows as a % of NAV has been increasing from various partners, with the pressure to gain more exposure to PMs due to QE3, I refused to chase the price.
I delayed purchases even though I am very bullish on long term Precious Metal prospects and as already explained above – I’m always trying to discipline myself to either be a contrarian or I will end up being a casualty. I plan to do more of these real time examples through the course of the PMs bull market. Hopefully it helps some of you who are trying to practice disciplined investing as I’ve learned, and still continue to learn, the hard way! 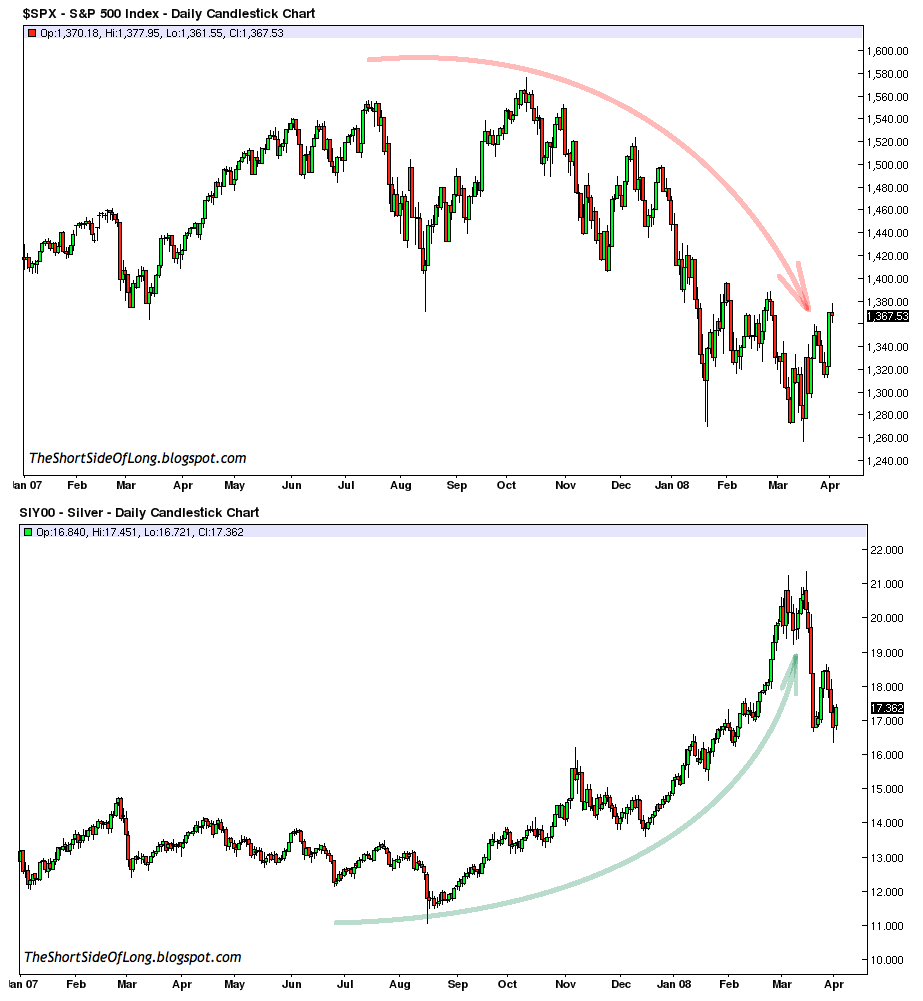 Source: BarChart / Short Side Of Long
Part II: An interesting number of events happened during 2007, which hold quite a few similarities to current market conditions. During the early parts of 2007, economic activity started to deteriorate and the subprime crisis started to spread throughout the financial system. This was followed by a decline in revenues, earnings and profits margins, which forced stock market prices to top out around the middle parts of 2007.
To try and re-start economic activity and reflate risk assets, Ben Bernanke stimulated the economy through a monetary policy of cutting interest rates. But this didn’t really help the stock, earnings and the economy and instead just inflated the price of commodities, including Precious Metals like Silver (seen in the chart above). 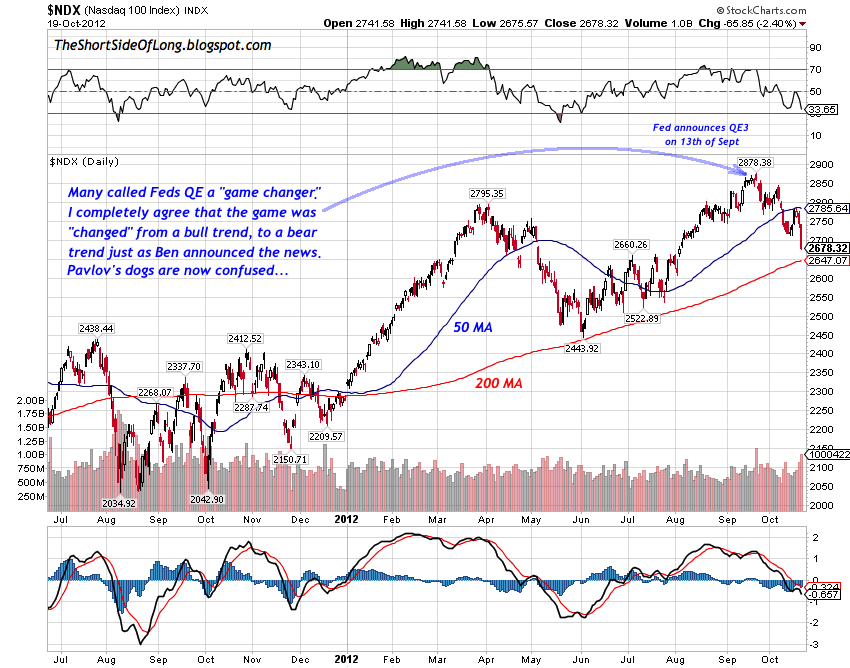 Source: StockCharts / Short Side Of Long
The fundamental events of late 2007 closely link to the current deteriorating economic activity, falling revenues / earnings  / profit margins and topping out of stock price (many leading indices like the Nasdaq are very weak). In the background, the Eurozone Debt Crisis, with contagion similarities to the Subprime, has been spreading throughout the financial system.
During the early parts of the Eurozone Debt Crisis in 2010, the centre of attention was Greece, but we have quickly moved towards Spain and Italy. Eventually, I think the whole Eurozone will be in a crisis and even Germany will be affected. Even after 20 plus EU emergency summits, we are without a proper long term solution (but that is a story for another day). This is very similar to the way we started off with the US subprime, which eventually spread globally in a full blown financial crisis.
To stop these events from cascading into a full blown crisis, is the same man who tried to stop the Subprime events from cascading – Ben “Helicopter” Bernanke. Together with the rest of the FOMC board of dovish presidents, Helicopter Ben announced unlimited QE program which is once again partly the cause of rising commodity prices including Precious Metals. At the same time, money printing will most likely not help the economic activity including revenue, earnings and profit margins which stock prices correlate very highly with. 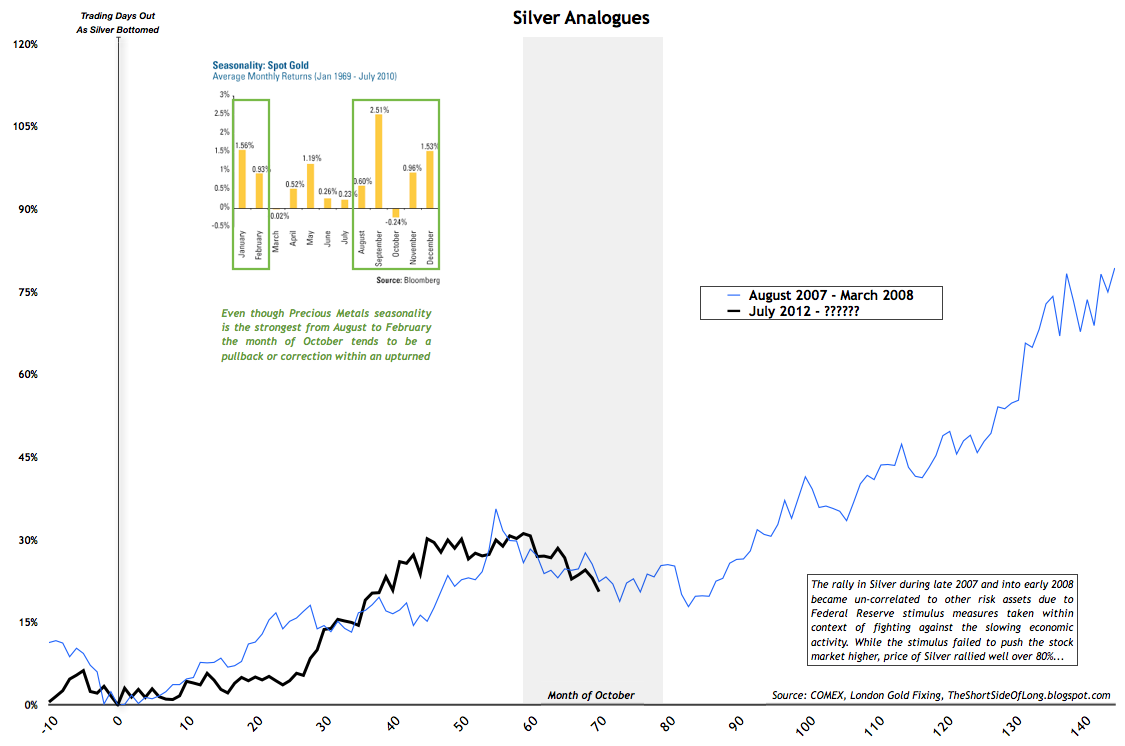 Source: Short Side Of Long
So are we repeating 2007, where the Equities top out and Precious Metals take off? I am not 100% sure, but the chart above shows that so far everything is moving according to the plan. The close relationship in price between August 2007 with Bernanke cutting rates is very similar to the recent bottom in July 2012 as Bernanke launched QE3. If the analogue as well as the seasonal pattern holds, we should see some more selling in Silver for the rest of October (bad seasonal month), before we resume an uptrend.
On the other hand, if the analogue pattern does not hold, Precious Metals could join the selling pressure with other risk assets like equities, currencies and industrial commodities. The important point to remember is that Precious Metals remain in a long term bull market and the key for wise investors is to always buy low, when the majority are sellers. In other words, do not panic if prices decline, but instead just accumulate more. Helicopter Ben will just increase the monthly QE dosage for all the heroin addicts and Pavlov’s dogs out there.
As cash levels swell up in my fund, in the coming weeks or months, I will consider adding exposure to the PMs sector again. After all, in a bull market, we are meant to be buying (sounds simple, but many forget this basic rule). However, I won’t just buy at any point or any price. I would like to see some or maybe even all of the following criteria, before I add further funds to this asset class:

Finally, a major buy signal would be to see some of the consensus bloggers and technical analysts, who were predicting $1900 Gold as recently as a few weeks ago, to start doubting Gold’s uptrend because their Elliot Wave counts, cycle frameworks and various technical indicators break down rapidly.

As I have been saying all along, it is my view that certain risk assets like Precious Metals and Agriculture will benefit much more from Fed’s QE, while other risk assets like stocks might not benefit at all. So therefore stay patient, stay alert and stay a contrarian. Remember that when it’s obvious to the public, it is obviously wrong.