Things are going to continue to get darker economically. Nothing has been solved but massive currency debasement has already occurred to try to stem the tide. The reason is simple. I forget where I stole this chart from and if anyone knows who is making this chart and keeps regularly updating it, please let me know so I can check their site periodically: 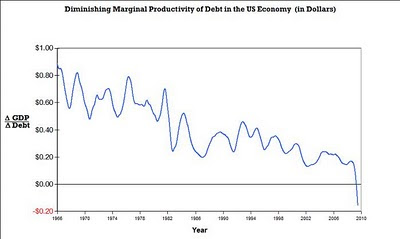 New debt is now a drag on the economy rather than a boost. This is a bizarre concept. Piling more debt on top of the old, rickety, sky-high debt pile currently in the economy now actually makes things worse. This is a deflationary trap that will require new approaches to stoke up true inflation in the economy.

Now I realize that Prechter doesn’t think inflation can be created in this environment and all attempts to inflate will fail, but Mr. Prechter assumes people will play by the rules. The current crew in charge is an amoral group fixated on ultimate wealth and power. They will rape your dog if there’s money in it.

Just like in the 1930s and 1970s, the currency will be aggressively debased to keep the games going. In the 1930s, the U.S. watered down a decent Gold standard and turned it into a quasi-Gold standard after confiscating the Gold of private citizens. This devalued the currency by 69% overnight (Gold peg changed from $20.67/oz to $35/oz). Savers got screwed.

In the 1970s, the Gold standard was completely abandoned and rampant inflation ensued, with Gold going from $35/oz to $850/oz at its peak only 9 years later (a 24-fold increase). Savers and those on a fixed income or invested in government bonds got particularly screwed.

We stand on the threshold again. There is no way out of the current debt situation the U.S. is facing. We are not the only ones in trouble but people who think the PIGS are in big trouble and we are not don’t understand what is happening. “We are the reserve currency,” they say with an arrogant misunderstanding of what happens to an old, cocky prize fighter that insists on continuing to lead with his chin.

No, the U.S. is not a horrible country and no, it is not the end of the world. But it is the end of the line for those in economic denial that have a little money saved. The U.S. Dollar will be aggressively devalued over the next five years. I just don’t know when or how it will occur. Will the “powers that be” stop fighting Gold and let it rise naturally as a way for all currencies globally to depreciate? Will the IMF or some other super sovereign entity become the world’s central bank and everyone will devalue against the new one world currency?

I am an ant. I don’t know. But I do know that the major currencies of the world will all be debased aggressively to allow the banksta debt masters to be at least partially paid back. Gold is the only currency that can’t be debased by banksta or bureaucratic decree. Granted, they will continue to try to suppress the Gold price for a while. Consider today’s announcement of the IMF selling more Gold.

Really think about this. If you’re a Gold bull, you’ve known about the sale of this Gold by the IMF for months if not years. Why would an organization that can print up paper debt tickets out of thin air sell physical Gold to raise more debt tickets? Is it because they need the money? Of course not. It is designed to crush Gold and crush the spirits of Gold speculators. Gold is a competing currency that bankstaz and governments do NOT want you to be interested in.

If everyone turns to Gold, the Ponzi scheme collapses. If people refuse to accept paper debt tickets as money, then the game is up. But when bankstaz and governments are desperate to inflate and borrow more to pursue ridiculous schemes, Gold is actually the most conservative investment available.

There is already open discussion of seizing 401(k)s and other retirement funds from people and forcing it into government bonds. There is already an open door that allows money market redemptions to be frozen at will by private firms without government oversight. There is already a central banker who has publicly stated that Dollars can be created at almost no cost and dropped from helicopters if needed to spark inflation. When the job of those in charge is to lie constantly, don’t expect any more direct hints before you get screwed out of your life savings. Yes, stocks can rise in nominal terms during an agressive inflation, but on an inflation-adjusted basis, stocks will decline (think Dow Jones Industrial Average from 2000-2007).

The deflationary collapse scenario can occur. No question. This is the irony of our situation. We ants have no control individually over monetary policy. Only collective rioting and bloodshed has a chance to free the country from the grips of banskta interests. If the federal reserve decides to stop issuing credit, the economy will collapse in a deflationary heap. If they decide to inflate at all costs, then we risk extremely aggressive inflation or possibly hyperinflation. We are on that razor’s edge between the two.

Because the central banks must keep the sheeple calm, inflation is a more politically expedient option. Destroying the currency just a little more will kick the can down the road another year or so. It makes the most sense, since the bankstaz will benefit from an inflationary policy. Especially now that the federal reserve owns over a trillion dollars of mortgage debt. Of course, if inflation doesn’t work, the fed will simply hand the debt over to the U.S. Treasury and allow the debt to explode on the government balance sheet. Remember, the federal reserve is a private, non-federal, for-profit corporation. Their interests are aligned with America only as long as it is profitable for them to be.

Now, where it gets tricky is in the confidence arena. The party line is that Gold does well during inflation and poorly during deflation. I think Gold does well when confidence in monetary policy and/or the government behind it is low. Deflation or inflation becomes a side argument. For example, even Prechter will tell you that deflation is everywhere right here and right now. So why is Gold kicking the U.S. Dollar’s behind when it comes to overall returns since the beginning of the bear market that began in October of 2007? Oh, that’s right, Gold is going to collapse any second and the Dollar is going to rocket higher to nose bleed levels.

Just like in 2008, right? Oh, wait, Gold corrected to the high 600s in the crash then was back at its all time highs around $1000 in February of 2009, during the most intense part of the deflationary panic in the stock market and this happened while the U.S. Dollar Index was still rising! Hmmmmmm.

The type of economic dead end we find ourselves in currently leads many to Gold. Say what you want about George Soros and John Paulson, I don’t think many would consider them “dumb money” in the investing world. India is not and has never been “dumb money” when it comes to Gold and they think $1050/oz is a too-good-to-pass-up price for Gold.

Gold is an insurance policy. It is supra-sovereign wealth accepted in any major economy. No, you can’t buy bread with Gold, but you can’t buy bread with the Dow Jones or T-Bills either (first you have to cash in your investment, then you spend the money – silly paperbugs!). No, you can’t eat Gold, but it is kinda shiny and purty to look at and T-Bills taste like crap anyway. Even if you don’t want to hang out in a bunker, you can profit from physical Gold.

Paper Gold helps to suppress Gold’s secular bull market and delay its advance. Physical Gold investment demand is what helps to drive the price higher. Paper Gold leaves one vulnerable to the exact counterparty risk one is trying to avoid by making a Gold investment.

In the final few years of a declining Dow to Gold ratio headed for 2 and possibly less than one, things get dark in a social and economic sense. The late 1970s and early to mid 1930s were not the happiest of times. However, both eventually led to an economic spring once the excesses of the previous era were (partially?) wrung out of the system. This time will be no different in the long run. But the secular Gold bull market has a long ways to go from current levels. A long way.

Red Alert: Next Debt Crisis is Near

The 13 Year Gold Bull Has Much More Room To Run