The following is excerpted from a commentary originally posted at www.speculative-investor.com on 16th September 2012.
An Appropriate Quote
The great H.L. Mencken wrote:

“As democracy is perfected, the office of president represents, more and more closely, the inner soul of the people. On some great and glorious day the plain folks of the land will reach their heart’s desire at last and the White House will be adorned by a downright moron.”

Democracy in the US clearly reached Mencken’s “perfection” with George W Bush’s rise to the presidency and has since remained perfect. However, it occurred to us late last week that with a few minor tweaks the above quote could apply just as well to central banking. Specifically:

“As central banking is perfected, the office of Fed chairman represents, more and more closely, the inner soul of the people. On some great and glorious day the plain folks of the land will reach their heart’s desire at last and the Federal Reserve will be adorned by a downright moron.”

There is no longer any doubt that central banking achieved Mencken’s “perfection” with the ascent of Ben Bernanke to the role of Fed chairman.
Fed Up
So, the Fed has done what we thought it would have enough sense not to do at this time. The US now has “QE3”. The Fed has said it will purchase $40B per month of mortgage-backed securities, indefinitely. This is being done to “put downward pressure on longer-term interest rates, support mortgage markets, and help to make broader financial conditions more accommodative.” Interest rates are at generational lows, but the Fed believes that what the US economy really needs right now are lower interest rates.

Suppressing interest rates to below their market level hurts savers and helps debtors. At least, it helps the debtors that are able to borrow at the artificially low rates. The federal government is by far the biggest debtor capable of taking advantage of the artificially low rates, so the government is clearly the biggest beneficiary of the policy. It is therefore fair to say that the Fed’s policy brings about a transfer of wealth from private savers to the federal government. No good economist would view such a wealth transfer as a net benefit to the economy. It is also unethical. Bad economics and bad ethics — that’s what the Fed is all about.

In the good old days (prior to this year, that is), the Fed would wait for a deflation scare before opening the monetary spigots. This latest inflation program therefore marks a huge change in strategy. This change in strategy, as opposed to the dollar value of the new inflation program, is the most important aspect of last week’s decision by the Fed. More specifically, $40B per month of debt monetisation is not a big deal in the grand scheme of things (as many deflationists will probably point out), but it is a big deal that the Fed has introduced a new inflation program at a time when there is no sign of any price deflation and when the rate of monetary inflation is already high.

To help illustrate the difference between the latest “QE” and the earlier programs, we present two charts. The first chart is from Fullermoney.com and shows the spread between the yields on standard 10-year T-Notes and “inflation-protected” 10-year T-Notes (10-year TIPS). We call this yield spread the “Expected CPI” because it reflects the market’s expectations of how the CPI will change over the years ahead. In a nutshell, it is an indicator of inflation expectations. Notice that when the earlier QE programs were initiated the Expected CPI had either just fallen to a 12-month low (in the case of QE2) or just plummeted to a multi-year low (in the cases of QE1.1 and QE1.2), but that the latest program is kicking off with the Expected CPI having just risen to near a multi-year high. The second chart shows that when the earlier programs were initiated the S&P500 Index was ‘oversold’ and either near a 12-month low or long-term low. 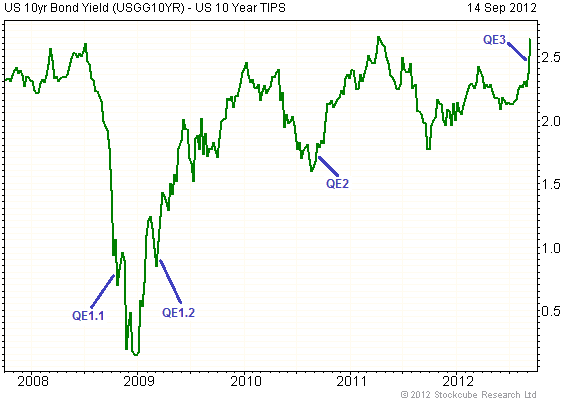 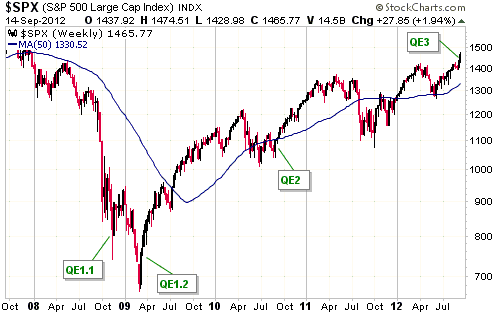 This is so extraordinary that we have to ask, in all seriousness: what were they smoking at last week’s FOMC meeting?

They probably weren’t smoking anything. It’s clear that Ben Bernanke and most other members of the FOMC truly believe that the economy can be strengthened, and a sustainable improvement in the labour market brought about, by counterfeiting money and manipulating interest rates. The root of the problem is unwavering commitment to bad economic theory, so that when the economy doesn’t respond as expected to a certain dosage a higher dosage is automatically considered appropriate. It never occurs to the good doctors that they have their diagnosis completely wrong. How could it when they are, in effect, astronomers trying to make sense of the planetary movements based on the theory that everything revolves around the Earth.

The bottom line is that when this latest program doesn’t achieve the intended results, it won’t be perceived by the Fed as a failure of “monetary accommodation”. It will, instead, be perceived as a failure due to insufficient monetary accommodation and therefore as a reason for an even higher dose of the same bogus remedy. This process is likely to continue until price inflation is widely perceived as a major problem.

The process outlined above was well underway prior to last week, but last week’s Fed decision marks a material acceleration. This is bullish for gold and very bearish for the US economy.