It has been a 1.5-2 year sideways affair for the precious metals (PM), depending on whether you look at silver (peak in April of 2011) or Gold (peak in August of 2011). PM stocks, on the other hand, have done quite a bit worse than go sideways. While the more conservative Gold has only fallen a maximum of 20% from its August of 2011 highs, the more volatile silver and senior PM stock indices (e.g., XAU, HUI, GDX) have both fallen close to 50%. The junior PM stock sector has been decimated, with the GLDX ETF, as a representation of the very small cap/explorer sector having fallen almost 75% over the past 2 years.

One of the funny things about asset price declines is that they are met with the opposite emotional reaction of what is healthy. In other words, people should get more bullish as asset prices decline in an inflationary world, and yet the opposite happens. So, while Gold and silver are approaching the low end of their recent trading ranges, sentiment and trader positioning are at extreme bearish levels, just as they were last summer.

I am not a “pure” chartist or technical analyst when it comes to asset prices, but I think price charts tell a fundamental story rather well. Investing and speculating are risky ventures, to be sure, but we live in an era of global anchorless paper currencies. This means that the fruits of one’s labor cannot be buried under a mattress using the official medium of exchange, as these scraps of paper (i.e. currency units) received for that labor are being thrown into the air by our masters at a pace that would make even rappers blush.

Though I thought last summer’s lows in the PM sector would be enough to halt the correction and start a new cyclical bull market, one more vicious whoosh lower in the PM sector has caused all but the hard core Gold bulls to abandon the barbarous relics and the firms that waste their time digging treasure out of the ground. After all, treasure can be printed by governments and central bankstaz with a few simple key strokes, so who needs shiny pieces of metal?

In reality, we have likely just completed the 1987 crash equivalent in the PM sector when it comes to relative valuations of common stocks versus Gold. The current “Dow to Gold” ratio move has gone on much longer than I anticipated, to be sure. But it is clear to me that we are in no way positioned for a shift of the secular tides at this juncture. Here is a chart of the “Gold to S&P 500” ratio back around the time of the 1987 crash in common stocks using a weekly log scale chart: 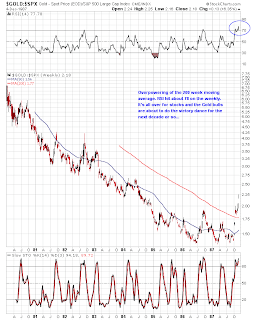 Of course, the Gold bulls may have been a little premature in their celebration back then as this next chart shows: 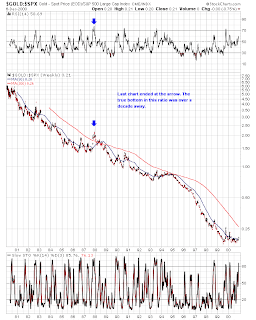 And currently, we have the paperbugs rejoicing giddily in the streets as counterfeiting enormous amounts of money has propped up financial assets to the point where it seems as though Gold is once again irrelevant when compared to common stocks using the “S&P 500 to Gold” ratio: Keeping the biggest of “big picture” perspectives in mind, here is the“Dow to Gold” ratio chart since 1980: 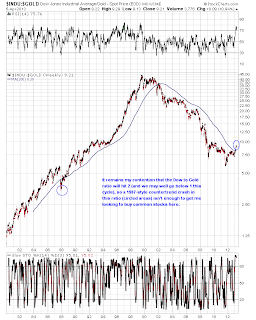 Now, I don’t expect it will take another decade to get back to 1980-type levels in this ratio, but I’m prepared to keep riding the Golden bull that long if that’s what it takes. The big money is made by sitting tight and holding on during a big bull market. Those who held common stocks thru the 1987 crash certainly didn’t regret it for long. Meanwhile, using silver as a more volatile proxy for the Gold bull market, it seems as though we may be at the end of a big 4th wave-type correction that suggests a mania phase dead ahead: 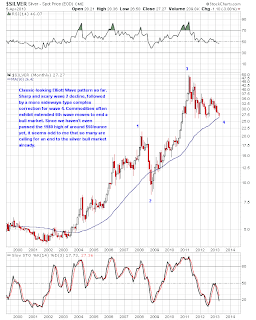 If you accept this Elliott Wave labeling (not saying it is correct – this is just an opinion), it would suggest that the first wave resulted in a roughly 5.3 fold gain and the third wave roughly a 5.9 fold gain. Thus, since the first and third waves are roughly of equal magnitude, the fifth (and final) wave higher is likely to be of the extended variety and thus perhaps a 9-11 fold gain is coming. This would mean a peak for silver in the $200-$300 USD per ounce range. To anyone who thinks this is an outrageous number, I would ask: what do you think of one quadrillion as a number tracking the amount of outstanding financial derivative instruments in existence or one trillion dollars being the annual deficit of the world’s current largest single country economy (i.e. USA). As last week’s policy announcement from the Bank of Japan proved, there is no limit to the insanity induced by drinking the collective Kool Aid.

And oh, the hated Gold stocks. Using the XAU Mining Index as a proxy for the senior Gold miners, we can see that 30 years of price history tells us when to get excited about the Gold stocks and that time is now. Instead of greed, there is only fear, loathing and/or disinterest: 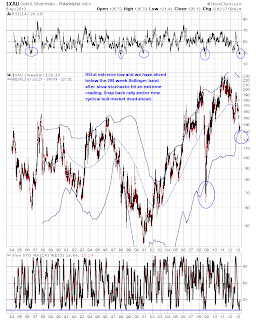 This is a juicy set up for a trade, if nothing more. I think it will be much, much more. Much as in the last cycle (i.e. 2003-2008), it may well be another commodity price spike that derails the current “Goldilocks” scenario. I think Gold and silver are set to lead such a spike as business conditions continue to deteriorate globally. Meanwhile, the futures COT (commitment of traders) report indicates unusually skewed bearishness for all but the commercial traders (large banks like JP Morgan), who are now as bullish on silver as they ever seem to get (chart below stolen from Software North): 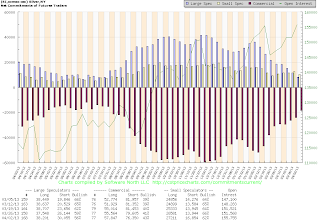 This is a potentially explosive situation that strongly favors a resolution in the PM bulls’ favor. I don’t think there has been a reading of greater than 45% bullish for the commercial traders in the past 10 years, and they are now at 43%. The momentum-chasing hedge funds are piling on the shorts here right as we hit trading range support. With an expanding open interest (rather than the usual decline into a low), an explosive short covering rally could occur with the slightest hint of a bottom (such as, say, with the action to end last week?).

If you would like some help in trying to trade the precious metals and PM stocks, I offer a low-cost subscription service (one month trial is only $15). If not, keep your physical metal safe and outside the banking system until the Dow to Gold ratio hits 2 (and we may well go below 1 this cycle). In other words, don’t get Cyprus’d!

Is Panic Selling Marking A Bear Market Bottom In Precious Metals and The Miners?