This material is an excerpt from a premium update

Last week we wrote about Silver so this week we decided to provide an update on Gold. In looking at the price action and sentiment indicators we find that Gold is once again ripe for what is becoming an annual seasonal breakout. Gold has broken to a new all-time high in three of the past four years and presently, we are anticipating another breakout.

Gold is entering the third month of a consolidation that has range from $1475 to $1560. This tight consolidation is looking like a bullish flag, which is a continuation pattern. It “continues” the previous trend, which of course was bullish. The flag projects to $1825. We have a near-term Fibonacci projection of $1742. Finally, there is a long-term strong Fibonacci target of roughly $1820. 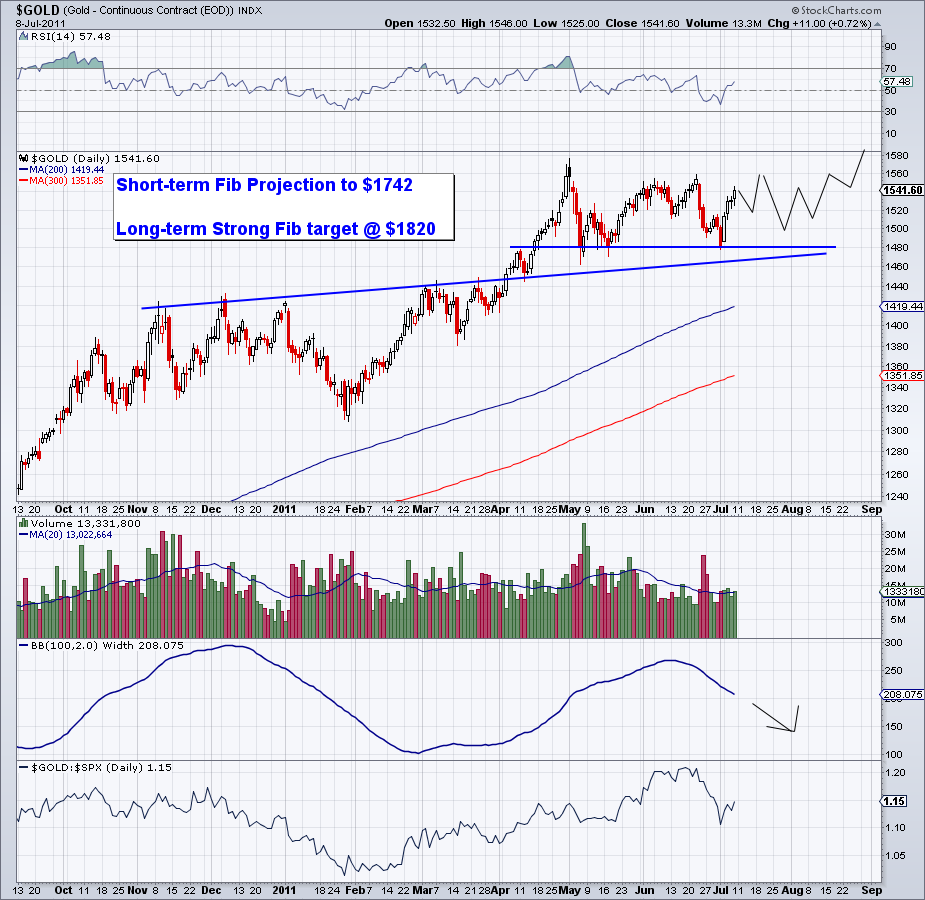 The Commitment of Traders data (source: timingcharts.com) for Gold remains very encouraging. Commercial hedgers are short 202K contracts (as of last Tuesday). This is well below the October 2010 high of about 300K contracts short. Aside from one or two weeks, their current short position is at a two-year low. Furthermore, open interest is well below the recent high and in fact fairly close to a one-year low. The COT data indicates a very low amount of speculation in the Gold market. Certainly we will need to see that pickup in order for Gold to breakout. 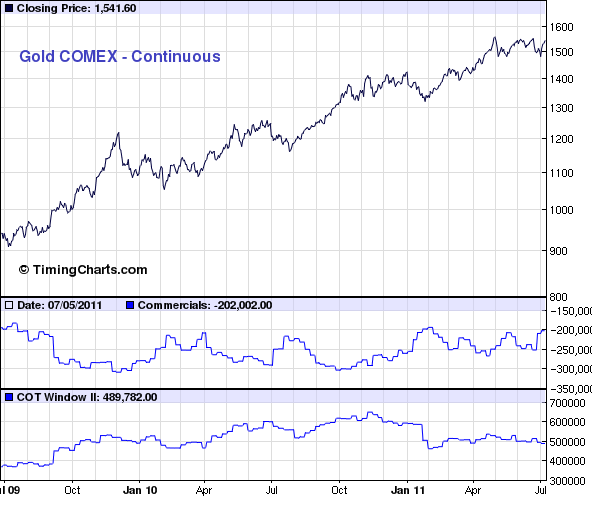 Note the public opinion from sentimentrader.com. It is only 57% bulls. While not so low we have to view it in the context of a strong bull market. It is a two-year low.

Furthermore, as usual, none of the clowns…I mean Wall Street analysts have an ounce of bullishness regarding Gold. The following is from the Erste Group’s July Gold Report:

According to a survey by Barclays not a single one of the 100 institutional investors expects gold to close 2011 among the top performers. On the other hand, the precious metal received the second-highest number of votes – behind natural gas – as expected worst performer of 2011. The 22 gold analysts covered by Bloomberg do not come across as very enthusiastic either, as the following screenshot illustrates. The consensus expects a sharp decline in the gold price from 2012 onwards. The median price targets were USD 1,450 (2011), USD 1,400 (2012), USD 1,231 (2013), and USD 1,159 (2014).

There you have it. Price action is bullish and sentiment indicators are quite supportive of the bullish cause. We didn’t discuss how the mining shares actually bottomed prior to the latest bottom in the metals. Several months back the mining shares peaked before the metals. Now we see the reverse. Such action is typical of turning points. Perhaps it is too good to be true but until proven otherwise, we have to anticipate another seasonal breakout in Gold.

Not only is Gold set to breakout but this could finally be the breakout that accelerates this bull market into the beginnings of a bubble. Folks, we are 12 years into this bull market and based on a typical bull market, the returns over the next few years will accelerate relative to the previous few years. If you’d like to learn about our premium service then visit here for more information.