The calls grow louder and louder each trading day if one listens to the financial news. And I am starting to realize they may be right. Gold could be in a bubble. In fact, this is why I invested in Gold in the first place years ago. It was because I thought Gold would be the next bubble and would make me a lot of money.

The recent characteristics of Gold do suggest the possibility that it is now in a bubble. The funny thing is, the bubble callers have apparently forgotten how bubble dynamics work in modern fiat markets. I am willing to accept that Gold is in a bubble. I don’t fear it and I’m not trying to fight it.

But before everyone gets all scared and sells all their Gold and Gold mining stocks, let’s look at another similar bubble from recent history, shall we? I am going to block out the name and dates of this bubble, but I’ll leave the prices and momentum indicators in place on the following charts. Here’s the bubble in all its glory on a weekly linear scale chart: 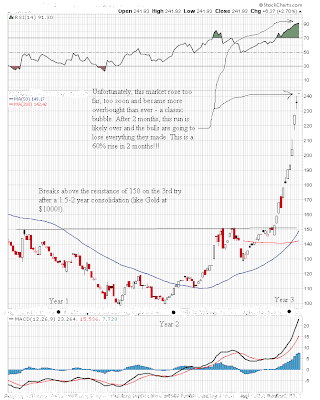 And here’s what happened next, unfortunately for the crazy tinfoil hat-wearing Gold bugs holding on to a piece of shiny metal that is about to become worthless: 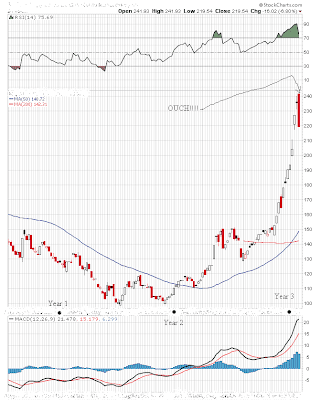 And you can only imagine the carnage that comes next after a burst bubble that rose 60% in only 2 months after a 1.5-2 year consolidation: 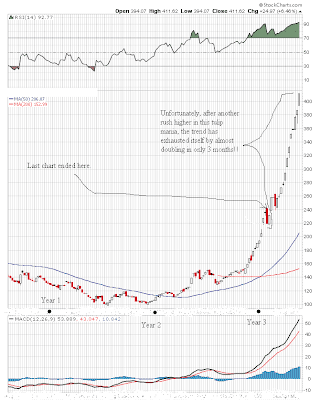 Then, the inevitable fall: 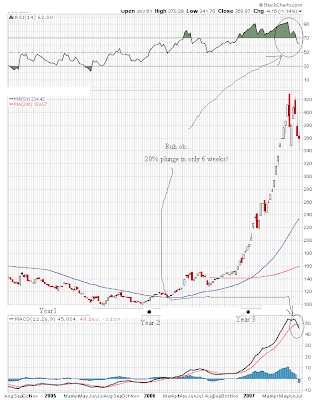 So, bubbles can’t last forever but they can move higher than you thought. Here’s what the final collapse looked like: 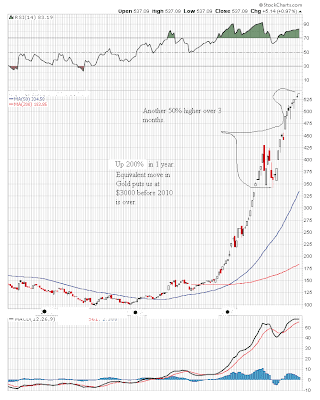 Now, I’ll grant you that I don’t expect Gold to act like a penny stock or anything. I mean the charts I showed above don’t track anything mainstream and Gold is a major market. In case you haven’t guessed it yet, here’s the chart with the name and dates revealed showing what came next: 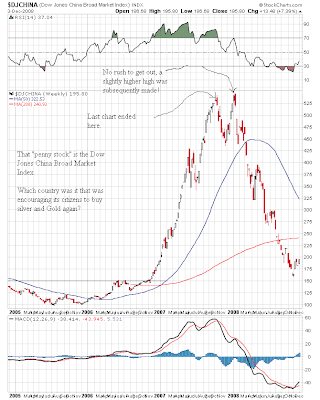 This is why calling Gold a bubble should not discourage you from getting on board. What else are you going to do – invest in the Dow Jones or real estate?! I’m not pumping Gold, I already own it and I know what its worth. Mine ain’t for sale at current prices. But if this is a bubble, we’re in the first leg! What the top callers and bubble callers don’t get is that a bubble in financial markets lasts more than 2 months! We spent 1.5 years trying to get through the psychologically important 1000 level. Now that we’ve broken through, it would take at least 9-12 months for a parabolic thrust to play out. Oil took 9 months to make its final thrust after the breakout over $80 in 2007. We’ve gone 20% in 2 months. In bubble dynamics, that is barely qualified to represent the 1st inning!

People don’t have the right sense of scale on how far and long these things can last if we’re talking about a final parabolic run in a secular bull market that has gone on for almost 10 years, mostly under the radar. Once on the radar, a major asset class like Gold takes months to whip the public into enough of a frenzy to buy into it fully. We are nowhere a mania phase at this time. Not even close. There’s time (2 months is too short for a bubble to form and burst) and there’s price (name one bubble in the fiat era that flamed out with only a 20% move after breaking out above long-term resistance – this would be a failed break out, not a bubble!).

Gold has strong fundamentals that back the current move. Those who say otherwise don’t understand Gold and won’t until its too late. That’s OK. This bull market, like all before it, wants to take along as few riders as possible. The wall of worry is intact despite the short-term froth. The mainstream doesn’t get it and by the time they do, the bull market will be just about over (but not quite over, as heavy public participation is a part of the final thrust higher). Gold will get ahead of its fundamentals and become overvalued. That’s $1000/oz or more above the current price level, so don’t worry about this yet.

I am not saying Gold has entered a bubble stage. I have no idea, as the current move is rather routine for Gold if one even casually peruses the past 2 intermediate term bull moves of its decade long bull market (i.e. 50-70% moves higher over 6-9 months). As far as I’m concerned, the jury is still out. But if we’re going to have a bubble in anything right now, mark my words: IT WILL BE GOLD AND PRECIOUS METALS. There are no other candidates. Period. It’s either Gold or nothing.

So, yes, we could be in a bubble for Gold. That’s a good thing if you own Gold or Gold stocks. Now, where it gets tricky is in looking for pullbacks in such a market. It is never prudent to chase markets higher on momentum. But if you want in and we have a quick one or two week plunge of 10% in the Gold price, will you be ready to buy Gold or your favorite Gold stock/index or will you be afraid? Because when the pullback occurs (and one will, of course), the paperbugs are going to be out in force screaming “I told you so” and they will be very, very wrong.

So the next time another Gold basher or ignorant paperbug calls Gold a bubble, remember to thank him or her if you are a Gold investor. Because that means we are going to Gold $2000 and likely far beyond. Fine by me!

And whether or not Gold gets into a bubble situation, I still believe the Dow to Gold ratio is a valid construct for knowing when we are near the top in the Gold price. Gold at $3,000 and Dow 6,000 would do the trick to get to my minimum target ratio of 2 and it wouldn’t take much for both of these things to happen simultaneously (and this is the optimistic paperbug scenario, as the Dow to Gold ratio may well go below 1 this cycle given the rampant excesses of the prior secular bull market in paper/financial assets). Until the Dow to Gold ratio approaches 2 (we closed the day at 8.6), this potential Gold bubble (versus routine secular bull market) has a LONG, LONG way to go.

If you think the charts I showed in this piece demonstrate that Chinese investors can bid up their stock markets to nose bleed levels, just wait until they catch Gold fever.

Owning GLD can be Hazardous to Your Wealth