The Gold market is set to catch fire. Every desperate smack down in the Gold price by the bankstaz who are short more metal than they can deliver is needed only because there is so much buying pressure in the market and they know how out of hand the next bull run could get.

News of Soros and Paulson buying $175 million of NovaGold (ticker: NG) equity is very bullish. The stock popped today on the news, of course. These boys certainly aren’t afraid to put their clients’ (and their own) money where their mouth is.

News of credit default swaps on U.S. Debt PAYABLE IN GOLD from a reliable source is insane. Who owns the Gold and is also willing to risk it on such a dangerous trade? So many interesting implications of such contracts if they exist and are being traded. The fact that interest in such a trade exists among “insiders” shows how dangerous things are under the surface.

The U.S. Dollar is topping out just as we are entering a very strong seasonal period for Gold and Gold stocks (mid-March to mid-May).

Dips are for buying. I bought some Yamana Mining (ticker: AUY) and GDX calls this morning on weakness to complement my GDXJ calls. I like how beaten up Yamana looks. Here’s a 6 month daily candlestick chart of the action in AUY thru part of today with a plot of the AUY:GDX ratio below to show how weak Yamana has been relative to the senior mining GDX index: 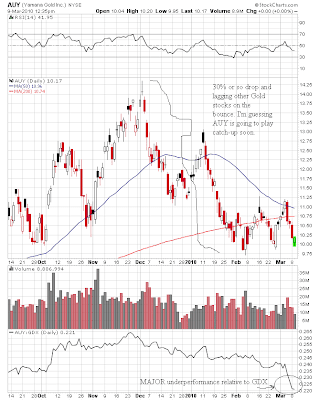 I have really learned to love such “reversion to the mean” trades. Since Gold stocks are so volatile, such trades have a fairly good success rate. Wish me luck…

I remain as bullish as ever and I remain as biased as ever. I still believe Gold will be making new highs before the spring is over and that Gold stocks will outperform the metal during the imminent spring run.