The Fed rate hike has come and gone while the precious metals sector has continued to whipsaw traders day after day. The initial reaction was very positive. However, that completely reversed course on Thursday with Gold threatening to move to a new low and gold miners threatening to test recent support. Friday’s strength continued the whipsaw pattern. In any event, the evidence continues to argue in favor of a rebound for the miners into Q1 2016.

We have not presented this chart publicly until now. It plots GDX and the difference between its premium or discount to NAV. We plot the volatility of that data at the bottom of the chart. Note that spikes in the data or sharp increases in its volatility have coincided with important lows in GDX. As GDX has tried to base in recent months the volatility in its premium or discount to NAV has reached the highest levels since the 2008 low. 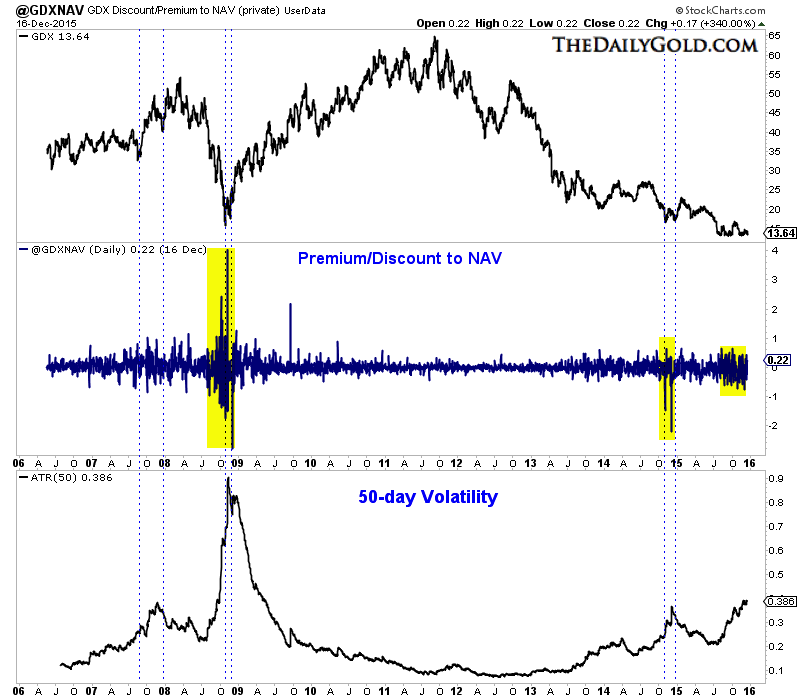 While the next chart is several weeks old it remains relevant and supportive of the bullish case. The chart is from sentimentrader.com and highlights GDX’s median put-call ratio. The data is from Bloomberg. The median put-call ratio recently touched its highest level in two years. Note that a spike in the put call ratio preceded the end of year rallies in each of the past two years. No single chart or two can guarantee a rebound but in considering various history, the current bearish sentiment in the sector and the recent relative strength from the gold miners, we think the miners are in position for a rebound. It may not be imminent because Gold could break below $1040/oz and test $1000/oz. That would coincide with weakness in the gold miners but create the setup for a larger rally in January. As we navigate the end of this bear market, consider learning more about our premium service including our favorite junior miners which we expect to outperform in 2016.