I can’t stop thinking about the set-up here to slaughter U.S. Dollar bulls. Look at this COT (Commitment of Traders) chart for the U.S. Dollar Index, showing 15 years of price action as the major plot and the net position of “Commercial” traders of the past 15 years on the lower plot: 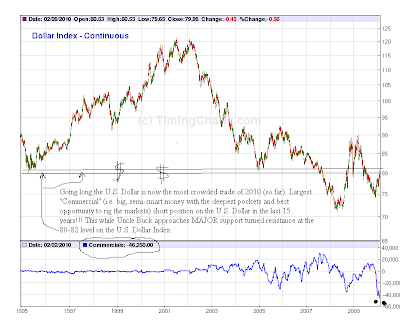 I think the overleveraged U.S. Dollar bulls are being led to at least a short-term slaughter here. We are approaching MAJOR resistance in the 80-82 range for the U.S. Dollar Index at a time when the people with the money and power to rig short-term market moves have THEIR LARGEST OVERT LEVERAGED SHORT POSITION ON THE U.S. DOLLAR IN 15 YEARS!

Notice the financial media spewing garbage about the PIGS in Europe bringing down the house. Watch as the news turns back to the problems in the U.S. right on cue over the next few weeks. People will scramble back into the Euro as everyone realizes it is oversold relative to the U.S. Dollar given the problems in California, New York and Illinois. All paper is suspect. The currency swings will get wilder as the international monetary system continues to break down. Gold will continue to get caught up in this volatility but will come out on top, ahead of all debt-based paper currencies as the dust attempts to settle over the next few years.

The deflationary forces in the economy are strong, which is U.S. Dollar supportive. However, the “commercial” bankstaz would rape kittens for a few extra bucks and will take the Dollar down to protect and make money off their shorts over the short term. Trust me, they can (and almost certainly will) do it.