Lately we’ve been writing about the negative correlation between the equity market and the precious metals market. This phenomenon has been in place since summer 2011 and has re emerged in the past few months. Since November 23, the S&P 500 is up 8% while the gold shares are down 14%, Silver has lost 11% and Gold 7%. For those who have studied history this should not come as a total surprise. From 1972 to 1977 and November 2000 to July 2002, precious metals and the equity market trended in opposite directions. We’ve postulated that precious metals and the mining shares won’t begin a new bull phase until the cyclical bull market in US equities ends. We don’t expect that to happen immediately but there are some important signals beneath the surface (with the safe-havens) that we should direct our attention to.

First, let’s take a look at the recent activity in a number of markets. From top to bottom we plot Silver, Gold, GDX, TLT and the US Dollar. The first three markets have been in a downtrend since the end of September. Meanwhile, TLT and the buck began their downtrends in the middle of November. It appears that these markets have been tightly connected since the end of November. That is the bigger picture. The short-term term picture shows the US$ potentially breaking out and bonds not breaking to a new low. 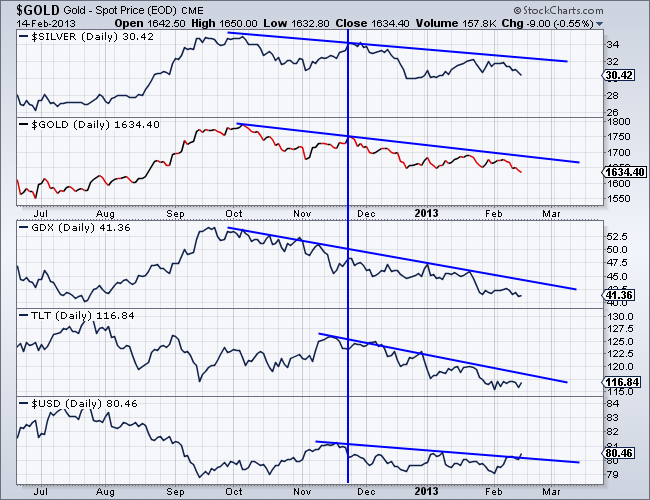 Meanwhile, we should take note of the action in some other markets since late November. Both emerging markets (EEM) and the S&P 500 have advanced, but EEM is slowing down. Commodities failed to make a new high even as the US$ made a marginal low. As we can see, the inverse of the buck is threatening to breakdown and realign with commodities and CEF, a fund which is half Gold and half Silver. The rally since November is now seeing a negative divergence as emerging markets have not made a new high and the US Dollar could be breaking out. 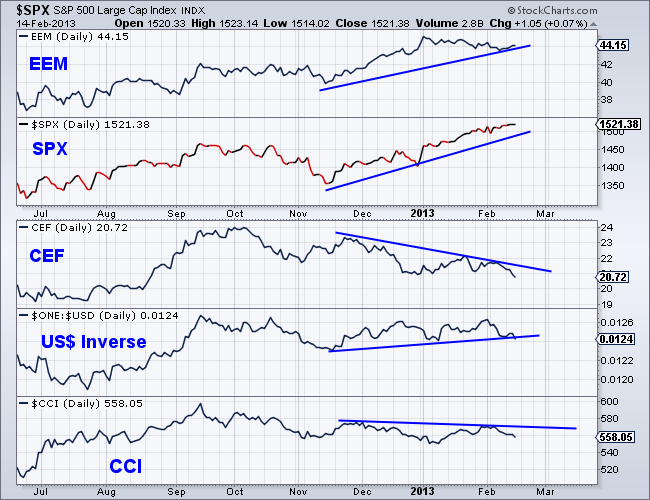 The bottom line is the action in precious metals, commodities and the US$ is signaling a warning for the equity market. The bond market needs to confirm this warning and if it does it could be the catalyst for a sell-off in equities. Keep in mind, the S&P 500 is approaching strong long-term resistance while in a state of euphoric sentiment. If you don’t believe that, check the recent sentiment surveys and ignore those who don’t provide hard data. By the way, public opinion on bonds (from sentimentrader.com), is only 14% bulls! Sounds like we should sell bonds and buy stocks, right?

Meanwhile, the precious metals appear likely to test major support in the coming days and weeks. There will be some more pain but things are setting up perfectly for the next cyclical bull market. Gold is positioning itself contrary to risk-on assets. It has detached from the stock market and that is a good thing. There will likely be a transition period as precious metals find a bottom and the equity market reaches its peak. For now, look to buy precious metals if they reach an extreme oversold condition next week. As for the gold stocks, if you’d be interested in professional guidance in uncovering the producers and explorers poised for big gains then we invite you to learn more about our service.