It’s About Gold, Not Inflation or Deflation

Gold’s getting ready to have a short-term correction if it didn’t start today. Trying to game short-term corrections in a raging bull market is a fool’s game and there’s no reason to do it. Simply buy on sharp pullbacks and hold on. It’s not rocket science for those with a time horizon of more than a few days. One simple 10 year monthly log-scale chart can tell you where the current secular bull market is: 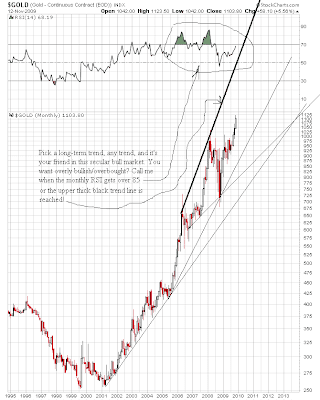 Anyone who has studied prior secular bull markets knows that a 4 fold gain over ten years is not a bubble and is not anywhere a secular top, but “bubble” calls are everywhere in the mainstream financial community regarding Gold. First, they don’t see it coming and say it can never happen and then they call “bubble” the second it does! I love it because Gold is still climbing a wall of worry. Yes, the short-term speculative froth is a little high, but long term (I am not a day trader), Gold has a long way to go regardless of what paperbugs think.

There is too much confusion regarding Gold and its role in society. This confusion, of course, is not by accident in a paper currency regime. The deflation versus inflation debate, it seems to me, has become the democrat versus republican debate in my opinion. In other words, it is a distraction and unimportant to serious Gold investors. Those who thought a democrat (i.e. Obama) would fix our country’s structural problems and stop the senseless warfare against innocent third world nations hopefully now understand and will learn from their naive mistake.

Let me ask you some important philosophical questions:

Why did Gold back currencies or act as a currency in multiple previous historical periods (i.e. what was the rationale) over the past few thousand years and why did Nixon sever the U.S. Dollar’s final link to Gold in 1971?

Why was Gold ownership made illegal for citizens in the United States from the early 1930s thru the early 1970s?

The answer to these questions is part of the answer to why Gold will continue to appreciate in price. This is despite the fact that you can’t eat Gold, the world is not coming to an end, Gold pays no interest, Gold has no growth prospects, Gold pays no dividends and you can’t spend Gold at Wal-Mart. Yes, Gold will continue to outperform general stocks, whether you think it’s appropriate or not.

Is the secret to Gold the U.S. Dollar Index? Not if recent history is a guide: 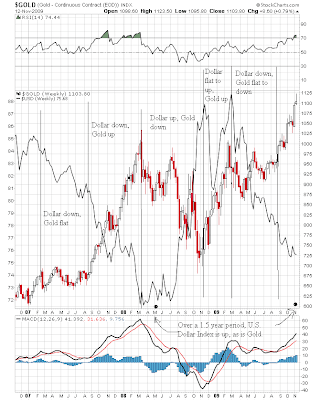 Is Gold a lousy investment during deflation? Not if recent history is a guide: 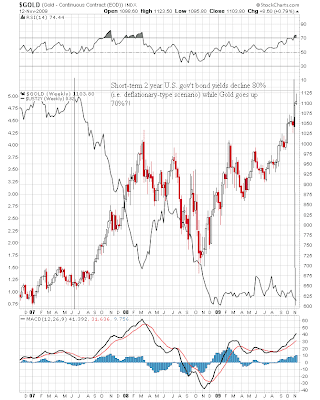 Is Gold simply a way to bet on a stock market decline or rise? Who knows based on recent history: 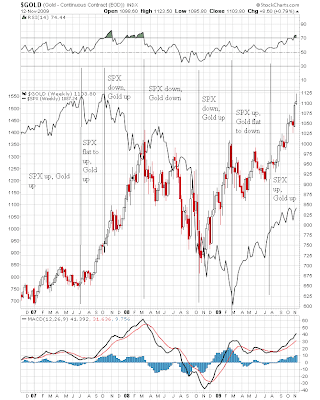 The simple truth is raw and not so pretty: Gold is a good investment when people lose trust in their society and its power structure. Think of the shift in trust over the past few years when it comes to bankers, Wall Street, the federal reserve (not federal, but rather a for-profit corporation given a no-bid contract to counterfeit money), and the federal government.

Gold is a bet that the “powers that be” are going to screw things up even worse than they already have/they already are. Does that really sound like a high risk bet to you? If it does, go back to watching CNBC and see what Cramer has to say (I hear he’s pushing Gold stocks these days, which naturally makes me nervous but one can’t have a mania phase without widespread public participation…). Have you not read about the real estate crash that is far from over, the insolvency of the entire U.S. banking system, the global coalition forming to dethrone the U.S. Dollar as the world’s reserve currency, the now legendary level of fraud on Wall Street and at the highest levels of government, and the lies behind the “wars” on terror, drugs, and freedom in the United States?

Once you understand these things, do you really want to keep your savings in a crappy 401(k) where you get to choose between “blue chip growth,” “aggressive growth,” or “lifestyle 2020”? Now look, I am not saying stocks can’t do well if confidence in the U.S. Dollar starts to plummet at an accelerating rate. Stocks are one of many hedges against inflation. But Gold is the asset class in a strong secular bull market. Gold is leading the Dow and the S&P 500 over the past decade, not the other way around. This trend will continue until we get close to a point where one ounce of Gold is equivalent in price to the Dow Jones Industrial Average.

If you don’t believe me, read what Martin Armstrong has to say (if you keep telling the truth Marty, they’re never going to let you out of jail!):