Public and private debt will be printed up out of thin air and used to replace the bad private and public debt plaguing the financial world. As the insanity progresses, more and more will turn to Gold. Whether we are headed for an implosion that is deflationary, inflationary, or both, confidence in our current financial system will become mortally wounded. This is why the Dow to Gold ratio will reach 2 and may even go below 1 this cycle. It’s a confidence cycle as well as an economic cycle.

More bailouts are coming. More private debt will be switched to sovereign/public debt. If sovereigns can’t take on more debt, which they obviously and unfortunately can, then super-sovereigns like the IMF and European Union central bank will mint new debt and pile more debt on top of old. This will continue ad nauseam with several blips along the way.

Because currency devaluations are difficult to achieve for governments that are all fighting to debase against each other, Gold will be the relief valve. Currencies will be devalued relative to Gold. In the 1930s, to fight the deflationary economic collapse brought on by a popped debt bubble, countries just left the Gold standard. The U.S. devalued its Gold standard into a watered-down, quasi-Gold standard and thus became the least ugly currency since it didn’t entirely abandon Gold.

In the current ridiculous anchorless paper system, devaluations against Gold are a little less obvious because there are no longer any Gold standard promises to break. But without a doubt, further devaluations of paper debt tickets relative to Gold will continue as they have over the past 9 years. Governments will become a friend of Gold. It may seem hard to believe for Gold bulls, but central banks becoming net buyers of Gold over this past year is only the first step.

Ben Bernanke is a student of the last economic depression and has seen with his own eyes the inflationary jolt a currency devaluation against Gold can have. Gold no longer needs to be confiscated to be re-valued, since the sheeple have bought into the paper fiat world hook, line and sinker. Simply swap out paper Gold tickets (i.e. futures contracts, the GLD ETF, Gold certificates from pooled accounts) for debt tickets (i.e. paper currency units) and pay the paper Gold ticket holders a premium so they feel good about the deal because they make a profit. Now that you are done shorting Gold and silver and you hold a large position in actual physical metal, talk the precious metals up every day on CNBC and whip the herd into a frenzy. Never mind those kooky Gold and silver bugs that actually hold physical metal in the U.S., as they are too small a percentage of the population to worry about and they tend to be heavily armed.

Think about fiat masters buying instead of selling Gold. They are sending a not-so-subtle signal that the number of debt tickets (i.e. currency units) required to purchase Gold is going to go higher. This is not a one-time phenomenon. The Chinese, who seem to be able to muster a longer-term view than many other advanced economies, are encouraging their citizens to buy Gold and silver. This is unprecedented in a “modern” paper fiat world where Gold is ridiculed and denigrated on a continuous basis.

But Gold won’t seem so ridiculous if desperate inflationary policies fail to take root and the next leg of the financial asset price decline gets into gear. For inflation benefits the bankers as long as it doesn’t morph into a hyperinflation. Deflation is a scary beast for bankstaz, so they fight it tooth and nail with the only tool they have: more money/debt creation. What benefits the bankers will become policy, as governments and the majority of people who vote for them are more than happy to take on more sovereign debt. Since governments have no intention of ever paying the money back, why can’t they just keep borrowing more and more despite the detrimental effect this will have? Of course, there is a mathematical limit in theory to what can be done, but I think we’re going to test those limits this cycle.

A rising Gold price has been traditionally seen as a threat to the credibility of the current U.S. Dollar regime. But when inflation is desperately needed by those seeking to maintain nominal asset prices and/or their elected offices, Gold will become a friend. And even if it does not become a friend to those with their dirty little fingers reaching for the magic debt printing presses, Gold will become a safe haven of choice for an increasing percentage of the global herd. It doesn’t take a genius to recognize an economic and monetary train gone off the tracks. Several thousand years of accumulated human experience and Gold wisdom won’t be cast aside based on a 40 year global fiat experiment. Money has not evolved more over the past 200 years than humans have, trust me.

I am looking for an increasing number of highly publicized large Gold purchases by various central banks. For this is the stage when beggar-thy-neighbor policies will fail, the currency fluctuations will get more violent, and Gold will be seen as an ideal solution to achieve massive currency devaluation and stave off the deflationary debt collapse from completing. Whether it works or not remains to be seen, but Gold will enjoy large gains from current levels because of these pending “solutions” and the loss of confidence that will accompany them. This is not a happy message, but it can be a prosperous one if you are prepared.

As strange as it seems, the world’s central bank pushers and their junkie government customers are going to become big Gold bulls before this mess is over. The following 1 year chart of the Greek stock market is a reminder of how fast the tide can turn in the current environment: 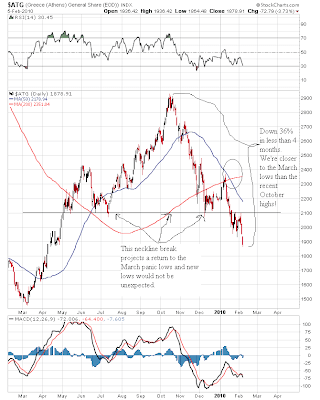 If you think the S&P 500 can’t do the same thing, you are living in a fantasy world. Gold will not collapse. Gold didn’t collapse in the Great Panic of 2008 (correction, yes, collapse no) and was back at $1000/ounce by February ’09, at a time when stocks were in free-fall mode. This relative strength is but a taste of what’s to come. Until the Dow to Gold ratio hits 2 or less, general stocks will continue to be a lousy investment. Buying Gold now while it is in a bottoming process is a way to play it safe and ride out the storm. Our first lost decade in stocks almost over. Don’t get caught in the second lost decade that is dead ahead with a “buy and hold” general stock strategy.

Win-Win Scenario for the Dollar