Silver is more volatile than Gold and riskier. It also provides a more substantial upside potential. Classic case of increasing risk to potentially increase reward. I hold some physical silver, but hold much more Gold. Silver can sometimes lag Gold substantially for decent periods of time and then rapidly play catch up. Because I believe we are on the cusp of an explosive run higher in all things precious and metal, I am growing more interested in looking at silver. See yesterday’s post regarding the CEF:$GOLD ratio as well.

Gold miners tend to make big bull runs at the same time as silver, as Gold stocks are riskier than Gold and tend to thrive when speculative spirits are running high, so silver and Gold miners can at times be imperfect proxies for one another. My biggest Gold mining holding right now is the GDXJ junior Gold mining ETF. I use this as a way to help diversify away company-specific risk in the sector, since I am not a mining expert, and to get exposure to a basket of smaller cap Gold mining stocks. I use leverage on a portion of my GDXJ holdings via call options. I also hold several smaller Gold miners outright that may or may not be a part of GDXJ’s holdings.

My physical metal is not for sale at anywhere near current prices, but I trade the miners, I don’t hold them. I may regret this down the road, but I continue to look to trade most of my mining stocks rather than hold them. Anyway, I have been bullish on silver for a while now, after being erroneously bearish on silver last summer and early fall. The impressive breakout in Gold in the fall changed my mind. I thought deflation would get a chance to maul silver a little more, but now I am not so sure. Several trillion dollars in monopoly money debt can perhaps buy a little more time than I thought…

Those who claim that silver lagging Gold means the move in Gold is fake-out I think are wrong. I would like to show them exactly how wrong they may be.

Witness a portion of the 1970s Gold run (chart stolen from sharelynx.com and defiled with my scribbling): 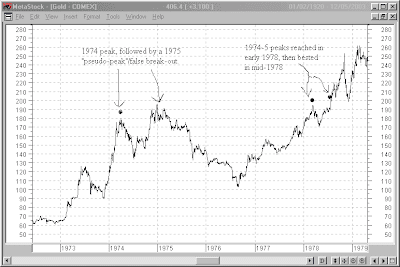 And here’s what happened with silver in the 1970s (also courtesy of chartsrus.com): 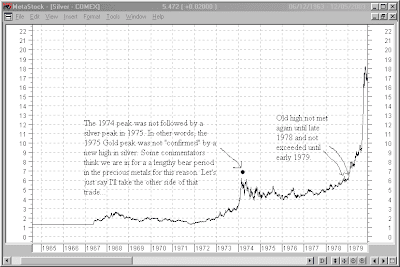 Now, most who have studied the last precious metals bull market know what happened next: Gold went up 3-4 times from 1979 to 1980 and silver went up 9-10 fold, both reaching their peaks in early 1980. Now I am not saying we are on the threshold of “the” final move in this secular bull market. But I do believe silver may surprise many here, explode higher and outperform Gold. I wonder what the new uber-bearish Elliott Wave International wave count on silver would be if silver makes new highs this year?

Another example from more recent history can be found in the 2002-2003 time frame. Here’s a daily Gold chart during the period of interest with my comments regarding the similarities to current conditions: 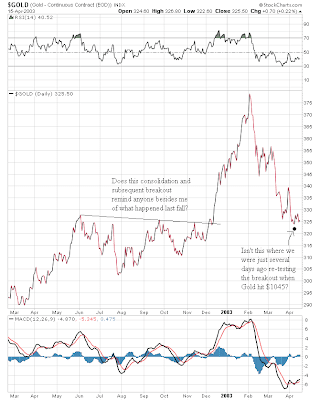 Now, during this time, silver did poorly. Here’s the silver chart from the exact same time frame: 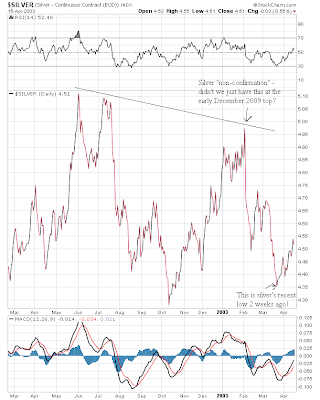 And, of course, my favorite game: “here’s what came next.” First, the Gold price: 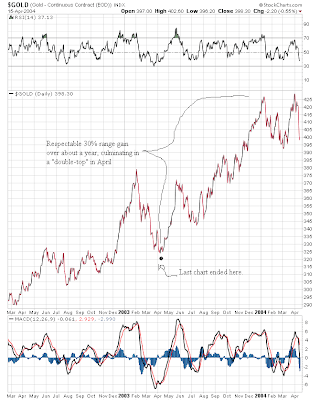 Next, what came next in the silver price over the same period: 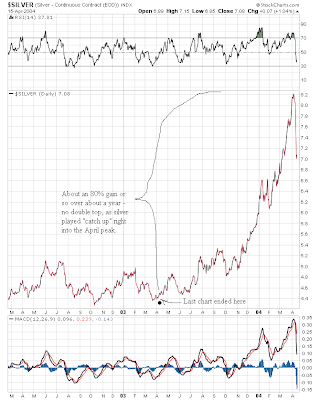 There’s a good chance we are headed for a replay of this 2002-2004 scenario in my opinion. Gold’s movement in this secular bull market has been much more methodical and gradual compared with the 1970s. The reason is simple: Gold has been “managed” this time around. Even Paul Volcker has openly admitted he failed to “control” Gold’s rise in the 1970s and that this was a mistake. This is the lesson learned from the last Gold bull market! Not that paper money is unstable and unfair, not that deficits matter, but that the Gold price should be “managed.” I laugh every time Volcker is trotted out as a messenger for reform and as a voice of “sanity” among the banksta community. Yes, in the land of the blind, I suppose the one-eyed man is king – but give me a break.

This quote of the month from Adrian Douglas (in another great GATA article exposing the market manipulation that is getting worse rather than better in the Gold and silver markets) matches my thoughts precisely:

“If the U.S. government has a budget of $3.8 trillion and supposedly governs a $10 trillion economy, yet five commercial banks control $198 trillion of derivatives, who do you think really runs the country?“

I remain bullish on all things shiny and precious, both for the intermediate term and the longer term.

How We Get Out of a Deflationary Debt Spiral