Certain old market adages just don’t seem to go away and are perpetuated by novice investors who seek to find some meaning in markets and their interrelationships. Mainstream financial commentators are more than happy to repeat and regurgitate such claptrap endlessly, creating “rock solid” market wisdom.

“Dollar Up, Gold Down” or “Dollar Down, Gold Up” is a common one in the Gold investing community. This works until it doesn’t. The funny thing is that THE MOST IMPORTANT BULL RUN IN THE LAST CENTURY FOR GOLD PROVES THIS ISN’T A GOOD WAY TO LOOK AT GOLD! I am not making this up. This is actual market history there for anyone to examine. But most instead steadfastly stick to simple phrases that cannot possibly capture the nuances of the complex human psychology that backs market behaviors.

Here is a chart including the most important and legendary move in Gold that every Gold bug has seen a picture of (stolen from chartsrus.com):

During the 1979 to 1980 parabolic run when Gold more than quadrupled in about a year, do you think the U.S. Dollar collapsed? Well, it obviously went down a lot, but we know it didn’t collapse, right? Here’s the chart of the rapid but not catastrophic collapse in the U.S. Dollar Index from 1978-1980 (again, stolen from chartsrus.com): 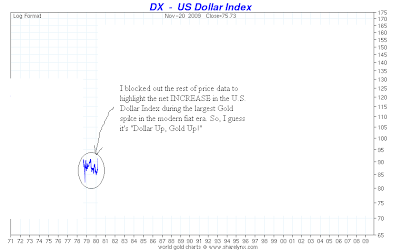 If only markets were so simple that basic phrases describing intermarket relationships could make you rich. Ahhh, we can dream can’t we? So if you really want to get rich in Gold, I guess you should buy Gold when the Dollar is rising.