Something has drastically changed in the silver market. The banks that once controlled the price of silver are now closing positions at a loss. The commercial shorts have begun to bleed money – and when blood spills sharks will circle. Hedge funds and traders that never even thought of silver before will begin to squeeze the shorts. If the big banks don’t quickly regain control of the silver market they may lose it forever.

Anyone following the futures market for silver knows that the large commercial traders, banks such as JPM, always win. That is until now. Let’s look at the history of short selling as it related to silver in the past, what has been occurring recently and what may unfold in the very near future, as follows.

Then
During the bull market in silver that began in 2001, a pattern of trading similar to the “Martingale Betting Strategy” emerged in which 8 trading institutions sold short increasingly larger amounts of contracts into rallies until their sales volumes overwhelmed the market into a freefall. After the freefall they then repurchased those short positions at a profit and the rally process began again. This process of taking money from precious metals investors has been well documented by analysts such as Ted Butler, David Morgan, and others. The strategy was so successful that some futures traders began to front run the banks on their own using tactics such as the COT report and other sentiment indicators. As a result of their actions it has been argued that these large short positions have suppressed the price of silver by a multiple of itself. This may be proven sooner than many expected.

Recently
Over the last 6 weeks all was going according to plan. Silver rallied and the commercial banks shorted an ever larger amount of contracts as the open interest swelled to the point at which most silver analysts were expecting a correction. In the last 2 weeks silver rose by nearly $2 dollars and most were expecting to see an even larger commercial short position reflected in the COT report. Instead, the commercials actually covered 2297 contracts, and bought an additional 989 long contracts during the week of September 28th to October 5th when the price of silver rose by $1. The covering was down at what appeared to be a short term top to many. 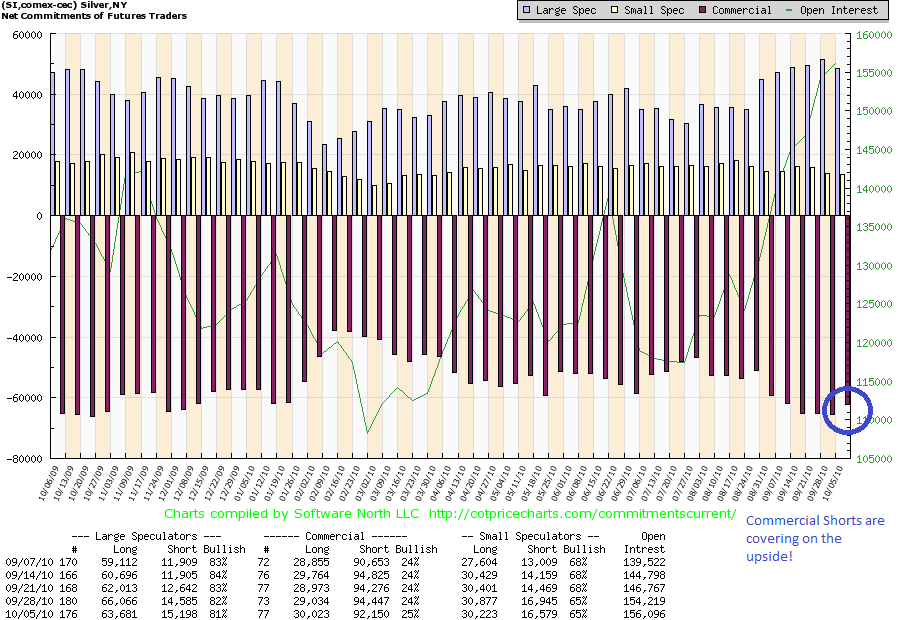 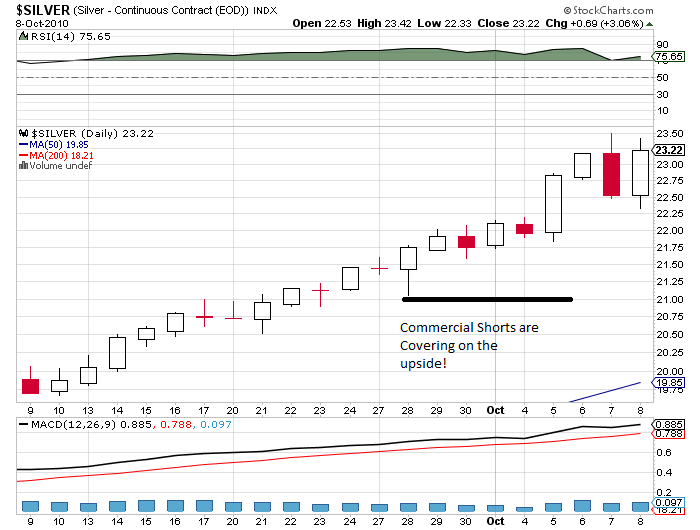 The Near Future
While it can be speculated on how short covering could impact the market, a short squeeze could feed upon itself as it attracts capital. In five trading days of buying a net 3286 contracts the price of silver rose by $1. However the commercial banks are still a net 62,127 contracts short so at that linear rate it would take them 94 trading days to cover with a silver price of roughly $117. The resulting losses would be around $15 billion. Of course markets aren’t linear and after the second or third week of covering traders would begin to purposefully front run and squeeze the commercial shorts so it is unlikely that the positions could be covered that low or if at all.

Conclusion
Unfortunately, those of you who were hoping for a correction to accumulate more silver may not get it here as a price reset may be on the horizon.

Chris Mack is President of Trade Placer (tradeplacer.com) which brings the “Power of Wallstreet on Mainstreet” to its readers and can be contacted at info@tradeplacer.com.
Visit http://www.FinancialArticleSummariesToday.com, “A site/sight for sore eyes and inquisitive minds”,  and www.munKNEE.com, “It’s all about MONEY”,  where you can sign up for their FREE weekly “Top 100 Stock Market, Asset Ratio & Economic Indicators in Review.”