If there is one man in the nation’s capitol who maybe isn’t too unhappy about Treasury Secretary Tim Geithner being in the news today, it’s probably Fed Chairman Ben Bernanke

who delivered a speech titled Monetary Policy and the Housing Bubble over the weekend, a topic that continues to generate a lot of discussion at mid-week, little of it positive. 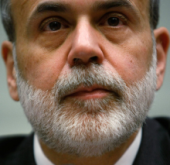 In what clearly appears to be an attempt to work

backwards from a conclusion (based on its contents, a better title for the speech would have been “Monetary Policy was not Responsible for the Housing Bubble”), the Fed chairman demonstrates an incredible lack of understanding about the financial and political world in which he lives and exhibits some disturbing character flaws that have not been on display before to this degree, namely, a dangerous reliance on economic models and a disingenuous use of the English language to sway public opinion.

So as not to repeat what others have already written about a speech that, one day, will probably rival (if not exceed) in ignominy the Fed chairman’s “helicopter speech” from early in the last decade, a brief recap of others’ observations is in order.

But, before even that, it is worth noting that, in a sign of how quickly things may be changing for the central bank chief, Google now finds more matches when the current Fed Chairman’s name is combined with the word “failure” than when using the former Fed Chairman’s name:

Whether the relationship between these two has changed in recent days as a result of this speech is not known, but, on its face, it is surely not a good omen and bears close watching as the Fed chairman’s confirmation vote in the full Senate approaches.

Early on Monday, Barry Ritholtz at The Big Picture argued that bond managers reaching for yield due to record low short-term interest rates was a direct consequence of monetary policy, one of many factors that contributed to the financial market meltdown.

What Bernanke seems to be overlooking in his exoneration of ultra-low rates was the impact they had on the world’s Bond managers — especially pension funds, large trusts and foundations. Subsequently, there was an enormous cascading effect of 1% Fed Funds rate on the demand for higher yielding instruments, like securitized mortgages (Yes, I laid all this out in the book).

Barry then supplied a ten step causation timeline that began with low yields and ended with a collapsed credit system, touching upon mortgage backed securities, ratings agencies, and derivatives along the way, reinforcing the point that step one was “lower interest rates”, not “beef-up regulation”, what we know now is a recipe for disaster.

The failure of effective regulation was the key to the systemic failure in Bernanke’s view, however, John Carney at ClusterStock took issue with this line of thinking.

Bernanke makes the extraordinary claim that regulatory and supervisory policies would have been effective means of addressing the run up in housing prices. What makes this claim so extraordinary is that it completely ignores the fact that regulatory and supervisory policies weren’t just ineffective at popping the housing bubble—they were actively fueling it.
…
This is why Bernanke’s view is so disturbing. He urges “stronger regulation” but shows no awareness of the culpability of regulations for the bubble. Or, more charitably, he only acknowledges that the regulatory response was inadequate rather than wrong headed.

The claim that better regulation will prevent this from happening next time (or, now, since rates are even lower today than in 2003), reminds me of former Fed chief Alan Greenspan’s oft-cited remedy for restoring American competitiveness in the world when queried on the subject during Congressional hearings – better education.

Better regulation is the financial word’s Holy Grail just as better eduction is the unachievable goal for elected officials who promise their constituents that their children’s lives will be as good as their own (we seem to have long since given up on “better than their own”).

I don’t know. I suppose that if I were the Fed chairman and set out to defend the central bank and its policies, this would be the approach that I would take too. Otherwise it brings into question the very nature of the last 50 years of higher education in economics.

As for higher learning in the dismal science and the vaunted economic “models” that seem to have failed so badly in recent years, Caroline Baum at Bloomberg noted that Bernanke’s defense of monetary policy even had to take liberties with that.

Bernanke takes great pains to rebut criticism that the funds rate was well below where the Taylor Rule, developed by Stanford economist John Taylor, suggested it should be following the 2001 recession. The Taylor Rule uses actual inflation versus target inflation and actual gross domestic product versus potential GDP to determine the appropriate level of the funds rate.

It shouldn’t be too surprising that the co-creator of the Taylor Rule wasn’t too happy about all of this. According to this Reuters report, Taylor said, “The evidence is overwhelming that those low interest rates were not only unusually low but they logically were a factor in the housing boom and therefore ultimately the bust” .

Well, apparently, if something doesn’t exist in the Fed’s models (however they might be tortured and twisted to produce the desired answer), then it can’t exist in the real world, and that is what, in my view, was most disturbing about Bernanke’s speech – the nearly blind reliance on models that the Fed creates.

This is best demonstrated by the following excerpt and graphic:

With respect to the magnitude of house-price increases: Economists who have investigated the issue have generally found that, based on historical relationships, only a small portion of the increase in house prices earlier this decade can be attributed to the stance of U.S. monetary policy. This conclusion has been reached using both econometric models and purely statistical analyses that make no use of economic theory.

To demonstrate this finding in a simple way, I will use a statistical model developed by Federal Reserve Board researchers that summarizes the historical relationships among key macroeconomic indicators, house prices, and monetary policy … For our purposes, the value of such a model is that it can be used to predict the behavior of any of the variables being studied, assuming that historical relationships hold and that the other variables in the system take on their actual historical values.

Slide 6 illustrates the application of this procedure to the federal funds rate and housing prices over the period from 2003 to 2008. In the left panel of the figure, the solid line shows the actual history of the federal funds rate. The shaded area in the figure is constructed using the results of the statistical model; it shows the range of possible outcomes that would be considered “normal” for the federal funds rate, assuming that the other six variables included in the model took their actual values during the years 2003 through 2008. Values of the federal funds rate that fall in the shaded area are relatively “close to” (technically, within 2 standard deviations of) the corresponding forecast values. In line with our earlier discussion, the left panel of the figure suggests that, although monetary policy during the period following the 2001 recession was accommodative, it was not inconsistent with the historical experience, given the macroeconomic environment of the time.

The right panel of the figure shows the forecast behavior of house prices during the recent period, taking as given macroeconomic conditions and the actual path of the federal funds rate. As you can see, the rise in house prices falls well outside the predictions of the model. Thus, when historical relationships are taken into account, it is difficult to ascribe the house price bubble either to monetary policy or to the broader macroeconomic environment.

In short, since the models prepared by the Fed economists indicate that short-term rates were at the right level, they had to have been correct. Moreover, the models still don’t show a housing bubble and, therefore, it can’t be the fault of the economists that they missed it, the very idea that “correct” monetary policy was somehow involved in the financial crisis now probably being viewed as preposterous and, perhaps, a running joke amongst the central bank’s deepest thinkers.

Can there be a more disappointing revelation about the state of contemporary economics?

Bernanke goes on to suggest that “changes in the methods of mortgage finance” may be involved somehow in the failure of their models to see the housing bubble in advance, but, that neatly turns back into a question of regulation, the failure of the collective foresight of hundreds of PhD economists and their “models” quickly forgotten.

The one thing that has always bugged me about the dismal science is that far too many of its practitioners fail to pull their noses up out of their textbooks, theories, and models long enough to look at what is happening in the real world.

Alas, even if they did, it’s not clear if they would have even recognized the many dangers that were so obvious to so many of us back in the early part of the decade that just concluded.

Lastly, the part about this speech that has compelled me to seriously consider changing the text below the title of my humble little blog (as readers have been urging me to do for a few years now) from:

can be found toward the end of the speech, just at the beginning of the section on conclusions and policy recommendations:

House prices began to rise in the late 1990s, and although the most rapid price increases occurred when short-term interest rates were at their lowest levels, the magnitude of house price gains seems too large to be readily explainable by the stance of monetary policy alone.

Now, this is a common little trick that many writers (including myself) use when they want to state something emphatically but, in their heart of hearts, might not really believe it and, more importantly, don’t want to go that far out on a limb anyway for fear of it coming back to haunt them. Some people are masters at this and, sometimes, you really have to pay close attention to little words that are inserted into sentences, such as the word ‘alone’ above.

Without that little word, the meaning changes entirely.

But, when that little word is included, the writer can always claim that he never said something that most people believe that he did say and, while this may be a trivial issue for most matters, it is very important when decades of economic theory are being questioned as never before and the future of the global economy hinges on whether or not low interest rates played a key role in the 2008 financial market crash.

Gold Stocks & The Market Forecast for 2010