Still all in on Gold and the Gold sector. My Gold is not for sale or trading, it is my cash and cash is king in a secular bear market. My Gold stocks are speculative vehicles with significant inherent risk that I largely trade in and out of, for better or for worse. I remain rabidly bullish on Gold and Gold stocks at current levels.

My horizon on Gold stock trades tends to be a few weeks to several months (i.e. sort of a “swing” trader if you will) – I plan on months when the trade begins but will take profits on any Gold stock that gets significantly overbought even if it is only a week after I buy it. Volatility can be a friend or enemy in the Gold stock sector. I am not married to any one Gold stock and I am not qualified to accurately analyze the fundamentals of any one firm as I lack a mining background. The Gold stock sector is a fundamental and cyclical play for me based on the macroeconomic picture, but I lack the needed skills to be a guru stock picker in the sector. It won’t be me that discovers the next “can’t lose,” “ten bagger” Gold stock unless it is by dumb luck.

However, I am also aware that even turkeys are going to fly in the Gold sector, much as in the internet mania of the 1990s. And make no mistake about it, we will have a Gold stock mania before this decade long secular Gold bull market is over. The secular Gold bull has a long ways to go and the wall of worry is intact. The monetary storms remain with us and aren’t going away any time soon, whether you are an inflationist, deflationist, both, or don’t care.

But back to get rich or die tryin’ – why am I so bullish right now on Gold stocks and how will I know it is time to take some money off the table? Well, first, let me say that I often book some profits along the way in big bull runs by either selling individual Gold stocks that have gotten ahead of themselves based on daily or weekly momentum indicators (and then moving profits to oversold Gold stocks) or by selling covered calls against the stocks or long-dated options I hold on Gold stocks and ETFs.

Bigger picture wise, however, there is a point in the next 5 months or so when I will likely not want to be long in the Gold stock sector at all. If you’re a buy and hold investor, the following trading nonsense does not apply to you, but may provide some encouragement regarding the immediate near-term future. My need to trade may be my undoing, but c’est la vie in the speculative world and this is why I do not speculate with all of my savings.

Gold stocks typically peak in the March to May time frame when a speculative intermediate bull run cycle begins in the fall. Seasonally, we are in the sweet spot for Gold stocks after a typical correction that I believe completed in December. Seasonals don’t always work, but when they line up in a particular year, they generally provide a supportive wind for Gold stocks.

Second, major Gold stock indices generally peak after a significantly overbought reading develops on the basic RSI momentum indicator using a WEEKLY chart (i.e. at the end of a 6-12 month bull “run” that Gold stocks tend to have). Here’s a weekly 10 year log scale candlestick chart of the $HUI Gold Bugs Mining Index to show this concept over the entire course of the current secular Gold stock bull market, which is far from over: 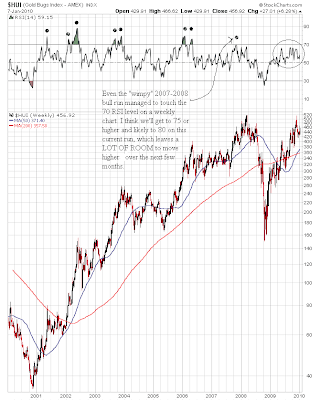 Third, the move in Gold stocks is supported by fundamentals. Yes, fundamentals, those things that don’t matter any more in the general stock and bond markets. If corporate junk bonds (a la the JNK and HYG ETFs) can best their 2007 nominal highs at a time of record corporate default rates, then don’t talk to me about Gold miners not making any money! The “real” price of Gold, as taught to me by the writings of Bob Hoye, remains at multi-decade highs (a crude measure of Gold mining profitability obtained by dividing the nominal price of Gold by the nominal price of a basket of commodities) while Gold stock indices have yet to see new all-time nominal price highs. This is set to change as Gold stocks get set to break out to new highs.

Along the same fundamental lines, we are in an economic environment where the Dow Jones Industrial Average is declining relative to Gold. Such periods of a falling Dow to Gold ratio correspond with secular Gold stock bull markets and secular general stock bear markets. The swinging pendulum of history has not yet swung far enough away from Wall Street to complete the secular bear market in general equities.

Finally, history proves beyond a shadow of a doubt that Gold stocks can rise even if the bear market resumes, a la late 2000-2003 and the 2007-March 2008 bull run. Gold stocks have already had their crash and the fall of 2008 was the best buying opportunity for Gold stocks since the late 2000 secular lows. The stock market can go down, but Gold stocks are going to keep going up. Of course, speculating is not risk free and if a true second stock market “crash” were to occur, Gold stocks would not be immune from the down draft. If you can’t stand the heat, put your money in safe physical Gold and sleep well at night.

This bullish message on Gold and Gold stocks is not gloom and doom, this is not a message of the apocalypse (at least not in my mind), you don’t have to live in a log cabin or eat your barbarous relic to survive and the economy will eventually recover, like it always does. However, it is important to simply recognize where the true secular bull market lies and ride it – sometimes bull markets go up because they are going up. As an example, Gold and Gold stock bulls need to stop worrying so much about the U.S. Dollar Index in my opinion.

I think the “sweet spot” for the Gold stock indices lies dead ahead and will correspond with new nominal highs for Gold and silver. I see the GDX ETF making it to 75 or more, the GDXJ ETF at 45 or higher and the $HUI headed for 750 or higher. Gold should reach at least $1350/oz and $1750 wouldn’t surprise me before the spring is over. Rational exuberance remains my theme in the Gold patch, with a mind to book some profits along the way when things get overheated on the shorter term daily charts. Paperbugs like Roubini and the staff over at bloomberg.com certainly won’t agree with my current thesis, but I’m still here and still bullish on all things Gold. 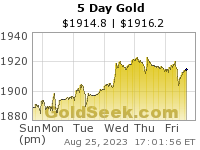 The mess that Bernanke is making worse