Since the end of December we’ve been writing about the coming bottom in precious metals. Our forecast for 2013 was to see a low in Q1 and then continued consolidation until the end of the summer in which Gold could be in good position to break $1800. That forecast remains largely intact, although it appears the mining stocks will bottom quite a bit lower than we thought two months ago and even five months ago. Three weeks ago we noted that a potential final bottom was on the way. After beating around the bush we are ready to say that now is the time to begin buying and we’ll show you why.

Let’s zoom in on the short-term for GDX as we prefer it to the HUI above. We already know the major support trendline (for the sector) is nearby. The sector is approaching that support in an extreme oversold condition. GDX has shed 31% in the past five months and 18% in just 21 days. Moreover, note the three open gaps and how they’ve occurred following an already substantial decline. Hence, these gaps are a reflection of emotion which leads to panic. If we see a final gap then it is likely to be an exhaustion gap which would signal a reversal is imminent.

For Gold & Silver I show weekly candle charts as they give us an idea of the bigger picture. That picture is one of long consolidation after significant gains following the 2008 low. Recall the price action from 2009 to the 2011 peaks. Gold gained from $950 in the summer of 2009 to a peak of $1923 in the summer of 2011. In the same period Silver went from $13 to $49. Folks, these are massive moves that take time to be digested. By time we mean quarters to years, not weeks or months. As we sometimes try to decipher every wiggle, it’s easy to forget that point. Turning back to the present, pay attention to how the metals close this week and the next few weeks. There is major support at these levels and we expect to see the metals hold the ranges denoted on the chart. 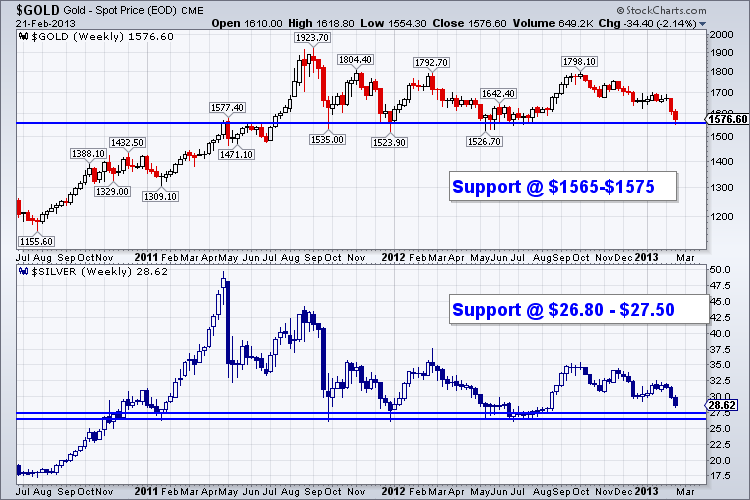 Let’s throw in the S&P 500 for a little intermarket analysis. We have the gold stocks extremely oversold and Gold and Silver at major support while conventional equities are nearing major resistance. Which side seems to be a better buy right now? Moreover, note how each subsequent advance is getting weaker as well as shorter. Mainstream pundits like to laud this as a great bull market. The S&P rebounded 105% in the first two plus but in the 22 months since it is up only 8.8%. This is hardly a resemblance of a new secular bull market. Go look at 1942 to 1946 and 1982-1986 to see how secular bull markets actually begin. The S&P 500 has a cyclical bear market in between now and the start of the next secular bull.

Jason Goepfert the brilliant creator of sentimentrader.com, notes that Gold’s public opinion is at its second lowest reading in a decade. Gold has declined in price since this data was updated. Perhaps it could reach the lowest in 10 years?

Meanwhile, in other sentiment news, Dan Norcini notes that hedge fund short positions in Gold are at a 5-year high and Bloomberg noted that bets on higher Gold prices fell to the lowest since 2008.

I stumbled upon this chart which I think is from Option Strategist. It shows the weighted put-call ratio for GDX. It’s at a 27-month high. 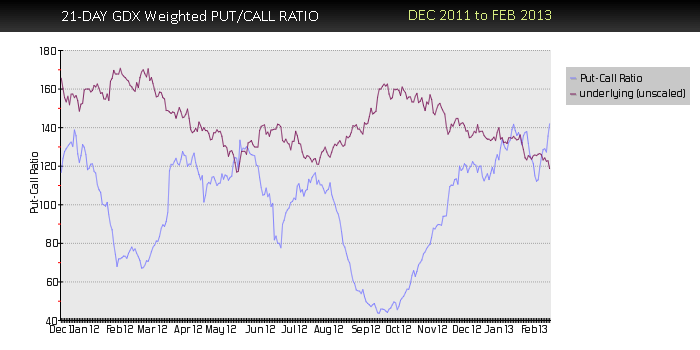 Another from sentimentrader.com is data from the Rydex Precious Metals Fund. This is a fund focused on mining stocks. Assets in the fund have declined 50% in just the past four months! From Q1 2011 to Q2 2012, assets gradually declined. Recent action shows panic and capitulation. Relative to all sectors, this fund’s assets are inches away from reaching a minimum of a six-year low. 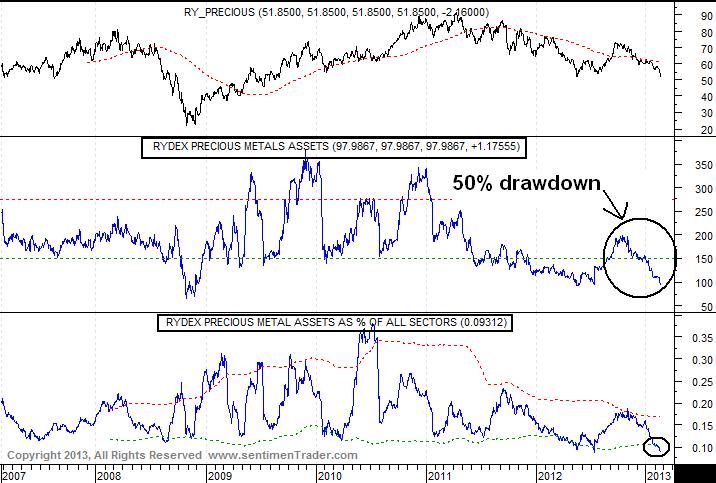 The technicals show the precious metals complex as extremely oversold and nearing strong support. This coincides with extremely negative sentiment which is bullish from a contrary perspective. Anecdotally speaking, I am amazed at the explosion of negative press in just the past few days. I can’t remember anything like it since I began following this market in 2002. Some stocks may have already bottomed while the HUI/GDX could have one nasty day left. We have begun to layer into a few positions and will continue to next week. If you have cash, now is the time to use it on both the metals and the stocks. If you’d be interested in professional guidance in uncovering the producers and explorers poised for big gains then we invite you to learn more about our service.

Corvus Gold is Positioned to Ride Out the Gold Volatility