Chart 1: The strong US Dollar rally is finally showing signs of weakness

Source: Fin Viz (edited by Short Side of Long)

Over the last few sessions, we have potentially seen first signs of weakness in the powerful US Dollar rally, which started in early July of last year. While I do not think the US Dollar bull market is over yet, there is a potential for a serious correction in coming weeks and/or months. Obviously, this should impact many asset classes, which I wrote about several weeks ago:

If the correction in the US Dollar would occur in coming weeks, it might boast many different asset classes. Firstly, the dramatic crash in Crude Oil could finally find some sort of footing. Stabilisation in energy prices could help energy stocks as well. Foreign currencies such as Japanese Yen and Australian Dollar find themselves at major historical support levels of 120 yen and 0.80 cents, so both of these could rebound for awhile.

Emerging market currencies have been under pressure recently, so a peak in the greenback could stabilise these currencies and put a bid under the extremely cheap emerging market equity complex. Finally, as already discussed in previous posts, Gold has been holding up well despite the Dollar rally. Therefore, Dollar weakness might only further strength Gold as it attempts to break out into a new uptrend.

US Dollar could correct for awhile, either in a form of a prolonged consolidation or even possibly an initial sharp reversal sell off. The truth is, bullish sentiment on the currency is ridiculously high and a major shake out could occur at any point in time. If we observe Chart 2, we can see that the Public Opinion (thanks to SentimenTrader website) has been at nose bleed levels and recently hit a record high.

At the same time, commitment of traders report (thanks to CFTC), shows that hedge funds and other speculators hold an extremely high level of net long contracts. Every man and their grandmother expect higher US Dollar. Honestly, so do I, as I’ve been long since the summer months of 2014. All of this means that the trade is probably overdone, way too loved, over-owned and overbought… at least in the short term.

Pay attention to the USD index in the next few weeks!

Chart 3: Hedge funds continue to heavily sit on the long side of the trade 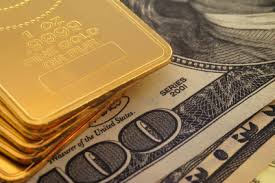 Impending US$ Peak Should be Catalyst for Gold