I was busy at work Friday and unable to watch the markets at all. When I got home, needless to say, I was quite surprised by the action. Also, quite pleased that I didn’t watch it in real time. My only regret is that I didn’t get a chance to buy more Gold bullion when it dipped below $1050.

Gold stocks finished the day very strong. All the needed evidence is in the chart of the GDX ETF, which recorded its HIGHEST EVER DAILY VOLUME on Friday. This is not an insignificant event given the the percentage gains in the GDX on a day when Gold barely managed to get back to even after a scary rapid plunge below $1050. Here’s a 6 month daily chart to show the action: 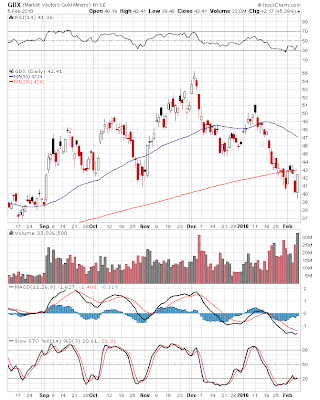 One last head fake to squeeze out some more weak hands. And it was a helluva head fake, to be sure. Now it is time for Gold stocks to outperform the price of Gold and make a strong move higher. If they can’t/don’t, I’ll be out of my shorter-term trades on the bounce to re-enter later. The bounce should be good for at least a few weeks.

I wanted to re-visit a long term chart recently posted by Steve Saville showing the lack of leverage for large cap Gold stocks relative to bullion over the last 50 years: 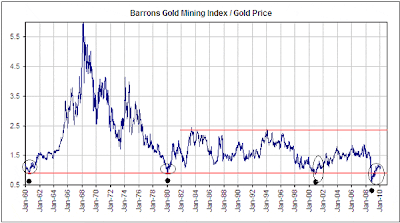 There are a few important point to notice in this chart. The first is the circled areas that show equivalent points in time in these ratios. The next move should be up, as senior Gold stocks are historically undervalued. Second, if you are in the inflation camp, look at the 1971-1980 period. Once Gold was allowed to float, it far outperformed senior Gold stocks until the Gold price peaked in January of 1980.

This is why I keep accumulating physical Gold as a long term hold and why I trade the Gold stocks (instead of buy and hold), for better or worse. By buying Gold stocks when they are oversold and undervalued, there is a high likelihood of a successful intermediate-term trade. Nothing is guaranteed and speculating is risky, which is why I don’t trust myself to use chart squiggles to trade physical Gold (I just keep accumulating more on weakness). Though I keep trying and keep learning, I haven’t proven to be a particularly good trader so far. It is my hope that 2010 will turn that around a little as I believe I am now long in one of the best trades for 2010: long Gold stocks.