Mining is a tough business and profits are rarely easy to come by. I learned the concept of the “real” price of Gold from Bob Hoye at Institutional Advisors. This concept ignores the nominal price of Gold (i.e. ignores the currency effect, which is difficult for paperbugs but easy for long term Gold bulls) and focuses on the price of Gold relative to the price of other commodities as a ratio. Mr. Hoye has his own proprietary index, but as we all stand on the shoulders of giants before us, I use my own proxy of this ratio by dividing the Gold price by other commodities indices (I typically use the Continuous Commodities Index [$CCI]).

First, wealth is relative. If Gold goes to $2000/oz but oil goes to $10,000 per barrel, then Gold investors are poorer if they need to use energy/in energy terms. Deflation in Gold terms has been here for a decade – it is only when paper currency is introduced into the equation that things get confusing. Let’s say Gold starts today at around $1175/oz and a house in your neighborhood costs $200,000 today. In a year, if Gold falls to $800/oz (not saying it will) and the house in your neighborhood costs $100,000 at that time are you richer or poorer? Well, both! In nominal terms, you are poorer. In other words, if your main goal in life is to accumulate as many pieces of paper issued by the unconstitutional, non-federal, for-profit federal reserve corporation, you are poorer. However, if your main goal is to buy a house some day, you are wealthier in this scenario.

As a strong believer in Gold during the Kondratieff Winter cycle that we have entered (it ain’t over yet, trust me), I believe paper currencies will also deflate relative to Gold rather than gain value relative to Gold as people like Bob Prechter think. It’s a subtle but important investing concept when one looks over the longer term horizon and tries to protect wealth. Because I believe the deflationary forces in the economy are strong, I believe it is possible that U.S. Dollars can be significantly devalued and yet gain in value relative to real estate and general stocks. But holders of any of these asset classes I believe will lose wealth in Gold terms.

In other words, I believe Gold will buy more paper federal reserve notes (i.e. nominal price of Gold will rise), more real estate and more general stocks in the future. This is not a mainstream concept, as it gets to the core of what true money is likely to be this cycle during the continued economic and debt storms the global economy is facing. Confidence in the U.S. system and its central bankstaz will decrease further as this secular economic crisis proceeds. This is why creditor central banks of the world are now net buyers of Gold – they want to take their excess paper reserves and convert them into a reliable store of wealth.

Such a trend change by central bankstaz in buying Gold is not a brief blip. This is not a “get rich quick” trading scheme happening here. This is a secular shift that will continue for some time to come in my opinion. China is not telling their population to buy silver and Gold and making it easy for them to do so because they want their people to lose their hard earned money. Accumulation of U.S. Dollars over the longer term is now seen as relatively unwise. You may buy this concept or not, and it is not they key point of this discussion.

The second reason the concept of the “real” price of Gold is important relates to the Gold miners. Producing Gold miners can make more money when expenses are decreasing relative to the price of Gold, regardless of what the price of Gold is doing in nominal terms. Like the Wal Mart model, you can cut prices and make higher profits as long as your costs are falling even faster than prices are. The most obvious component of the cost equation is energy, as mining is an energy intensive business. If Gold drops 30% but oil drops 70% (like last fall, for example), Gold miners can make higher profit margins (again, all things being equal, which they are not for individual firms). Higher profit margins can translate into higher profits, which can (not does, but can) translate into higher dividends and/or higher stock prices.

Now, this concept can be attacked and is not fool proof but it gets to the heart of how Gold miners make money. This is why a deflationary environment is more consistently bullish for Gold miners than an inflationary one. Think of the 2007 to early 2008 period when oil was going ballistic – even though the Gold price was rising beautifully towards $1000/oz, oil was rising even faster and further and many Gold miners were unable to increase profits during this time. During a secular credit contraction (again think in Gold terms, not in terms of paper currency units), commodity prices fall relative to the Gold price over long periods of time.

Recent short term action has been bullish for the Gold miners in this regard. Here’s a 2 year weekly candlestick chart of the Gold price divided by the CCI commodity index ($CCI): 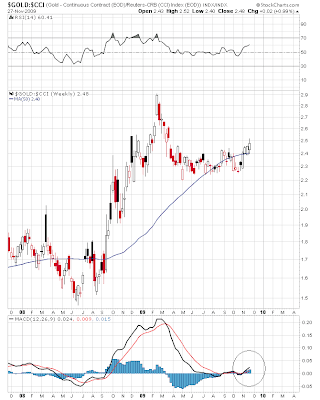 If this is an early stage rise in this ratio (I think it is, but only Mr. Market knows for sure), it is bullish for the fundamental underpinnings of a significant continuation of the new cyclical Gold stock bull market that began in late 2008. Again, this is fundamental data, not a trading signal. In fact, the lag between a rising Gold:$CCI ratio and rising Gold stock prices can be significant and ironically, a ratio of Gold to oil or a basket of commodities is often rising at a time when the stock market is not doing very well. Gold stock charts should be evaluated and traded based on their own technicals, not based on the chart of the Gold to commodities ratio. However, a rise in this key Gold ratio indicates that the fundamentals for Gold stocks are improving. Because investors are forward looking, it also suggests that fundamentally, Gold in the ground for Gold explorers and developers may be valued higher based on its higher profit potential.

When looking over the longer term, one can see that the secular turn in the Gold:$CCI ratio occurred in the 2001 time frame and appreciate just how big a move happened in the Gold to $CCI ratio in 2008 (20 year monthly log scale candlestick chart of $GOLD:$CCI follows): 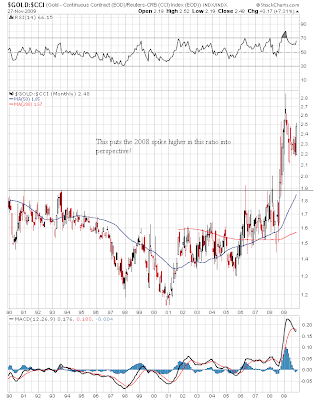 The massive spike that occurred in this ratio during the Great Fall Panic of 2008 (which the feds and government were unable to prevent despite all their market intervention leading up to this point) has not yet been fully priced into the Gold miners. If it was, major Gold mining indices would be at significant new all-time highs. If this ratio can maintain at current lofty levels (let alone go higher, which I think it will) for the next few months, I believe the Gold mining sector is going to have a volcanic explosion to the upside in 2010 regardless of what the general stock market does.